6 ways reindeer are adapted for extreme cold. Known as caribou in North America, reindeer live in very cold regions such as Alaska and Scandinavia. 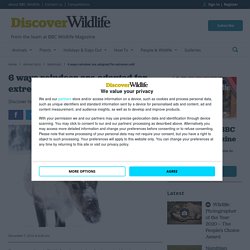 Can this tiny owl survive in one of America's fastest-growing states? In a desert valley outside Tucson lives a fierce predator that weighs less than a deck of cards. 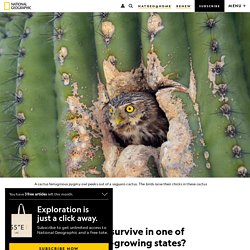 The cactus ferruginous pygmy owl, which nests in the Sonoran Desert’s iconic saguaro cactus, routinely takes down prey twice its size. “It’s the most ferocious raptor I’ve ever worked with,” says biologist Michael Ingraldi with the Arizona Game and Fish Department. But this six-inch-tall bird with its piercing golden stare is no match for threats such as urban sprawl, border wall construction, and climate change that are closing in from all sides, jeopardizing its existence in the most northern part of its range. A subspecies of the widespread ferruginous pygmy owl, the cactus ferruginous pygmy owl is limited to Arizona, northern Mexico, and a small portion of southern Texas. At the turn of the 20th century, the bird lived as far north as Phoenix, but now its Arizona range has drastically shrunk to just one area—the 20-mile-wide Altar Valley, which extends to the U.S.

'Murder hornets' have arrived in the U.S.—here's what you should know. Two unusual hornets—striking, with orange and black markings and long stingers—were spotted near Blaine, Washington, in late 2019. 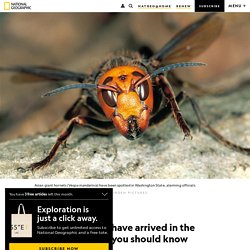 Subsequent investigation revealed they were Asian giant hornets, the world’s largest wasps, growing nearly two inches in length. Scientists are concerned that these hornets could spread throughout Washington State and beyond, presenting a danger to U.S. bees—which are already in decline—and humans. Nobody knows how the insects arrived in the United States. But the discoveries set off alarms and the insects began trending on social media as "murder hornets.” These predators, native to East Asia and Japan, are infamous for decimating honeybee colonies. Some of Australia’s Smallest Species Could Be Lost to Wildfires. SYDNEY, Australia — When Tanya Latty, an entomologist at the University of Sydney, started studying a species of velvet worm 18 months ago, she thought it was just a side project. 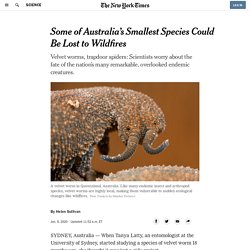 “It’s an adorable, adorable animal,” she said, speaking on the phone from her home in Sydney. The worms — which comprise the phylum Onychophora, are cousins of arthropods and somewhat resemble caterpillars — have a “beautiful blue velvety texture” and “cute little stubby antenna,” Dr. Latty said. The worms sleep together in a pile, she noted, and for that reason she and her colleagues have been trying to popularize the phrase “a cuddle of velvet worms” as a collective noun. 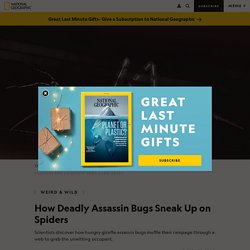 But they’re no match for a killer bug that can outwit a spider’s powers of vigilance, new experiments show. Giraffe assassin bugs have learned to squelch the vibrations they make as they tear through webs to reach their eight-legged prey, according to a study published in this week’s Royal Society Open Science. The bug even turns the wind to its advantage, deliberately targeting spiders when a blowing breeze will mask its approach. “For the spider, the bug must be the bogeyman,” says study author Fernando Soley, who did the research at Australia’s Macquarie University and is now at the University of Costa Rica. “Because it hits you out of nowhere, and it’s scary.” Tough Prey Anything that wants to eat a spider is aiming high. 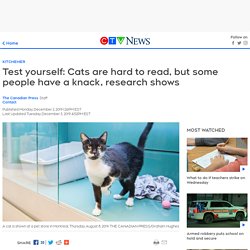 In a recent study, researchers at the University of Guelph decided to look at how well people were able to read the expressions on cat faces. They showed 6,300 people from 85 countries a series of 20 short cat videos pulled mostly from YouTube. After watching the videos, which showed only the felines' faces, people were asked to rate whether the cat was happy, unhappy, or simply inscrutable. The respondents got about 12 faces right on average, which was just slightly better than chance.

A small group of people were remarkably accurate -- slightly more than one out of 10 scored better than 75 per cent. The "cat whisperers" were likely to be young and female. Why Is Your Cat So Disgusted With You? Questions and answers - Krokodille Zoo. 25 Reasons The Animal Kingdom Is More Ridiculous Than You Thought. Rodent. Size and range of order[edit] Characteristics[edit] Dentition[edit] Typical rodent tooth system Nearly all rodents share the characteristic of dentition highly specialized for gnawing. 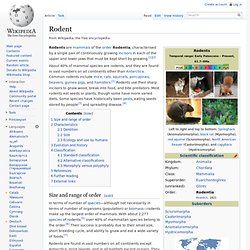 This specialization gives rodents their name from the Latin, rodere, to gnaw.[9][10] All rodents have a single pair of upper and a single pair of lower incisors, followed by a gap (diastema), and then one or more molars or premolars; Paucidentomys vermidax is unique among the rodents in that it possesses no molars or premolars, and its incisors are so specialised, they are not for gnawing.[11] Size[edit]