Space habitat. Interior view of an O'Neill cylinder, showing alternating land and window stripes A space habitat (also called a space colony, space settlement or orbital colony) is a type of space station, intended as a permanent settlement rather than as a simple way-station or other specialized facility. 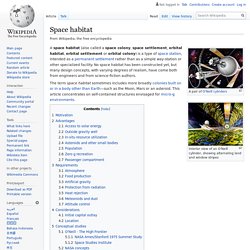 No space habitats have yet been constructed but many design proposals have been made, with varying degrees of realism, by both engineers and science fiction authors. The term space habitat is sometimes used more broadly to include colonies built on the surface of a body other than Earth, such as the Moon, Mars or an asteroid. This article concentrates on self-contained structures built in micro-g environment. Motivation[edit] Several motivations for building space colonies have been proposed: (See: Reasons for space colonization or Space and survival.) Advantages of space habitats[edit] A number of arguments are made for space habitats having a number of advantages: Access to solar energy[edit] In 1977 Dr.

Asteroid mining. Artist's concept of asteroid mining Asteroid mining is the exploitation of raw materials from asteroids and other minor planets, including near-Earth objects.[1] Minerals and volatiles could be mined from an asteroid or spent comet then used in space for in-situ utilization (e.g. construction materials and rocket propellant) or taken back to Earth. 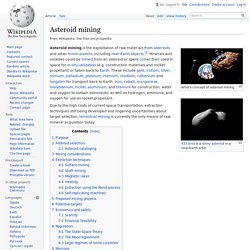 Comet. Comets usually have highly eccentric elliptical orbits, and they have a wide range of orbital periods, ranging from several years to potentially several millions of years. 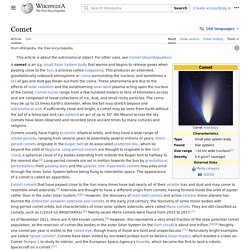 Short-period comets originate in the Kuiper belt or its associated scattered disc, which lie beyond the orbit of Neptune. Long-period comets are thought to originate in the Oort cloud, a spherical cloud of icy bodies extending from outside the Kuiper belt to halfway to the next nearest star. Long-period comets are directed towards the Sun from the Oort cloud by gravitational perturbations caused by passing stars and the galactic tide. Hyperbolic comets may pass once through the inner Solar System before being flung out to interstellar space. Etymology[edit] Galactic tide. A galactic tide is tidal force experienced by objects subject to the gravitational field of a galaxy such as the Milky Way. 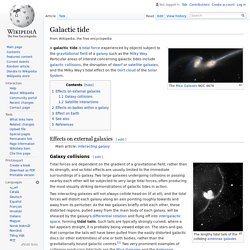 Particular areas of interest concerning galactic tides include galactic collisions, the disruption of dwarf or satellite galaxies, and the Milky Way's tidal effect on the Oort cloud of the Solar System. Effects on external galaxies[edit] Galaxy collisions[edit] Tidal forces are dependent on the gradient of a gravitational field, rather than its strength, and so tidal effects are usually limited to the immediate surroundings of a galaxy.

Two large galaxies undergoing collisions or passing nearby each other will be subjected to very large tidal forces, often producing the most visually striking demonstrations of galactic tides in action. Two interacting galaxies will not always collide head-on (if at all), and the tidal forces will distort each galaxy along an axis pointing roughly towards and away from its perturber. Satellite interactions[edit] Solar System. The Solar System formed 4.6 billion years ago from the gravitational collapse of a giant interstellar molecular cloud. 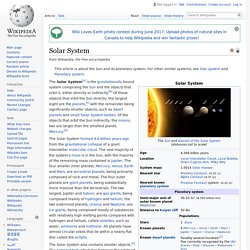 The vast majority of the system's mass is in the Sun, with most of the remaining mass contained in Jupiter. The four smaller inner planets, Mercury, Venus, Earth and Mars, are terrestrial planets, being primarily composed of rock and metal. The four outer planets are giant planets, being substantially more massive than the terrestrials.

The two largest, Jupiter and Saturn, are gas giants, being composed mainly of hydrogen and helium; the two outermost planets, Uranus and Neptune, are ice giants, being composed mostly of substances with relatively high melting points compared with hydrogen and helium, called ices, such as water, ammonia and methane. All planets have almost circular orbits that lie within a nearly flat disc called the ecliptic. Discovery and exploration. Earth. Earth (otherwise known as The World,[n 5] in Greek: Γαῖα Gaia,[n 6] or in Latin: Terra[26]) is the third planet from the Sun, the densest planet in the Solar System, the largest of the Solar System's four terrestrial planets, and the only astronomical object known to harbor life.

Chronology Formation Artist's impression of the early Solar System's planetary disk Geological history Earth's atmosphere and oceans formed by volcanic activity and outgassing that included water vapor. A crust formed when the molten outer layer of Earth cooled to form a solid as the accumulated water vapor began to act in the atmosphere. Terminator (solar) Moon. The Moon is in synchronous rotation with Earth, always showing the same face with its near side marked by dark volcanic maria that fill between the bright ancient crustal highlands and the prominent impact craters. 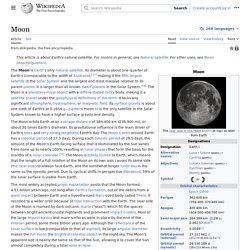 It is the second-brightest regularly visible celestial object in Earth's sky after the Sun, as measured by illuminance on Earth's surface. Its surface is actually dark (although it can appear a very bright white) with a reflectance just slightly higher than that of worn asphalt. Its prominence in the sky and its regular cycle of phases have made the Moon an important cultural influence since ancient times on language, calendars, art, and mythology.