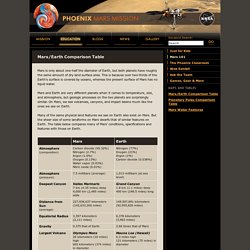 This is because over two-thirds of the Earth's surface is covered by oceans, whereas the present surface of Mars has no liquid water. Mars and Earth are very different planets when it comes to temperature, size, and atmosphere, but geologic processes on the two planets are surprisingly similar. On Mars, we see volcanoes, canyons, and impact basins much like the ones we see on Earth. Many of the same physical land features we see on Earth also exist on Mars. 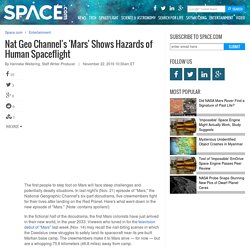 In last night's (Nov. 21) episode of "Mars," the National Geographic Channel's six-part docudrama, five crewmembers fight for their lives after landing on the Red Planet. Here's what went down in the new episode of "Mars. " (Note: contains spoilers!) In the fictional half of the docudrama, the first Mars colonists have just arrived in their new world, in the year 2033. Viewers who tuned in for the television debut of "Mars" last week (Nov. 14) may recall the nail-biting scenes in which the Daedalus crew struggles to safely land its spacecraft near its pre-built Martian base camp. Though the Daedalus spacecraft, which is designed like SpaceX's reusable rockets, was built to be able to lift off and land again, there isn't enough fuel left to restart the engines and hop on over to base camp. During the ride to base camp, it becomes clear that Cmdr. "We knew Mars wouldn't welcome us," Cmdr. Five Problems With Sending Humans to Mars — SpaceBounder.

High doses of cosmic and solar rays can have adverse affects on the central nervous system, such as: impaired cognitive function and motor skills, behavioral changes, and a slightly increased risk of developing fatal cancer at some point in any given astronaut's lifetime. Extreme exposure could potentially lead to radiation sickness, and symptoms which include nausea, vomiting, fatigue, and loss of appetite. NASA currently holds the position that any spacecraft heading for Mars with a human crew on board will need to incorporate an increased amount of radiation shielding—the more the better.

But with added shielding comes added weight to the spacecraft, and every added kilogram could prolong the journey to Mars, leaving astronauts exposed to cosmic and solar rays for even longer periods of time. Further reading: "What were you saying about that deadly space radiation? Here are the facts. " Problems For A Realistic First Settlement On Mars / Human missions / New Mars Forums. The first settlement would come after exploration missions to Mars with the crews returning home. 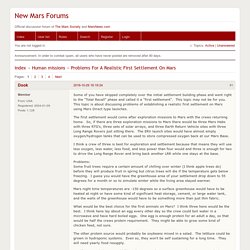 So, if there are three exploration missions to Mars there would be three Mars Habs with three RTG's, three sets of solar arrays, and three Earth Return Vehicle sites with three Long Range Rovers just sitting there. The ERV launch sites would have almost empty oxygen/hydrogen tanks that can be used to store compressed oxygen back at our Mars Base. I don't see why you can't have continuous and expanding settlement. So crews overlap. I don't see either why you would have three separate sites.

Use of RTGs rather than solar panels is a matter of preference in my view. I think a crew of three is best for exploration and settlement because that means they will use less oxygen, less water, less food, and less power than four would and three is enough for two to drive the Long Range Rover and bring back another LRR while one stays at the base. Why Getting to Mars is Not So Easy. Recently, the ESA ExoMars mission lost contact with its Schiaparelli Martian Lander during its descent. 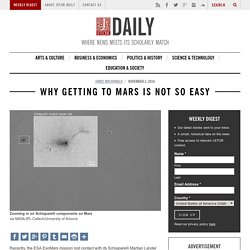 Images showed that the lander crashed—hard—and exploded upon impact. The main mission of sampling atmospheric gasses continues without the lander. But the lander’s destruction is hardly unprecedented. Despite some spectacular successes, Mars missions have a long history of failure. Four out of the first five attempts, all by the USSR, failed to leave orbit, and the 5th lost communication. There is a reason Mars has a reputation as a graveyard for spacecraft. In 1971, the first landing was attempted, again by the USSR. What went wrong? NASA study shows that space travel affects spine of astronauts. Oct. 25, 2016 - How does space travel affect the spine? 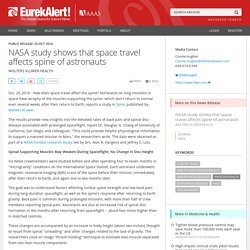 Astronauts on long missions in space have atrophy of the muscles supporting the spine--which don't return to normal even several weeks after their return to Earth, reports a study in Spine, published by Wolters Kluwer. The results provide new insights into the elevated rates of back pain and spinal disc disease associated with prolonged spaceflight, report Dr.

Douglas G. Chang of University of California, San Diego, and colleagues. "This could provide helpful physiological information to support a manned mission to Mars," the researchers write. Spinal Supporting Muscles May Weaken During Spaceflight; No Change in Disc Height Six NASA crewmembers were studied before and after spending four to seven months in "microgravity" conditions on the International Space Station. How Bad is the Radiation on Mars? - Universe Today. Human exploration of Mars has been ramping up in the past few decades. 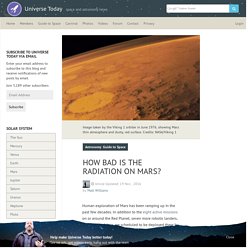 In addition to the eight active missions on or around the Red Planet, seven more robotic landers, rovers and orbiters are scheduled to be deployed there by the end of the decade. And by the 2030s and after, several space agencies are planning to mount crewed missions to the surface as well. On top of that, there are even plenty of volunteers who are prepared to make a one-way journey to Mars, and people advocating that we turn it into a second home. All of these proposals have focused attention on the peculiar hazards that come with sending human beings to Mars. Aside from its cold, dry environment, lack of air, and huge sandstorms, there’s also the matter of its radiation. Causes: Businessinsider. Imagineering on Mars - Making Heat on Mars(Imagineering E-Zine)