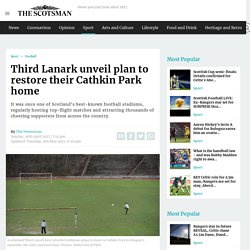 Sunday, 16th April 2017, 7:14 pm Updated But Cathkin Park, in the southside of Glasgow, was left to rot after its home club, Third Lanark, went bust in 1967. Its grandstands were eventually dismantled and the ground was bought by the local authority, who retained the pitch for public use. Sign up to our daily newsletter The i newsletter cut through the noise Now ambitious plans have been unveiled that could see a reformed Third Lanark rebuild their spiritual home as a modern footballing centre. A consortium are in talks over funding for the redevelopment of Cathkin Park, which would see an all-weather pitch, changing facilities and floodlights installed. 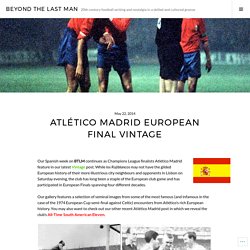 While los Rojiblancos may not have the gilded European history of their more illustrious city neighbours and opponents in Lisbon on Saturday evening, the club has long been a staple of the European club game and has participated in European Finals spanning four different decades. Our gallery features a selection of seminal images from some of the most famous (and infamous in the case of the 1974 European Cup semi-final against Celtic) encounters from Atlético’s rich European history. You may also want to check out our other recent Atlético Madrid post in which we reveal the club’s All-Time South American Eleven. 1959 European Cup semi-final, Pazos (Atl Madrid) Kopa (Real Madrid) Manchester United change their club badge... how has your Premier League club's crest evolved? By Adam Shergold for MailOnline and Charlie Skillen for MailOnline Published: 15:05 BST, 22 July 2013 | Updated: 16:46 BST, 22 July 2013 Manchester United's chief executive Ed Woodward earned some brownie points with the Old Trafford fans this week when he announced the words 'Football Club' would be returning to their famous crest. 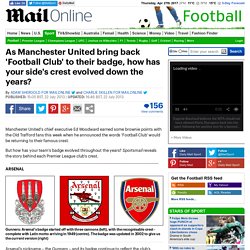 But how has your team's badge evolved throughout the years? Sportsmail reveals the story behind each Premier League club's crest. Bukta. Votre Vie Entière est Traçable sur Internet - Reportage HD (2017) 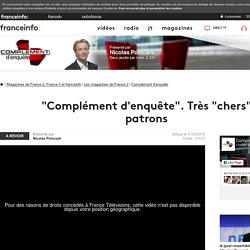 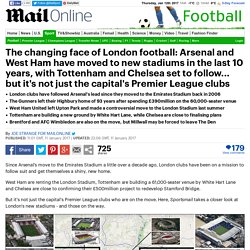 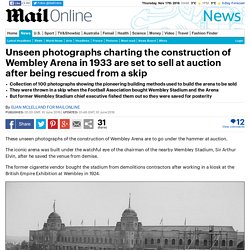 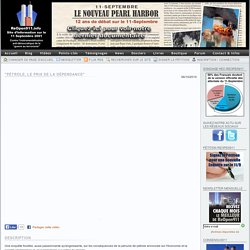 Archibald leitch : Livres anglais et étrangers. Played in Britain - Authors - Simon Inglis (other books) Simon Inglis was the first writer to make a complete study of the architecture and landscapes of British football. 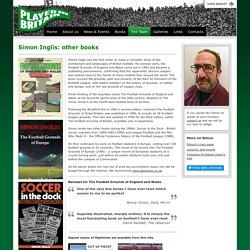 His seminal work, the Football Grounds of England and Wales came out in 1983 and became a publishing phenomenon, confirming that this apparently obscure subject was indeed close to the hearts of many football fans around the world. The book covered the grounds, past and present, of the then 92 members of the Football League, with added chapters on the history of grounds, on safety and design, and on the lost grounds of League clubs. Frank Keating of the Guardian chose The Football Grounds of England and Wales as his favourite sports book of the 20th century.

10 BEST NEW STADIUMS OF 2012 – Stadiafile. Here Stadiafile presents our rundown of the year’s 10 best new stadiums…because that’s what we do at the end of the year… and we look ahead to what’s in store in 2013, which will be the Year of the Brazilian Stadium. 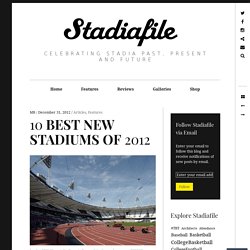 This was an exciting year for Stadiafile, with the birth of our blog project marking a big year for stadiums worldwide. The London Olympics and the Euro Cup in Poland and Ukraine brought with them a slew of new stadiums, while a number of significant new venues also opened in the US, Europe and Latin America. 1. 2012 Summer Olympics. London, UK Our global sports calendars now function on two-year cycles with the Olympics, Euro and World Cups coming every even year, bringing the planet a host of new sports venues. The questionable foresight of building so many sports facilities for a temporary event has been well documented and for this reason the venues for the 2012 Summer Games in London were most remarkable. ARCHIBALD LEITCH – Stadiafile. Before there was Populous, Ellerbe Becket/AECOM and Heery International, there was Archibald Leitch. 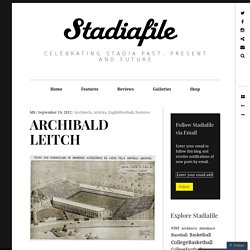 The self-described “Consulting Engineer and Factory Architect”, Leitch began his career designing factory buildings in his hometown of Glasgow, Scotland. He would take the industrial, bare-bones aesthetic of factory construction on to design 29 stadiums in Scotland and England and had his hand in as many as 51 over a career spanning forty years from 1899-1939. The prolific, Glasgow-born, Scottish engineer designed the original Stamford Bridge (Chelsea), Old Trafford (Manchester United) and White Hart Lane (Tottenham) and his designs for Ibrox (Glasgow Rangers), Craven Cottage (Fulham) and Goodison Park (Everton) are largely still standing today. As illustrated in Simon Inglis’ wonderful book, Engineering Archie: Archibald Leitch – Football Ground Designer, Leitch’s contributions to football ground design are still being felt today – in short, he set the standard.

A National Front sympathiser was the best player, team members rowed in public and their own fans pelted them with flour - Great Britain's run to the 1978 Davis Cup final was anything but dull. This week Andy Murray leads his nation's attempt to win the sport's premier team competition for the first time since 1936. The only occasion they have come close in the intervening 79 years was at a time of turmoil in Britain, with widespread public sector strikes and the Labour government of James Callaghan close to collapse. A team of disparate and occasionally volatile characters - the brilliant but divisive Buster Mottram, chalk-and-cheese brothers John and David Lloyd, and veteran doubles specialist Mark Cox - came together to win five ties before losing to a John McEnroe-inspired United States.

The Lloyd brothers and team captain Paul Hutchins reveal the extraordinary highs and lows of that memorable campaign 37 years ago, which began with their best player exiled from the squad. Ces-scènes-de-cinéma-qui-me-hanteront-jusqu'à-la-fin-de-mes-jours - Liste de 124 films. The 8 toughest races in the world. Waking up at 6am each morning becomes progressively harder, as does the day's run/trudge across miles of energy sapping sand dunes and blister inducing rocky hamada. The runners' only reprieve is the water bottles handed out at checkpoints.