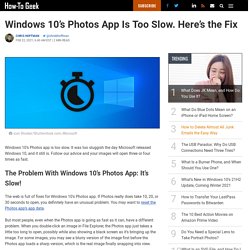 It was too sluggish the day Microsoft released Windows 10, and it still is. Follow our advice and your images will open three or four times as fast. The Problem With Windows 10’s Photos App: It’s Slow! The web is full of fixes for Windows 10’s Photos app. Windows 10 update introduces a new copy-and-paste feature. An upcoming Windows 10 feature update is set to improve ‘Cloud Clipboard’ with support for a few features, including ‘paste as plain text’, emojis, GIFs and more. 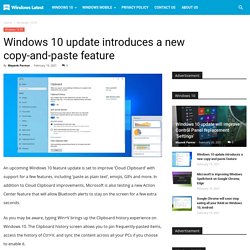 In addition to Cloud Clipboard improvements, Microsoft is also testing a new Action Center feature that will allow Bluetooth alerts to stay on the screen for a few extra seconds. As you may be aware, typing Win+V brings up the Clipboard history experience on Windows 10. The Clipboard history screen allows you to pin frequently-pasted items, access the history of Ctrl+V, and sync the content across all your PCs if you choose to enable it. Microsoft is now testing a new update for Windows Clipboard history that will allow you to access the “Paste as plain text” option alongside the existing pin and delete buttons. By default, Windows 10 allows you to paste the text with the “Ctrl + V” keyboard shortcut, which includes the original formatting.

Chrome has a secret scrollable tabstrip option – here's how to enable it. You're running Chrome and you've got your number of open tabs nicely in check, right? 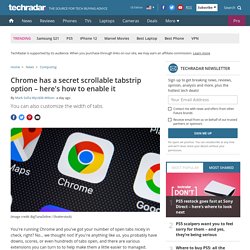 No... we thought not! If you're anything like us, you probably have downs, scores, or even hundreds of tabs open, and there are various extensions you can turn to to help make them a little easier to managed. But Google is also working on bringing new tab options to the browser, and one of its current experiments sees Chrome borrowing an idea from Firefox. By enabling a hidden flag, you can make the tab strip scrollable – and there's more to explore too. The First Things to Set Up in Windows 10. How to get rid of all the junk in your Windows 10 Start menu. Windows 10 users: Try these 3 new features today. The latest Windows 10 ($158 at Amazon) October 2020 Update began rolling out to desktops, laptops and two-in-ones in late October, and is likely available for you to download now. 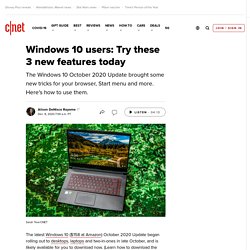 (Learn how to download the Windows 10 October 2020 Update here. If you still haven't upgraded from Windows 7 ($26 at Amazon), you may be able to use this trick to download Windows 10 free, too.) Once you've updated your device, you'll find a few important new features that will help you get the most out of the new operating system. Upgrading as soon as the update is available to you will make your computing life easier and more secure.

And at this point, as many of us are spending more time at home on our computers for work or play, every little thing that can make your experience better is a win in our book. Here are three of the best new features in the Windows 10 October 2020 Update (also known as version 20H2), and how to use them. Windows 10: Best 3 new features, and how to use them. The Windows 10 ($145 at Amazon) October 2020 Update has finally arrived, and will be slowly rolling out to desktops, laptops and two-in-ones over the coming weeks. 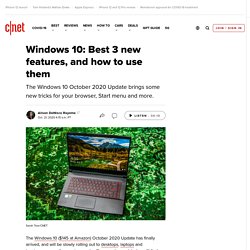 Once you've updated, you'll find a few important new features that will help you get the most out of your device. Windows lifecycle fact sheet - Windows Help. Home, Enterprise, Education, Pro, Pro Education, and Pro for Workstations editions Windows 10 Semi-Annual Channel is governed by the Modern Lifecycle Policy (as of January 25, 2018). 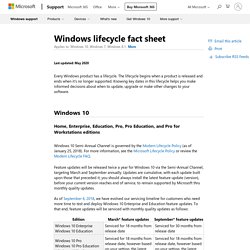 For more information, see the Microsoft Lifecycle Policy or review the Modern Lifecycle FAQ. Feature updates will be released twice a year for Windows 10 via the Semi-Annual Channel, targeting March and September annually. Updates are cumulative, with each update built upon those that preceded it; you should always install the latest feature update (version), before your current version reaches end of service, to remain supported by Microsoft thru monthly quality updates. As of September 6, 2018, we have evolved our servicing timeline for customers who need more time to test and deploy Windows 10 Enterprise and Education feature updates. . * Feature updates will be released twice annually with a target of March and September.

Windows 10 2004 update block confusion: 'Your PC settings aren't supported' Various Windows 10 PCs have been blocked from installing the Windows 10 version 2004 due to incompatible drivers, but now users are reporting their upgrade is being blocked because of their current PC settings. 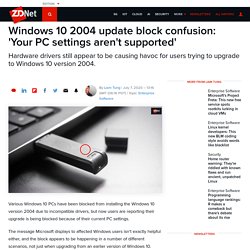 The message Microsoft displays to affected Windows users isn't exactly helpful either, and the block appears to be happening in a number of different scenarios, not just when upgrading from an earlier version of Windows 10. One Reddit user received the message while attempting to switch from a Home edition of Windows 10 version 2004 to the Pro edition. Microsoft Issues Windows 10 Update Warning. Windows 10 users, yes it has been a rocky spell, but you need to be on high alert yet again. 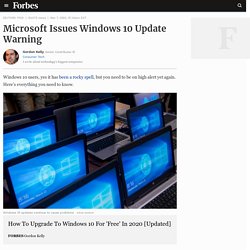 Here’s everything you need to know. Forbes Gordon Kelly Picked up by both BleepingComputer and Windows Latest, the early problems with Microsoft’s new KB4535996 Windows 10 update are now spiralling out of control. Here are the main issues you need to be aware of: Boot Problems And Crashes The former appears to be widespread among users who have installed KB4535996, with significant delays in PCs starting after installing the update and occasionally showing a disconcerting black screen partway through the elongated boot process.

That said, if you have this issue you are lucky because for others their PCs will not boot at all: “I just had this update on my PC and now it will not boot. Blue Screen Of Death The infamous BSOD is also hitting users with KB4535996 installed with the blue screen appearing as Windows loads the login screen. “Seeing this issue with about 200 machines. Topic: Controlling When Windows 10 Updates @ AskWoody. 12windows tips zd. 12windows tips zd. After Windows 10 upgrade, do these seven things immediately. Full version upgrades to a Windows PC used to be rare: Most people only had to deal with an upgrade once every three to five years, and then typically as part of the process of buying a new PC. 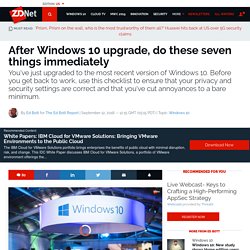 Now, in the "Windows as a service" era, you can expect a feature update (essentially a full version upgrade) roughly every six months. If you're setting up a new PC or doing a clean install of Windows 10 on older hardware, follow the instructions in How to set up a new Windows 10 PC perfectly in one hour or less. Also: Windows 10 updates are about to get smaller and less painful TechRepublic For upgrades, the process is considerably simpler. After about an hour (more or less, depending on the underlying hardware), you should be back at work, with most apps and settings migrated successfully.

In either case, clean install or upgrade, use this checklist to make sure you've covered some important bases that aren't part of Windows Setup. 1. You need a USB flash drive. 2. Both types of accounts are free. How to set up a Windows 10 computer: 5 essential steps. Getting a new PC is exciting, but you should follow these setup steps before using a Windows 10 machine. 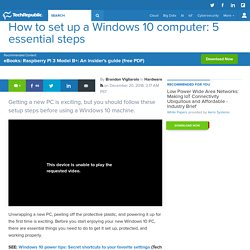 You can see the results in the screenshot here, where the default arrangement is on the left and All Folders view is on the right. Protect your privacy in File Explorer more ed bott. FAQ: How to install, reinstall, upgrade and activate Windows 10. [Latest update: January 21, 2017. This article has gone through multiple revisions since its first publication in late 2014. This content is based on the most recent public release of Windows 10, version 1607.] This article covers the most common scenarios you're likely to encounter when installing, reinstalling, and activating Windows 10. ?tag=nl. [Most recent updates: January 18, 2016] Windows 10 is available as a free upgrade to every qualified device running retail or OEM versions of Windows 7 or Windows 8.1.

(Enterprise editions do not qualify.) The free upgrade offer began with the official release of Windows 10 on July 29, 2015, and lasts for one year from that date. ?tag=nl. How to Hide the "Get Windows 10" Icon from Your Taskbar. How to reserve your free copy of Windows 10 - CNET. A new notification prompts Windows 7 and 8.1 users to reserve an upgrade to the upcoming OS, due to debut July 29. Microsoft is now pushing Windows 10 via a notice suggesting you reserve a copy. On Monday, the software giant announced that Windows 10 will officially roll out July 29.

That means it will be available on any PCs you purchase as of that date -- and as a free upgrade to your existing Windows 7 or 8.1 tablet or PC. Microsoft has a lot riding on Windows 10. The new OS has the task of erasing the bad experiences people had with the touchscreen-focused Windows 8, which ultimately failed to catch fire among PC users. Untitled. Unless you’ve been on another planet, you’ve heard about Windows 10. If you are even a little bit of a techy in your local genealogy world, you are being asked questions.

And if you aren’t a techy, you KNOW you have questions. Upgrading to Windows 10? How to clean install Windows 10. Windows 10 has been available for a couple of days, and 14 million machines have already been upgraded. Windows 10 Reviewed: Microsoft Returns to Sanity. Best Hotel Deals in Niagara Falls But the Windows 8 tiles are still here, attached to the right side of the menu: As before, these are live tiles; many of them display useful information without your even having to click, like the weather, news, stocks, and your next calendar appointment. You can customize any of these Start-menu sections. Windows 10 silently uses your bandwidth to send updates to others. I like Windows 10 but I'm going back to Windows 8.1.

Windows 10 may share your Wi-Fi password with Facebook. If you're taking up Microsoft on its offer of a free upgrade to Windows 10, you should know that the new operating system has a feature, called Wi-Fi Sense, that automatically shares your Wi-Fi passwords with others. When Wi-Fi Sense is enabled, anyone you have in your Skype, Outlook or Hotmail contacts lists — and any of your Facebook friends — can be granted access to your Wi-Fi network as long as they're within range.

Microsoft added this feature to save users time and hassle, but as independent security blogger Brian Krebs put it, some security experts see it as "a disaster waiting to happen. " Cheat sheet! Microsoft releases printable Windows 10 key shortcut list. Windows 10 Tip: How to change the default search engine in Edge. No Sound in Windows 10? Here's How to Quickly Fix Digital Deafness. A Reader Asks: