8th Fire - TV - Indigenous in the City. Sunday January 13 at 11 am on CBC-TV More than half of Canada's Aboriginal population now lives in cities. 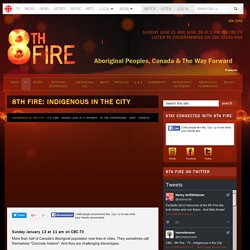 They sometimes call themselves "Concrete Indians". And they are challenging stereotypes. In the opening episode of the four-part series 8TH Fire, host Wab Kinew, from the Ojibways of Onigaming First Nation in Northern Ontario, and now a Winnipeg-based TV journalist, invites us to come "meet the neighbours". It's about time, since many Canadians say they have never met an Aboriginal person. This vibrant kaleidoscopic hour, introduces a diverse cast of Indigenous characters living in the cities. "Winnipeg's Most" are three rising-star rappers, trying to move past their own struggles by using their music to charm kids away from gangster life. Kennedy_Hill. Manitoba's Sayisi Dene speak out about surviving forced move - Manitoba. Son Of Mine - Oodgeroo Noonuccal - Poem.

How to eat a whale: A Barrow family describes bowhead preparation. BARROW -- For 17-year-old Michelle Kaleak, spring whaling season is the best time of year. 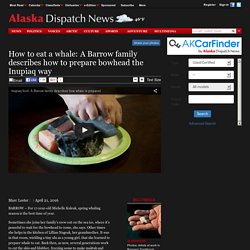 Sometimes she joins her family’s crew out on the sea ice, where it’s peaceful to wait for the bowhead to come, she says. Other times she helps in the kitchen of Lillian Nageak, her grandmother. It was in that room, wielding a tiny ulu as a young girl, that she learned to prepare whale to eat. Back then, as now, several generations work to cut the skin and blubber, freezing some to make maktak and boiling some to make uunalik, and dividing it all into shares to distribute to the community. The Stolen Generations’ Testimonies. Honoring Native Grandmas: Katie John Day Moves Closer to Reality. In the spring of 1953, Fred John Jr. and his kid sister Nancy arrived home after spending two years at the Wrangell Institute Boarding School in Wrangell, Alaska. 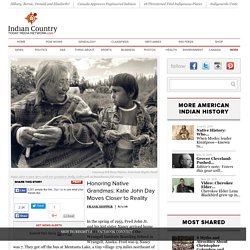 Fred was 9, Nancy was 7. They got off the bus at Mentasta Lake, a tiny village 279 miles northeast of Anchorage. Their mother, Katie John, the Ahtna Athabascan matriarch who would later become an Alaska Native leader fighting for subsistence rights, sat on a blanket nearby waiting for them. Fred and his sister stood by the bus door looking at their mother, not knowing what to do. Fred remembers that moment: “We didn’t know if our parents still loved us or not. Finally, their mother held her arms out and they ran between them. For the previous two years no one had hugged them or shown them any kind of affection at all. And the worst part was, they didn’t know why. “We started building walls around us,” Fred remembers. Fred John Jr. and his younger sister Nancy in 1956, ages 13 and 11.

Overview - Wilton Littlechild - Speak Truth to Power Canada. How to use this lesson Global and Canadian Defenders for human rights have changed societal conditions and provide inspiration for students. 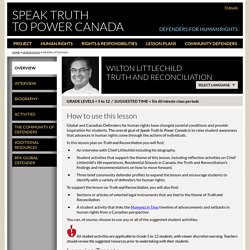 The overall goal of Speak Truth to Power Canada is to raise student awareness that advances in human rights come through the actions of individuals. Just 20 years ago Indigenous suicide rates were at the same rate for all Australians. As I travelled to Darwin I received a message on my phone. 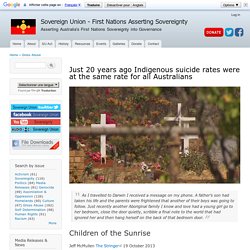 A father’s son had taken his life and the parents were frightened that another of their boys was going to follow. Just recently another Aboriginal family I know and love had a young girl go to her bedroom, close the door quietly, scribble a final note to the world that had ignored her and then hang herself on the back of that bedroom door. Children of the Sunrise Jeff McMullen The Stringer (link is external) 19 October 2013 Look at the future through the eyes of an Aboriginal or Torres Strait Islander child in any family, urban, rural or in a remote community.

Reconciliation Week resources. National Reconciliation Week, which celebrates and builds on the relationships between Aboriginal and Torres Strait Islander peoples and other Australians, is held annually between 27 May and 3 June. 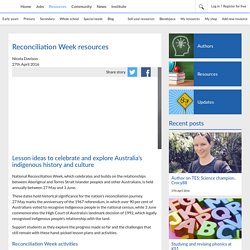 These dates hold historical significance for the nation’s reconciliation journey. 27 May marks the anniversary of the 1967 referendum, in which over 90 per cent of Australians voted to recognise indigenous people in the national census, while 3 June commemorates the High Court of Australia’s landmark decision of 1992, which legally recognised indigenous people’s relationship with the land. Support students as they explore the progress made so far and the challenges that still remain with these hand-picked lesson plans and activities. Reconciliation Week activities Learners can demonstrate their understanding in this timeline activity, in which they are tasked with discovering and outlining the significance of the key events before and after the 1967 referendum. Generosity of Spirit, Myths and Folktales: North America. Learning to Give, Philanthropy education resources that teach giving and civic engagement Home / Resources / Generosity of Spirit, Myths and Folktales / By Geography: North America Generosity of Spirit Myths and Folktales By Geography Africa | Asia | Australia | Europe | North America | South America Folktales are full of rich, cultural detail. 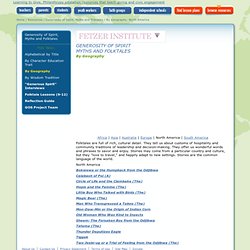