About RTL-SDR. What is RTL-SDR? 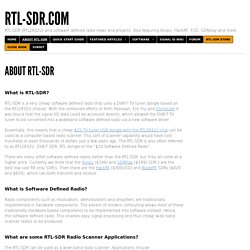 RTL-SDR is a very cheap software defined radio that uses a DVB-T TV tuner dongle based on the RTL2832U chipset. With the combined efforts of Antti Palosaari, Eric Fry and Osmocom it was found that the signal I/Q data could be accessed directly, which allowed the DVB-T TV tuner to be converted into a wideband software defined radio via a new software driver. Essentially, this means that a cheap $20 TV tuner USB dongle with the RTL2832U chip can be used as a computer based radio scanner. This sort of scanner capability would have cost hundreds or even thousands of dollars just a few years ago. The RTL-SDR is also often referred to as RTL2832U, DVB-T SDR, RTL dongle or the “$20 Software Defined Radio”. There are many other software defined radios better than the RTL-SDR, but they all come at a higher price. What is Software Defined Radio? Radio components such as modulators, demodulators and amplifiers are traditionally implemented in hardware components. Shrunk down an Arduino to the size of a finger-tip! by Open Source RF.

RFduino: A finger-tip sized, Arduino compatible, wireless enabled microcontroller, low cost enough to leave in all of your projects! 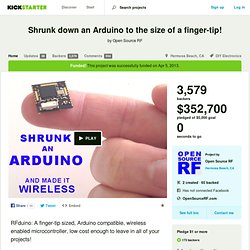 The RFduino has Bluetooth 4.0 Low Energy built-in, which enables it to wirelessly talk to any smartphone that has Bluetooth 4.0. Currently we have several open source apps built for the iPhone which were used in our demos. Open source Android apps are next. The RFduino has a Nordic 32 bit ARM Cortex-M0 processor, so it has more power then the UNO, however it still runs the same, simple Arduino code the UNO runs, so there is no need to learn any new programming language or environment. Your standard Arduino sketches run on the RFduino. The RFduino GPIO lines all support, Digital IO, Analog ADC, SPI, I2C, UART and PWM. The RFduino is similar to the Arduino UNO or DUE, except the RFduino is a fraction of the cost and size, in addition has wireless smartphone connectivity built-in! Micro Python: Python for microcontrollers by Damien George. The Micro Python project has been Kick-started! 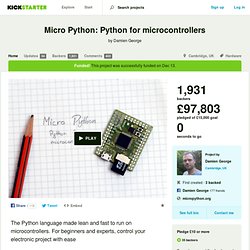 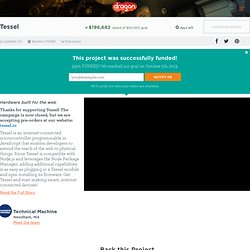 Tessel is an open-source microcontroller that is programmable in JavaScript and compatible with Node.js. We founded Technical Machine to make hardware development as fast and flexible as developing for the web. Tessel is the first step in that mission. Tessel is optimized for the creation of new experiences and internet-connected devices. That’s why Tessel features built in WiFi support and “plug and play” modules that can be installed with one line to the Node package manager (npm). If our campaign reaches its goal, we’ll begin building out Tessel's ecosystem with processes to take a Tesselation from prototype to a beta-testable device, and first-party services for aggregating usage data, firmware deployment and management, and enterprise-class security. Developing for Tessel is just like web development: write your JavaScript code and deploy it with a simple push command – just like pushing to a server. Espruino - Home. Espruino: JavaScript for Things by Gordon Williams.

Want to write about Espruino? 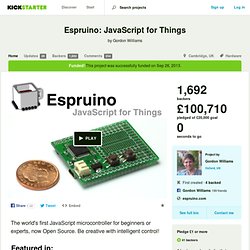 Check out this page Espruino is a small computer that anyone can use to control things around them. Its JavaScript interpreter gives you instant feedback so that you can experiment and develop whatever your level of experience. Even if you can’t program, you can still get started quickly with our Web-based graphical code editor! You don't need any compilation or 'flashing' step, or any software on the host computer. On successful completion of the KickStarter, we will release all software and hardware source files with an Open Source Licence, so Espruino can easily be ported to other platforms, such as Arduino, Carambola, Raspberry Pi, and even the Sony Smartwatch! Yes! Not only is it fun, but it's great for debugging your software (and hardware!)

You're not limited to just the interactive way of programming though - you can program whichever way you want to using the Web UI: We were looking for a language that: This is where Espruino shines.