Seven Beautiful Illustrations of Women Scientists You Should Know. When we talk about inspiring girls to study STEM, do we also consider how important it is to have role models of female scientists who have made great discoveries? 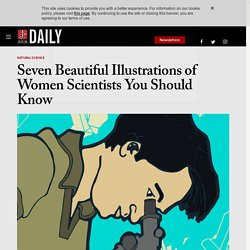 Well, we should. Here are seven scientists we love—all of whom have work in JSTOR! Shirley Ann Jackson American physicist Shirley Ann Jackson was the first African-American woman to earn a doctorate at MIT, and the second African-American woman to earn a doctorate in the U.S. Dr. Françoise Barré-Sinoussi Françoise Barré-Sinoussi is a French virologist who was fundamental in identifying the human immunodeficiency virus (HIV) as the cause of AIDS. Vera Cooper Rubin Vera Cooper Rubin, an American astronomer, made important discoveries about galaxy rotation rate, which provided evidence of the existence of dark matter. Dorothy Crowfoot Hodgkin Dorothy Crowfoot Hodgkin was a British chemist who determined the structure of penicillin in 1946, and the structure of vitamin B12, the most complex of all the vitamins, in 1956. E. E. By: E. Our Most Popular Scientists - Top 100.

AAI. Black Scientists and Inventors. Scientists, engineers, and inventors find the solutions to the world's problems. 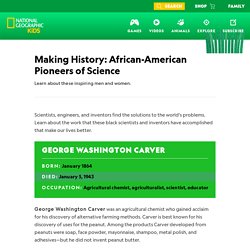 Learn about the work that these black scientists and inventors have accomplished that make our lives better. BORN: January 1864DIED: January 5, 1943OCCUPATION: Agricultural chemist, agriculturalist, scientist, educator George Washington Carver was an agricultural chemist who gained acclaim for his discovery of alternative farming methods. Carver is best known for his discovery of uses for the peanut. Among the products Carver developed from peanuts were soap, face powder, mayonnaise, shampoo, metal polish, and adhesives—but he did not invent peanut butter.

Born: September 20, 1910Died: November 10, 2008Occupation: NASA mathematician Known as a “human computer,” Dorothy Johnson Vaughan was part of a team that did mathematical calculations to help launch satellites—and later humans—into space. When she was first hired to work on the space program, Vaughan’s department was segregated, or separated, by race.

Andra Day - Stand Up For Something feat. Common.

Feature Focused. Black History Month Resources. Black History Month: Celebrating Blacks in Science, Promoting Diversity in STEM. Morningside Center for Teaching Social Responsibility. BLM Lesson Series Part 2: "All Lives Matter" versus "Black Lives Matter" To the Teacher: The lesson below is the second in a 3-lesson series in which we take a close look at the Black Lives Matter movement, why and how it came into being, and what it has evolved into. 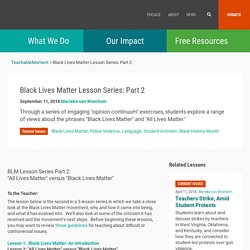 Lessons for Middle and High School People’s History Lessons from the Zinn Education Project Middle School BLM Mini-Lessons High School BLM Mini-Lessons BLM 13 Guiding Principles: Introductory Lesson Follow Up Activity for Youth Monday: Restorative Justice, Empathy and Loving engagement Promoting Social Imagination Through Interior Monologues [6th-12th]Empathy, or “social imagination,” allows students to connect to “the other” with whom, on the surface, they may appear to have little in common#LastWords [7th-12th]Students reflect on the last words of people killed by the police and read and respond to the poem 41 Bullets off Broadway by Willie Perdomo. 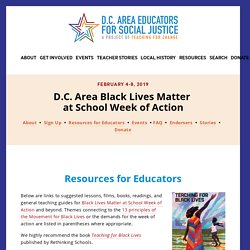