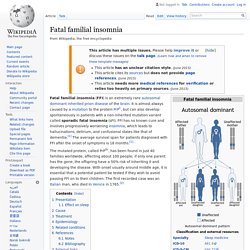 It is almost always caused by a mutation to the protein PrPC, but can also develop spontaneously in patients with a non-inherited mutation variant called sporadic fatal insomnia (sFI). FFI has no known cure and involves progressively worsening insomnia, which leads to hallucinations, delirium, and confusional states like that of dementia.[1] The average survival span for patients diagnosed with FFI after the onset of symptoms is 18 months.[1] The mutated protein, called PrPSc, has been found in just 40 families worldwide, affecting about 100 people; if only one parent has the gene, the offspring have a 50% risk of inheriting it and developing the disease.

With onset usually around middle age, it is essential that a potential patient be tested if they wish to avoid passing FFI on to their children. THE BRAIN FROM TOP TO BOTTOM. Vitamins. Coma. In medicine, a coma (from the Greek κῶμα koma, meaning "deep sleep") is a state of unconsciousness lasting more than six hours, in which a person: cannot be awakened; fails to respond normally to painful stimuli, light, or sound; lacks a normal sleep-wake cycle; and, does not initiate voluntary actions.[1] A person in a state of coma is described as being comatose. 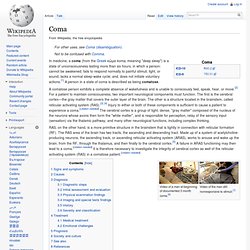 A comatose person exhibits a complete absence of wakefulness and is unable to consciously feel, speak, hear, or move.[2] For a patient to maintain consciousness, two important neurological components must function. The first is the cerebral cortex—the gray matter that covers the outer layer of the brain. Lobotomy. Lobotomy (Greek: λοβός – lobos: "lobe (of brain)"; τομή – tomē: "cut/slice") is a neurosurgical procedure, a form of psychosurgery, also known as a leukotomy or leucotomy (from the Greek λευκός – leukos: "clear/white" and tome). 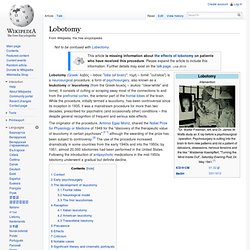 It consists of cutting or scraping away most of the connections to and from the prefrontal cortex, the anterior part of the frontal lobes of the brain. While the procedure, initially termed a leucotomy, has been controversial since its inception in 1935, it was a mainstream procedure for more than two decades, prescribed for psychiatric (and occasionally other) conditions – this despite general recognition of frequent and serious side-effects.

Context[edit] In the early 20th century, the number of patients residing in mental hospitals increased significantly[n 2] while little in the way of effective medical treatment was available. Infectious mononucleosis. Infectious mononucleosis (IM; also known as mono, glandular fever, Pfeiffer's disease, Filatov's disease,[1] and sometimes colloquially as the kissing disease (from its oral transmission) is an infectious, widespread viral disease caused by the Epstein–Barr virus (EBV), one type of herpes virus, against which over 90% of adults are likely to have acquired immunity by the age of 40.[2][3] Occasionally, the symptoms can recur at a later period.[2] Most people are exposed to the virus as children, when the disease produces no noticeable or only flu-like symptoms. 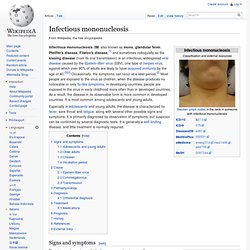 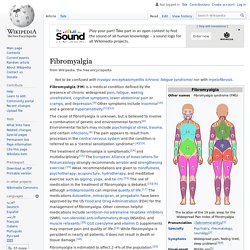 Recommendations often include getting enough sleep, exercising regularly, and eating a healthy diet.[4] Cognitive behavioral therapy may also be helpful.[3] The medications duloxetine, milnacipran, or pregabalin may be used.[4] Use of opioid pain medication is controversial with some stating their use is poorly supported by evidence[4][7] and others saying that weak opioids may be reasonable if other medications are not effective.[8] Dietary supplements also lack evidence to support their use.

While fibromyalgia can last a long time, it does not result in death or tissue damage.[4] Fibromyalgia is estimated to affect 2–8% of the population. Females are affected about twice as often as males. Rates appear similar in different areas of the world and among different cultures. Classification[edit] Differences in psychological and autonomic nervous system profiles among affected individuals may indicate the existence of fibromyalgia subtypes. Methamphetamine.

Methamphetamine[note 1] (pronunciation: /ˌmɛθæmˈfɛtəmiːn/; contracted from N-methyl-alpha-methylphenethylamine) is a neurotoxin and potent psychostimulant of the phenethylamine and amphetamine classes that is used to treat attention deficit hyperactivity disorder (ADHD) and obesity. Methamphetamine exists as two enantiomers, dextrorotary and levorotary. [note 2] Dextromethamphetamine is a stronger central nervous system (CNS) stimulant than levomethamphetamine; however, both are addictive and produce the same toxicity symptoms at high doses. Although rarely prescribed due to the potential risks, methamphetamine hydrochloride is approved by the United States Food and Drug Administration (USFDA) under the trade name Desoxyn. 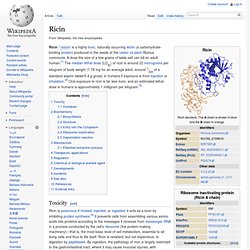 This leaves behind the spent crushed seeds, called variously the 'cake', 'oil cake', and 'press cake'. Mupirocin. Cerebral palsy. Cerebral palsy (CP) is a general term for a group of permanent, non-progressive movement disorders that cause physical disability,[1] mainly in the areas of body movement.[2] There may also be problems with sensation, depth perception, and communication ability. 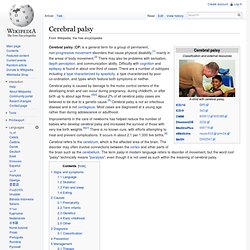 Difficulty with cognition and epilepsy is found in about one-third of cases. There are a number of subtypes including a type characterized by spasticity, a type characterized by poor co-ordination, and types which feature both symptoms or neither. Cerebral palsy is caused by damage to the motor control centers of the developing brain and can occur during pregnancy, during childbirth, or after birth up to about age three.[3][4] About 2% of all cerebral palsy cases are believed to be due to a genetic cause.[5] Cerebral palsy is not an infectious disease and is not contagious. Most cases are diagnosed at a young age rather than during adolescence or adulthood. Chemotherapy. Chemotherapy (often abbreviated to chemo and sometimes CTX or CTx) is the treatment of cancer with one or more cytotoxic anti-neoplastic drugs (chemotherapeutic agents) as part of a standardized regimen. 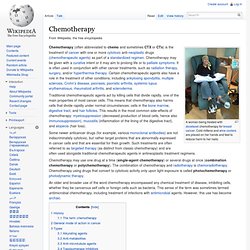 Chemotherapy may be given with a curative intent or it may aim to prolong life or to palliate symptoms.