Chain One, and Turn. This weekend I managed to do the last of my eeveelution patterns, glaceon. 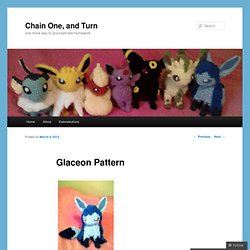 I still have umbreon to do eevelution wise, but Wolfdreamer already has an awesome pattern for him. Glaceon is a bit complicated due to all the diamonds. There’s a couple pieces where you’ll end off with collar in a diamond shape, then connect with another color and continue on. My best advice is to just go with it, even if it takes you a couple times to get it right, that’s how I got through it. AH! Creations. This one has been on my to do list for a long time now. 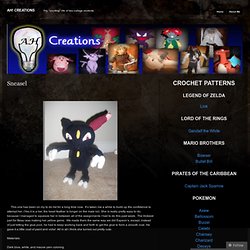 It’s taken me a while to build up the confidence to attempt her. Umbreon Plushie. Well, after many *many* requests, I finally did an Umbreon. AH! Creations. While looking for a new pokemon to crochet since I’m aggravated with another one I’m creating, I decided on Bellossom. 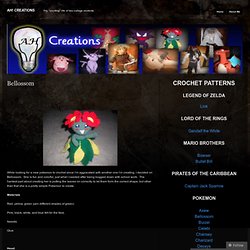 She is fun and colorful, just what I needed after being bogged down with school work. The hardest part about creating her is putting the leaves on correctly to let them form the correct shape, but other than that she is a pretty simple Pokemon to create. Materials Red, yellow, green yarn different shades of green) Pink, black, white, and blue felt for the face. Needle Glue Head.

Pichu Plush. July 08, 2009 This is the Pichu doll I just finished up for my youngest daughter who is probably the world's biggest Pichu fan. 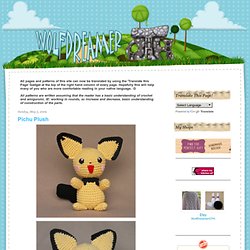 AH! Creations. Hello everyone, it’s been a while since I was able to write up a pattern for any amigurumis I make. 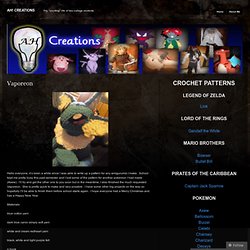 School kept me pretty busy this past semester and I lost some of the pattern for another pokemon I had made (Axew). I’ll try and get the other one to you soon but in the meantime, I also finished the much requested Vaporeon. She is pretty quick to make and very posable. I have some other big projects on the way so hopefully I’ll be able to finish them before school starts again. I hope everyone had a Merry Christmas and has a Happy New Year. Eevee Plush. I finally decided to tackle Eevee. 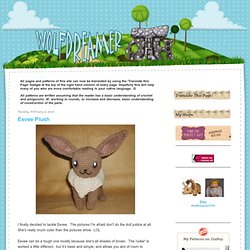 The pictures I'm afraid don't do the doll justice at all. She's really much cuter than the pictures show. LOL Eevee can be a tough one mostly because she's all shades of brown. The 'collar' is worked a little different, but it's basic and simple, and allows you alot of room to 'arrange' it however you like. AH! Creations. It’s been awhile since I’ve posted anything. 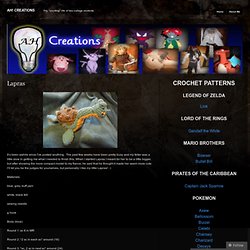 The past few weeks have been pretty busy and my felter was a little slow in getting me what I needed to finish this. When I started Lapras I meant for her to be a little bigger, but after showing the more compact model to my fiance, he said that he thought it made her seem more cute. I’ll let you be the judges for yourselves, but personally I like my little Lapras! : ) Materials: blue, grey, buff yarn white, black felt sewing needle g hook. Meowth Plushie. I had to do Meowth eventually. 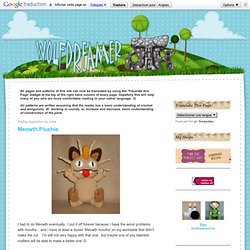 I put it off forever because I have the worst problems with mouths... and I have at least a dozen 'Meowth mouths' on my worktable that didn't make the cut. I'm still not very happy with that one, but maybe one of you talented crafters will be able to make a better one :D. I adore Meowth because he's scrappy and intelligent and just generally fun to watch in action. Sandshrew Pattern! I made a Sandshrew! 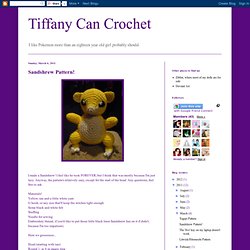 I feel like he took FOREVER, but I think that was mostly because I'm just lazy. Anyway, the pattern's relatively easy, except for the start of the head. Any questions, feel free to ask. Materials! Yellow, tan and a little white yarnG hook, or any size that'll keep the stitches tight enoughSome black and white feltStuffingNeedle for sewingEmbroidery thread, if you'd like to put those little black lines Sandshrew has on it (I didn't, because I'm too impatient) Here we gooooooo... 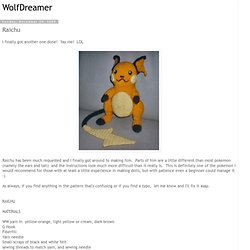 Yay me! LOL Raichu has been much requested and I finally got around to making him. Parts of him are a little different than most pokemon (namely the ears and tail) and the instructions look much more difficult than it really is. Pokemon Look-Alike Pikachu. Here is the pattern and pics for the Pikachu (pokemon) look-alike I made for my son. Pikachu-guy designed by Elizabeth Mareno 10/20/06 Materials: F hook, sport weight yarn (altho i did this with worsted), stuffing and needle. **Do not join rounds unless indicated** Top Feet: (Make 2)Row1: ch 2, 6 sc in 2nd ch from hookRow2: 2sc in each sc.Row3: Back Loop Only, sc in each aroundRow4: Both Loops, sc in each sc around.Finish off. Sew to front of body using picture as reference. Pokemon Lucario Look-Alike. Materials: Caron Simply Soft in White, Grey Heather, Blue Mint.