Pokémon Go guide: egg chart for hatching – all Pokemon inside 2km, 5km and 10km eggs. If you don’t like surprises, here’s what you might find inside your pokémon egg. 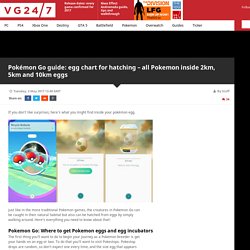 Just like in the more traditional Pokemon games, the creatures in Pokemon Go can be caught in their natural habitat but also can be hatched from eggs by simply walking around. Here’s everything you need to know about that! Pokemon Go: Where to get Pokemon eggs and egg incubators The first thing you’ll want to do to begin your journey as a Pokemon breeder is get your hands on an egg or two. To do that you’ll want to visit Pokestops. List of Gen 2 Pokemon (Johto Pokedex) - Pokemon GO Wiki Guide. None of the Legendary Pokemon from either generation have appeared, though it’s speculated they will be catchable during Events in the future. 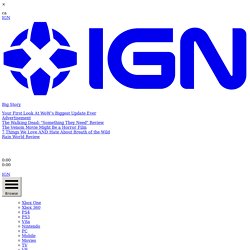 Delibird and Smeargle are also not available. Rocket Map. Pokémon GO Generation 1 and 2 Shiny Pokémon. Pokemon GO: New Research Says Spinning Differently Yields Different Results - Anime Blog. Pokémon Candy you should save for Generation 4. Are you excited that Generation 2 is finally out? 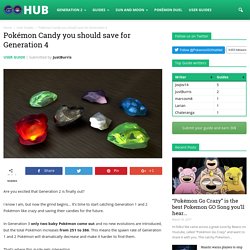 That’s where this guide gets interesting. In Generation 4, there are 17 new evolutions and 5 baby Pokémon that are based off Generation 1 and 2. The reason that I’m saying this is once Generation 4 comes out there will be more Pokémon to catch, but that’s not really a good thing. Imagine you need to catch one more Magnemite/Magneton to evolve your Magneton to Magnezone. 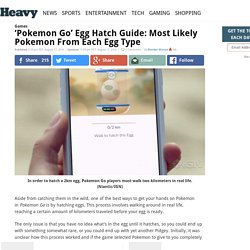 (Niantic/IGN) Aside from catching them in the wild, one of the best ways to get your hands on Pokemon in Pokemon Go is by hatching eggs. This process involves walking around in real life, reaching a certain amount of kilometers traveled before your egg is ready. The only issue is that you have no idea what’s in the egg until it hatches, so you could end up with something somewhat rare, or you could end up with yet another Pidgey. Initially, it was unclear how this process worked and if the game selected Pokemon to give to you completely randomly, but now we have some data that shows which Pokemon are the most and least common.

The information comes from Nether Fable, a website that gathered their data based on user feedback. When it comes to 5km eggs, Ponyta is the most common, although this species is still only present in about five percent of 5km eggs. 2km Eggs. Pokemon GO Egg Hatching Chart. Welcome to our Pokemon Go Egg Hatching Chart Guide, complete with the basics and more in-depth Strategies. 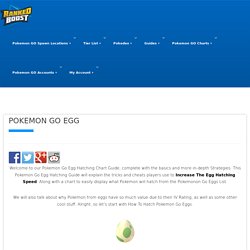 This Pokemon Go Egg Hatching Guide will explain the tricks and cheats players use to Increase The Egg Hatching Speed. Along with a chart to easily display what Pokemon will hatch from the Pokemonon Go Eggs List. We will also talk about why Pokemon from eggs have so much value due to their IV Rating, as well as some other cool stuff. List of Pokemon (Pokedex) - Pokemon GO Wiki Guide. This page contains information a list of all of the Pokemon found in Pokemon Go. 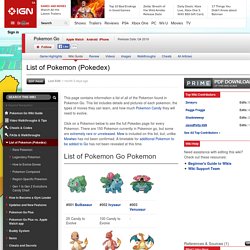 This list includes details and pictures of each pokemon, the types of moves they can learn, and how much Pokemon Candy they will need to evolve. Click on a Pokemon below to see the full Pokedex page for every Pokemon. ‘Pokemon Go’ Buddy Chart: Kilometer Requirements Guide. ‘Pokemon Go’ is available now for iOS and Android devices. 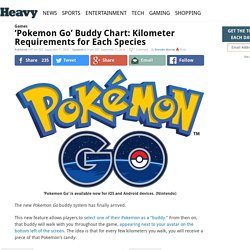 (Nintendo) The new Pokemon Go buddy system has finally arrived. This new feature allows players to select one of their Pokemon as a “buddy.” Raleigh Area Pokemon Nests/Pokestop Clusters. Nests - Pokemon Go Wiki. Recently, Niantic made changes to most Nests. 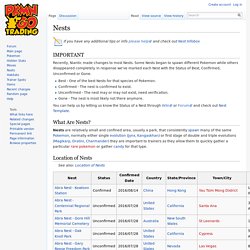 Some Nests began to spawn different Pokemon while others disappeared completely. In response we've marked each Nest with the Status of Best, Confirmed, Unconfirmed or Gone. Best - One of the best Nests for that species of Pokemon.Confirmed - The nest is confirmed to exist.Unconfirmed - The nest may or may not exist, need verification. Gone - The nest is most likely not there anymore. You can help us by letting us know the Status of a Nest through Wiki or Forum and check out Nest Template. What Are Nests? Nests are relatively small and confined area, usually a park, that consistently spawn many of the same Pokemon, normally either single evolution (Jynx, Kangaskhan) or first stage of double and triple evolutions (Magikarp, Dratini, Charmander) they are important to trainers as they allow them to quickly gather a particular rare pokemon or gather candy for that type.

Location of Nests See also: Location of Nests. Pokemon Go: How Much Combat Power it Needs to Evolve a 1000/2000+ CP Pokemon. Here's a list for each pokemon and its corresponding combat power, in order to guarantee a 1000+ CP or 2000+ CP FINAL evolution.

CP stands for combat power in Pokemon GO and it is useful for Pokemon that are used in combat, especially if you are planning to take down gyms. We already know the list of max obtainable CP but , it will definitely be an advantage if we can get an idea of how to obtain more than 1000 CP points (or even 2000+) for a Pokemon with its final evolution don't you think? This page aims to help trainers decide which Pokemon to evolve. E.g. Would your 300CP Dratini evolve into something stronger than your 550CP Dragonair? The table below shows you what CP a Pokemon is likely to evolve into a 1000+ CP / 2000 + CP, based on sample data and a bit of help from the formula (which calculates the exact CP of a Pokemon's evolution). Note: Not all Pokemon scale up in CP the same during evolution. How did I get these information you ask? PokemonGo Server Status. PokéVision. Pokecrew. Pokemon Go websites, apps for finding Pokestops, rares, gyms and more.

If you want to take your Pokemon Go gaming to the next level there are maps, apps and websites that can help. 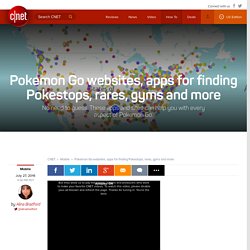 While some may consider using these extras cheating, they can help you find Pokemon faster, uncover the best PokeStops and more to help you become the PokeMaster you long to be without all the guesswork. Sites for finding Pokemon, maps and gyms Walking around looking for Pokemon can take a lot of time. You'll also need supplies and a little exercise for your Pokemon, so stops and gyms are essential. No need to wander, though. PokeVision is an online map that shows you where all the Pokemon in your area are in real time.

When it is working, the map only lets you scan your area every 30 seconds. Pokémon GO.