Evolve Eeeve into Epseon, Umbreon, Jolteon, Flareon or Vaporeon. Niantic Almost three weeks after Pokémon Go was released, its creators finally revealed the mysterious leaders of the game's teams and revealed hidden tips on how to evolve Eevee into its three respective forms. 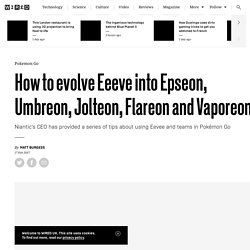 As part of the second-generation update, Eevee now has an additional two evolutions. Learn how to evolve Eevee into Epseon, Umbreon, Pyro, Sparky or Rainer below. How to choose which creature Eevee evolves into When you have enough Eevee candy, select which Eevee you want to evolve and click the pencil icon next to its name. Renaming Eevee Sparky will cause it to evolve into Jolteon Rainer = Vaporeon Pyro = Flareon Sakura = Epseon Tamao = Umbreon Why does Eevee evolve into different forms? Eevee – the Evolution Pokémon – is different to other Pokémon because rather than evolving through stages, it has "irregularly shaped genetic structure. " In fact, across the games and the TV series, Eevee evolves into eight different Pokémon. Team Instinct (yellow) Team Mystic (Blue) Team Valor (Red) 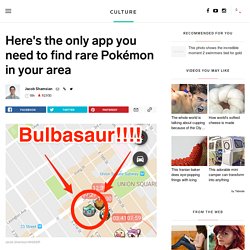 There's PokeNotify, which sends you push notifications when the Pokémon you want are near by. There's Pokevision, an online map that shows you nearby Pokémon, and there's Poké Radar, which is a crowdsourced Pokémon map. All of these apps have their issues. With PokeNotify, for example, you can't adjust the range at which the app will look for Pokémon, so sometimes it'll find one a kilometer away, which isn't helpful. Enter PokéMesh. I should warn you: Like all apps that require your "Pokémon Go" login information, PokéMesh can get your account banned from the game. Pokemon Go IV Calculator — Poke Assistant. Find out if your Pokemon can be the best Possible Combinations: 1, Perfection: Maximum : 84.4% Average: 84.4% Minimum : 84.4% Your possible IVs against the best and worst. 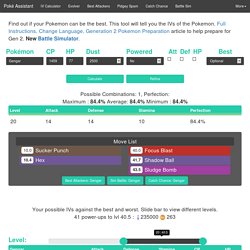 Slide bar to view different levels.41 power-ups to lvl 40.5 : This tool calculates your Pokemon's hidden Individual Values (IVs). It uses following information: Pokemon: The species of your Pokemon. You can check multiple boxes if your team leader says more than one stat is its best. Note, we're calling the stat "HP" because that's what Niantic chose to use in the leader text. Pokemon Go - Big News Update! Pokémon Go, explained. You may have heard stories of people hunting down Pokémon on their office desks, in hospital rooms, and even in bathrooms. 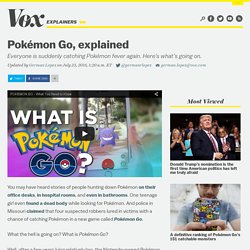 One teenage girl even found a dead body while looking for Pokémon. And police in Missouri claimed that four suspected robbers lured in victims with a chance of catching Pokémon in a new game called Pokémon Go. What the hell is going on? What is Pokémon Go? Well, after a few years lying relatively low, the Nintendo-owned Pokémon, which exploded in popularity in the late 1990s, is again taking the world by storm. In simple terms, Pokémon Go is a game that uses your phone’s GPS and clock to detect where and when you are in the game and make Pokémon "appear" around you (on your phone screen) so you can go and catch them.

So why are people seeking out virtual creatures while at work and as they go to the bathroom? Pokémon Go: 15 easy but effective tips to help you catch ‘em all. Unlike many mobile video games, the goal of Pokémon Go is pure and simple: to catch 'em all — with "all" being all the Pokémon. 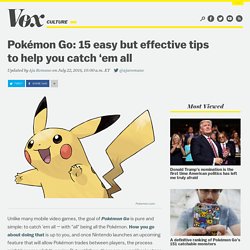 How you go about doing that is up to you, and once Nintendo launches an upcoming feature that will allow Pokémon trades between players, the process might become slightly easier. But until then, there are several basic steps that you need to implement in order to catch Pokémon: Locate the Pokémon.Shoot Poké Balls at the Pokémon.Repeat with more balls and more 'mon at new locations.Something something gyms and fighting. Tips for locating Pokémon The most basic way to find Pokémon near you is to wander the vicinity and use the locator map. Visit a nearby PokéStop. If you really want to find rare Pokémon, however, you’re going to have to travel.

Tip: Get more Poké Balls and find more Pokémon at gas stations. If you’re stuck and need more Poké Balls, one easy answer is to buy them. However, rural areas often don’t have a lot of PokéStops. One easy solution? Reddit. PokéVision — Find, locate and track Pokemon near you or anywhere in the world live & realtime in Pokemon GO! Every Pokemon in 'Pokemon GO': FULL LIST.

There are 151 Pokémon in "Pokémon GO. 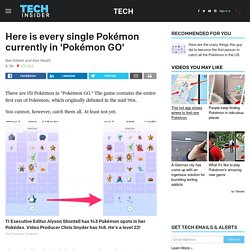 " The game contains the entire first run of Pokémon, which originally debuted in the mid-'90s. You cannot, however, catch them all. At least not yet. TI Executive Editor Alyson Shontell has 143 Pokémon spots in her Pokédex. Video Producer Chris Snyder has 148. That original list of 151 includes three "Legendary" Pokémon — Articuno, Zapdos, and Moltres — who definitely aren't in the game yet.