Nationalism and the conflict in the Balkans 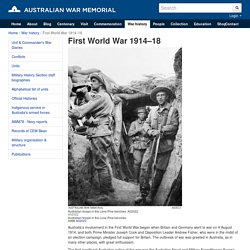 A02022 A02022 Australian troops in the Lone Pine trenches. AWM A02022 Australia’s involvement in the First World War began when Britain and Germany went to war on 4 August 1914, and both Prime Minister Joseph Cook and Opposition Leader Andrew Fisher, who were in the midst of an election campaign, pledged full support for Britain. The outbreak of war was greeted in Australia, as in many other places, with great enthusiasm. The first significant Australian action of the war was the Australian Naval and Military Expeditionary Force’s (ANMEF) landing on Rabaul on 11 September 1914.

On 25 April 1915 members of the Australian Imperial Force (AIF) landed on Gallipoli in Turkey with troops from New Zealand, Britain, and France. Throughout 1916 and 1917 losses on the Western Front were heavy and gains were small. First World War. War begins for Australia - World War I and Australia - Research guides at State Library of New South Wales. Australia was in the middle of a double-dissolution election when Britain declared war against Germany in August 1914. 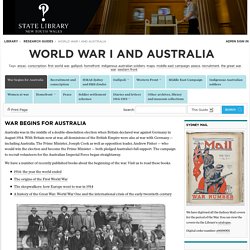 With Britain now at war, all dominions of the British Empire were also at war with Germany — including Australia. The Prime Minister, Joseph Cook as well as opposition leader, Andrew Fisher — who would win the election and become the Prime Minister — both pledged Australia’s full support. The campaign to recruit volunteers for the Australian Imperial Force began straightaway. We have a number of recently published books about the beginning of the war. Visit us to read these books. Some of the first Bega men to enlist during World War I, 1914, on Tathra Wharf ten miles from Bega. Digital order number: bcp_02079 References First World War 1914–1918. < [1 November 2013].The National Archives Australia's Prime Ministers. < [1 November 2013]. Get started - Australians in World War 1 - Research Guides at State Library of Victoria. This is a guide to finding records on Australian service personnel and their war activities. 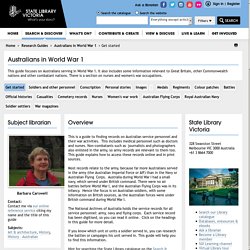 This includes medical personnel such as doctors and nurses. Non-combatants such as journalists and photographers also enlisted in the army, so army records are relevant to them too. This guide explains how to access these records online and in print sources. Most records relate to the army, because far more Australians served in the army (the Australian Imperial Force or AIF) than in the Navy or Australian Flying Corps. Australia during World War I had a small navy, which served under British command. 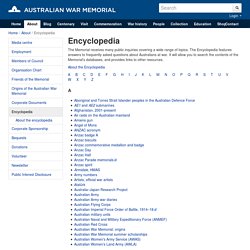 The Encyclopedia features answers to frequently asked questions about Australians at war. It will allow you to search the contents of the Memorial's databases, and provides links to other resources. About the Encyclopedia [top of page] Queen's Scarf awarded to Private A. Yarra, HMAS Z Special Unit (Operation Jaywick) Encyclopedia. Australians on the Western Front. The four siblings of the Malcolm family from Victoria. 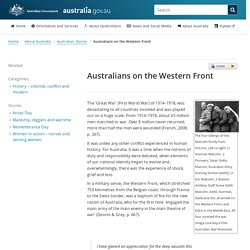 Left to right: Lt Norman Malcolm, 2 Pioneers; Sister Stella Malcom, Australian Army Nursing Service (AANS); Lt Eric Malcolm, 3 Division Artillery; Staff Nurse Edith Malcolm, AANS. Norman, Stella and Eric all served on the Western Front and Edith in the Middle East. All four survived the war. Image courtesy of the Australian War Memorial. The 'Great War' (First World War) of 1914–1918, was devastating to all countries involved and was played out on a huge scale. It was unlike any other conflict experienced in human history. In a military sense, the Western Front, which stretched 750 kilometres from the Belgian coast, through France to the Swiss border, was a baptism of fire for the new nation of Australia, who for the first time 'engaged the main army of the main enemy in the main theatre of war' (Dennis & Grey, p. 667).