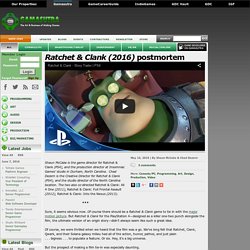 Chad Dezern is the Creative Director for Ratchet & Clank (PS4), and the studio director of the North Carolina location. The two also co-directed Ratchet & Clank: All 4 One (2011), Ratchet & Clank: Full Frontal Assault (2012), Ratchet & Clank: Into the Nexus (2013). Of course, we were thrilled when we heard that the film was a go. We’ve long felt that Ratchet, Clank, Qwark, and their Solana galaxy milieu had all of the action, humor, pathos, and just plain . . . bigness . . . to populate a feature. Or six. But the prospect of making a film tie-in was especially daunting. First, we had the legacy of the series to consider. "We needed to make a big game that blew away our previous efforts. Second, there was the prospect of syncing up with film production. And finally, there was our second oldest arch-nemesis, time itself*. Okay. How A Small Studio's Chance At The Big Time Died At Microsoft's Doorstep.

I see this purely in consulting terms (I’m a consultant). 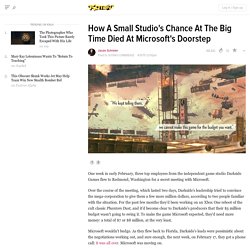 Microsoft here was the client, who outsourced their project to a consultant team (Darkside). They agreed on terms, budget, etc. and work started. Then, according to this, MSFT came back with a whole HELL of a lot of scope creep, while openly admitting they’d never change the budget. This happens ALL THE TIME to consulting companies. However, that does NOT make it okay on behalf of the client. Plus, the fact they were secretly getting other companies to do asset work and prep for things like surprise public reveals? In my world, this behavior would brand Microsoft as a distinctly terrible client to work for. To me, all the blame is squarely on Microsoft’s shoulders. Not to mention, how the hell did they expect to get a 30+ hour JRPG/multiplayer eSport hybrid on a $5 million budget these days? Howard Tsao's Blog - Guns of Icarus Online Post-Mortem - Epilogue: How Youtube, Steam, and Our Players Got Us This Far.

Guns of Icarus Online Post-Mortem - Epilogue: How Youtube, Steam, and Our Players Got Us This Far The following blog post, unless otherwise noted, was written by a member of Gamasutra’s community. 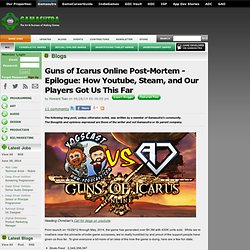 The thoughts and opinions expressed are those of the writer and not Gamasutra or its parent company. Heeding Christian's Call for blogs on youtube From launch on 10/29/12 through May, 2014, the game has generated over $4.3M with 430K units sold. Postmortem: Monolith Productions' Middle-earth: Shadow of Mordor. Michael de Plater is design director at WB Games studio Monolith Productions. 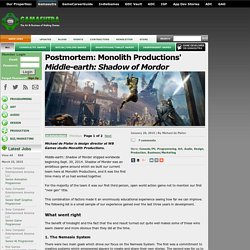 Middle-earth: Shadow of Mordor shipped worldwide beginning Sept. 30, 2014. Shadow of Mordor was an ambitious game around which we built our current team here at Monolith Productions, and it was the first time many of us had worked together. For the majority of the team it was our first third person, open world action game not to mention our first “new gen” title. This combination of factors made it an enormously educational experience seeing how far we can improve. Postmortem: Naughty Dog's Uncharted: Drake's Fortune. [Naughty Dog calls Uncharted their 'biggest and most complex' challenge yet, and shares successes and stumbles in this fascinating postmortem, originally printed in Game Developer magazine.] 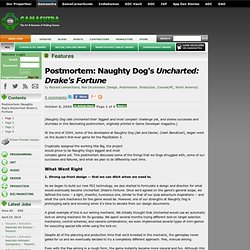 At the end of 2004, some of the developers at Naughty Dog (Jak and Daxter, Crash Bandicoot), began work on the studio's first-ever game for the PlayStation 3. Cryptically assigned the working title Big, the project would prove to be Naughty Dog's biggest and most complex game yet. This postmortem discusses some of the things that we Dogs struggled with, some of our successes and failures, and what we plan to do differently next time. 1. Strong up-front design -- that we can ditch when we need to. Grounded: The making of The Last of Us. The Confessional: It took two years to cancel Singularity, and ten months to fix it. Uncharted: Golden Abyss. Written primarily by writer and director John Garvin, the following incredibly detailed postmortem follows the ins and outs of Sony Bend's development of Uncharted: Golden Abyss, the PlayStation Vita launch title and premier game. 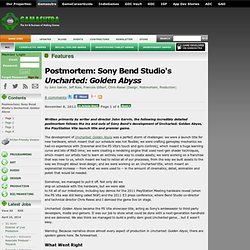 Somehow, we managed to pull it off. Not only did we ship on schedule with the hardware, but we were able to hit all of our milestones, including key demos for the 2011 PlayStation Meeting hardware reveal (when the PS Vita was still being called NGP) and the 2011 E3 press conference, where Bend Studio co-director and technical director Chris Reese and I demoed the game live on stage. Uncharted: Golden Abyss became the PS Vita showcase title, acting as Sony's ambassador to third party developers, media and gamers. It was our job to show what could be done with a next-generation handheld and we delivered. We also think we managed to build a pretty darn good Uncharted game... but it wasn't easy. 1.

(Note: Interestingly enough, "Story" is also in What Went Wrong. 2. Prince Of Persia: Sand Of Time. In 2001, a small team within Ubisoft’s Montreal studio led by producer Yannis Mallat began concept development on the project that would become Prince of Persia: The Sands of Time. 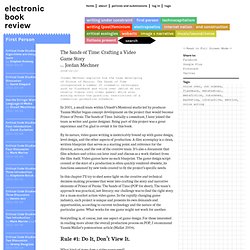 Initially a consultant, I later joined the team as writer and game designer. Being part of this project was a great experience and I’m glad to revisit it for this book. By its nature, video game writing is inextricably bound up with game design, level design, and the other aspects of production. A film screenplay is a clean, written blueprint that serves as a starting point and reference for the director, actors, and the rest of the creative team. It’s also a document that film scholars and critics can later read and discuss as a work distinct from the film itself. In this chapter I’ll try to shed some light on the creative and technical decision-making processes that went into crafting the story and narrative elements of Prince of Persia: The Sands of Time (POP for short). Rule #1: Do It, Don’t View It. 1.

Homefront. Spore. A few weeks ago and with little fanfare, Spore turned five-years-old. 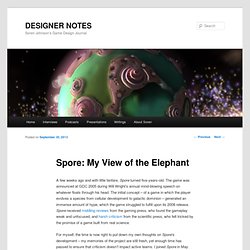 The game was announced at GDC 2005 during Will Wright’s annual mind-blowing speech on whatever floats through his head. The initial concept – of a game in which the player evolves a species from cellular development to galactic dominion – generated an immense amount of hype, which the game struggled to fulfill upon its 2008 release. Spore received middling reviews from the gaming press, who found the gameplay weak and unfocused, and harsh criticism from the scientific press, who felt tricked by the promise of a game built from real science. For myself, the time is now right to put down my own thoughts on Spore’s development – my memories of the project are still fresh, yet enough time has passed to ensure that criticism doesn’t impact active teams. 1 – Don’t be afraid to challenge the initial vision Ultimately, Spore was about two big ideas – powers of ten and procedural content.

World of Darkness - the inside story on the death of a game. For the video game industry, Monday 14 April 2014 was just another day of layoffs and wasted creative energy. 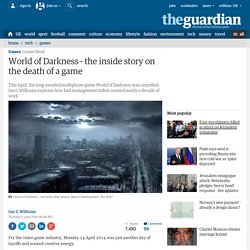 The massively multiplayer online game World of Darkness had spent nine years in development but was being cancelled, and its production studio CCP Atlanta slashed to a sliver of its former size. Fifty-six people lost their jobs. Insiders could barely muster a collective shrug.