Viking Women Were Badass Equals In Scandinavia A Millennium Ago. Viking society may have been a prime example of gender equality a millennium ago when women across much of Europe were not as highly valued as their male counterparts. 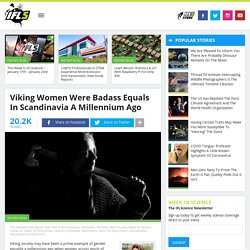 New research argues that this early viewpoint may have helped to contribute to the prosperity of Scandinavian nations today. Using archaeology to trace health and nutritional equality from Scandinavians living between the 8th and 11th centuries, scientists write in the journal Economics & Human Biology that men and women of the Viking era experienced “remarkable” equality, especially compared with other European regions that preferred boys.

“We hypothesized that if girls and women received less food and care than the male members of society, they would have more such damage,” said researcher Laura Maravall in a statement. “The extent to which values differ between men and women is therefore also a measure of equality within the population.” The researchers argue that equality may have been linked to the type of work done. Growing Up Without Siblings May Affect Your Brain's Development. A study in China claims that growing up without siblings can lead to a different brain structure than those who do. They found that only children tended to be more creative and less sociable. Previous studies have focused on the difference in behaviors, cognitive function, and personality traits between only children and those with siblings. After all, it’s common sense that those without siblings don’t have to share their parents’ attention, and so likely get more encouragement, but miss out on the early experience of sharing, or competing.

This new study, by the Southwest University in Chongqing, and published in Brain Imaging and Behavior, wanted to find out if the difference in behaviors had a neural basis. It also examined if different family environments actually affected children’s brain structural development. Dramaturgy (Dramaturgical Analysis) Erving Goffman - Interaction Ritual. Erving Goffman and the Performed Self. ATTN: Video - Don’t be so quick to call a woman “crazy.”

Stress and the Social Self: How Relationships Affect Our Immune System. Relationships, Adrienne Rich argued in her magnificent meditation on love, refine our truths. 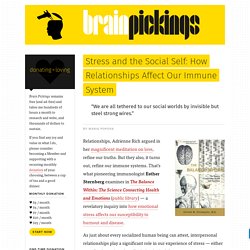 But they also, it turns out, refine our immune systems. That’s what pioneering immunologist Esther Sternberg examines in The Balance Within: The Science Connecting Health and Emotions (public library) — a revelatory inquiry into how emotional stress affects our susceptibility to burnout and disease. As just about every socialized human being can attest, interpersonal relationships play a significant role in our experience of stress — either contributing to it and or alleviating it.

And the way we connect — something psychologist Barbara Fredrickson has termed “positivity resonance” — is deeply patterned through our earliest experiences of bonding, which train our limbic pathways. Sternberg traces the cognitive origin of these formative patterns: Somewhere in our brains we carry a map of our relationships. The social world can activate the stress response, or it can tone it down. What It Really Means to Hold Space for Someone. While we supported Mom, we were, in turn, supported by a gifted palliative care nurse, Ann, who came every few days to care for Mom and to talk to us about what we could expect in the coming days. 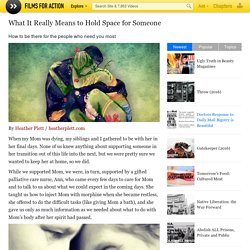 She taught us how to inject Mom with morphine when she became restless, she offered to do the difficult tasks (like giving Mom a bath), and she gave us only as much information as we needed about what to do with Mom’s body after her spirit had passed. The author with her mother “Take your time,” she said. “You don’t need to call the funeral home until you’re ready. Gather the people who will want to say their final farewells. Ann gave us an incredible gift in those final days. In the two years since then, I’ve often thought about Ann and the important role she played in our lives. The work that Ann did can be defined by a term that’s become common in some of the circles in which I work. Learning to hold space for others What does it mean to “hold space” for someone else? 1. 2. Wanted: Men Who Love. By bell hooks / filmsforaction.org Every female wants to be loved by a male. 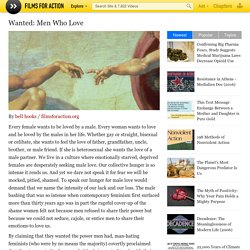 Every woman wants to love and be loved by the males in her life. Whether gay or straight, bisexual or celibate, she wants to feel the love of father, grandfather, uncle, brother, or male friend. If she is heterosexual she wants the love of a male partner. We live in a culture where emotionally starved, deprived females are desperately seeking male love. By claiming that they wanted the power men had, man-hating feminists (who were by no means the majority) covertly proclaimed that they too wanted to be rewarded for being out of touch with their feelings, for being unable to love. No one hungers for male love more than the little girl or boy who rightfully needs and seeks love from Dad. As a child I hungered for the love of my dad. In her moving memoir In the Country of Men Jan Waldron describes a similar longing. Contrasting the loving fathers we long for with the fathers we have, she expresses the hunger: Dad. After 75 Years Of Research, Harvard Study Found That Happiness Comes From One Thing…