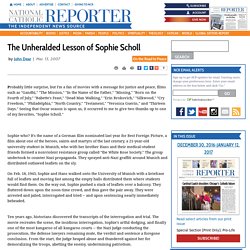 " Seeing that Oscar season is upon us, it occurred to me to give two thumbs up to one of my favorites, "Sophie Scholl. " Sophie who? 22nd February 1943: Sophie Scholl beheaded in Munich. The student resistance movement called the White Rose, active in Germany during the Third Reich. 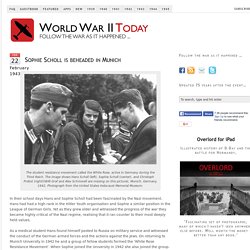 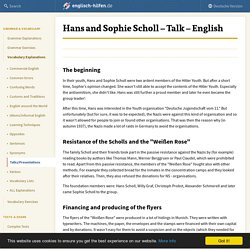 But after a short time, Sophie's opinion changed. She wasn't still able to accept the contents of the Hitler Youth. Especially the antisemitism, she didn't like. Sophie Scholl. Untitled. 1943: Sophie Scholl of the White Rose. February 22nd, 2009 Sarah Owocki On February 22, 1943, Sophie Magdalena Scholl, former student of philosophy and biology at the University of Munich in Germany, was executed by guillotine for her role in the White Rose nonviolent Nazi resistance group. 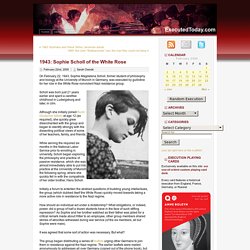 Scholl was born just 21 years earlier and spent a carefree childhood in Ludwigsburg and later, in Ulm. Although she initially joined Bund Deutscher Mädel at age 12 (as required), she quickly grew disenchanted with the group and began to identify strongly with the dissenting political views of some of her teachers, family, and friends. Louis Proyect: The Unrepentant Marxist. Sophie Scholl and the White Rose. They dared to challenge Nazi Germany from within, facing death for what they knew was right. 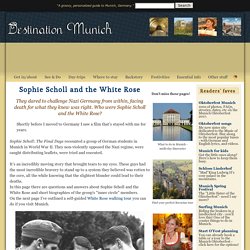 Who were Sophie Scholl and the White Rose? Shortly before I moved to Germany I saw a film that’s stayed with me for years. Sophie Scholl - One of the first Anti-Nazi Heroes! Sophie Scholl life was immortalized in a Hollywood movie “Sophie Scholl – The Final Days”. 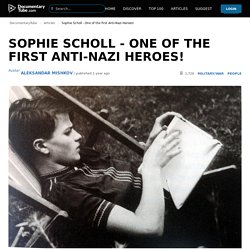 After more than 60 years of her death, Sophie finally got her due respect. Nowadays, she is celebrated as one of the most popular heroes in Germany. But 70 years ago, Sophie was seen as a traitor in Nazi Germany. Nowadays, she is admired and respected for her courageous actions, bold statements and her willingness to defy the Nazi regime. One of her biggest accomplishments is the foundation of the organization “The White Rose”. 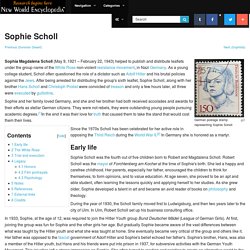 As a young college student, Scholl often questioned the role of a dictator such as Adolf Hitler and his brutal policies against the Jews. After being arrested for distributing the group's sixth leaflet, Sophie Scholl, along with her brother Hans Scholl and Christoph Probst were convicted of treason and only a few hours later, all three were executed by guillotine.

Sophie Scholl. Sophie Scholl, the daughter of Robert Scholl and Magdalena Scholl, was born in Forchtenberg on 9th May, 1921. 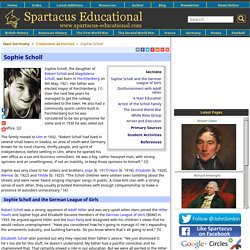 Her father was elected mayor of Forchtenberg. (1) Over the next few years he managed to get the railway extended to the town. He also had a community sports centre built in Forchtenberg but he was considered to be too progressive for some and in 1930 he was voted out of office. (2) Sophie Scholl Revolt & Resistance www.HolocaustResearchProject.org.

Sophie Scholl Sophia Scholl was born on May 9, 1921, the daughter of Robert Scholl, the mayor of Forchtenberg. 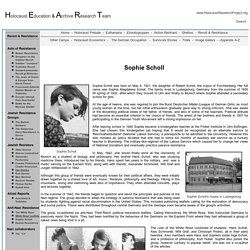 Her full name was Sophia Magdalena Scholl. The White Rose - A Lesson in Dissent. The date was February 22, 1943. 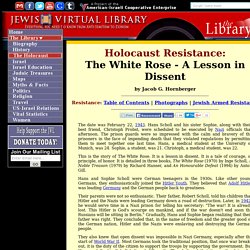 Hans Scholl and his sister Sophie, along with their best friend, Christoph Probst, were scheduled to be executed by Nazi officials that afternoon. The prison guards were so impressed with the calm and bravery of the prisoners in the face of impending death that they violated regulations by permitting them to meet together one last time. Sophie Scholl Biography. Sophia Scholl was a German student, who was active in the White Rose – a non-violent resistance group to Hitler and the Nazi party. In 1943, she was caught delivering anti-war propaganda and, with her brother Hans Scholl, was executed for high treason. She has become an important symbol of anti-Nazi resistance in Germany. Sophie Scholl and the White Rose « The International Raoul Wallenberg Foundation. At the age of 21, Sophie Scholl was executed by the People’s Court in Germany on Feb. 22, 1943, during the Holocaust, for her involvement in The White Rose, an organization that was secretly writing pamphlets calling for the end of the war and strongly denouncing the inhuman acts of the Nazis.

In May, 1942 German troops were on the battlefields of Russia and North Africa, while students at the University of Munich attended salons sharing their love of medicine, Theology, and philosophy and their aversion to the Nazi regime. Hans Scholl, Alexander Schmorell, and Sophie Scholl were at the center of this group of friends. Attending the same university were two medical students, Willi Graf and Jurgen Wittgenstein, who had served in a military hospital in 1939, with Hans, Sophie’s older brother. Along with Christoph Probst, a married soldier and father of three, they eventually joined The White Rose. Sophie Scholl, Nazi Resistance Hero. Sophie Scholl’s active opposition to the Nazis led to her execution. On what would have been her 90th birthday, we look back on her short life and how her story resonates in current day Germany.

Sophia Magdalena Scholl was born May 9, 1921, the fourth of sixth children. Sophie Scholl: The German Who Refused To Be A Nazi – The Wisdom Daily. May 09, 2016 Today is Sophie Scholl’s birthday. She would be 95 – an age she may have reached had she not been executed by the German People’s Court on May 22nd 1943, at the age of 21.