NSA. IEC. AFSA. FBI. CIA. CIA. DHS (Department of Homeland Security) DARPA. The Electronic Frontier Foundation (EFF) is one of the most important organizations we have in America today. 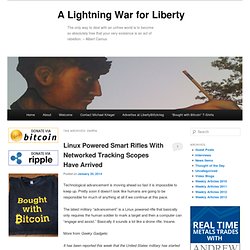 While most of the country lays fast asleep to the dangers of the encroaching surveillance state, the EFF is always vigilantly at work on the front lines. In their latest article, they show that military drones are already flying all over these United States and, using information received from a FOIA lawsuit they provide important details on what is flying and where. You may be shocked at some of their conclusions. From the EFF: These records, received as a result of EFF’s Freedom of Information Act (FOIA) lawsuit against the Federal Aviation Administration (FAA), come from state and local law enforcement agencies, universities and—for the first time—three branches of the U.S. military: the Air Force, Marine Corps, and DARPA (Defense Advanced Research Projects Agency).

Like with any new technology, drones can be put to good use or to evil use. Full article here.

The Politics of US Intelegence Organizations

Past USA Intelegece Organizations. US Nicknames and Codewords. (Updated: January 18, 2014) Below is a listing of nicknames and codewords related to US Signals Intelligence (SIGINT) and Communications Security (COMSEC). Most of them are from the NSA, some are from other government or military agencies. Some of them also have an abbreviation which is shown in brackets. NICKNAMES are generally unclassified. NSA uses single word nicknames, outside NSA they usually consist of two separate words, with the first word selected from alphabetical blocks that are assigned to different agencies by the Joint Staff. CODEWORDS are always classified and always consist of a single word. Due to very strict secrecy, it's not always clear whether we see a nickname or a codeword, but terms mentioned in public sources like job descriptions are of course unclassified nicknames. 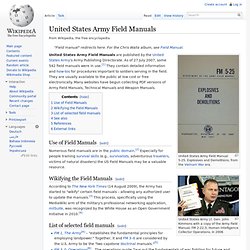 United States Army Lt. Gen. John Kimmons with a copy of the Army Field Manual, FM 2-22.3, Human Intelligence Collector Operations, in 2006 United States Army Field Manuals are published by the United States Army's Army Publishing Directorate. As of 27 July 2007, some 542 field manuals were in use.[1] They contain detailed information and how-tos for procedures important to soldiers serving in the field. Counterinsurgency. The Five Eyes. NDAA. Clapper: I Gave 'The Least Untruthful Answer' To Wyden's 'Beating Your Wife' Question On Data Surveillance. There's been a lot of coverage of the exchange between Senator Ron Wyden and Director of National Intelligence James Clapper, in which Wyden asked Clapper about whether or not data on millions of Americans has been captured. 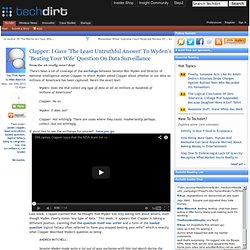 Here's the exact text: Wyden: Does the NSA collect any type of data at all on millions or hundreds of millions of Americans? Clapper: No sir. Wyden: It does not? Clapper: Not wittingly. If you'd like to see the exchange for yourself, here you go: Last week, Clapper claimed that he thought that Wyden was only asking him about emails, even though Wyden clearly states "any type of data. " ANDREA MITCHELL: Senator Wyden made quite a lot out of your exchange with him last March during the hearings.

Senators Wyden And Udall Say They've Seen No Evidence That NSA Surveillance Stopped Dozens Of Terrorist Attacks. Church Committee. Background[edit] Overview[edit] In 1975 and 1976, the Church Committee published fourteen reports on various U.S. intelligence agencies', formation, operations, and the alleged abuses of law and of power that they had committed, with recommendations for reform, some of which were later put in place. 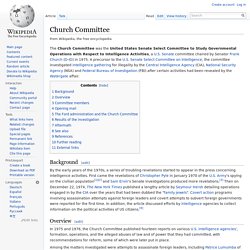 Among the matters investigated were attempts to assassinate foreign leaders, including Patrice Lumumba of the Democratic Republic of the Congo, Rafael Trujillo of the Dominican Republic, the Diem brothers of Vietnam, Gen. René Schneider of Chile and Director of Central Intelligence Allen Welsh Dulles's plan (approved by President Dwight D.

Eisenhower) to use the Sicilian Mafia to kill Fidel Castro of Cuba. Under recommendations and pressure by this committee, President Gerald Ford issued Executive Order 11905 (ultimately replaced in 1981 by President Reagan's Executive Order 12333) to ban U.S. sanctioned assassinations of foreign leaders. Committee members[edit] Opening mail[edit] Counterintelligence. Civilian photo technicians (in back of jeep) working for Counter Intelligence Corps are accounted for at a checkpoint in Potsdam, Germany (July 14, 1945). 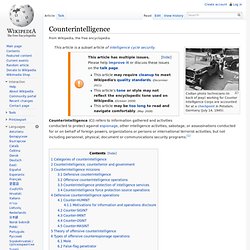