Context Is King: Why Today's MOOCs Don't Meet Corporate Needs. Demystifying the MOOC. When massive open online courses first grabbed the spotlight in 2011, many saw in them promise of a revolutionary force that would disrupt traditional higher education by expanding access and reducing costs. 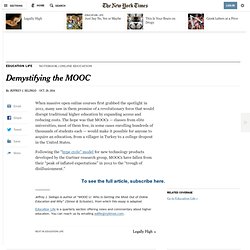 The hope was that MOOCs — classes from elite universities, most of them free, in some cases enrolling hundreds of thousands of students each — would make it possible for anyone to acquire an education, from a villager in Turkey to a college dropout in the United States. Following the “hype cycle” model for new technology products developed by the Gartner research group, MOOCs have fallen from their “peak of inflated expectations” in 2012 to the “trough of disillusionment.”

There are several reasons for the disillusionment. First, the average student in a MOOC is not a Turkish villager with no other access to higher education but a young white American man with a bachelor’s degree and a full-time job. Photo Nearly all MOOCs originate from the world’s top universities. The MOOC Revolution That Wasn’t.

Editor’s note: Dan Friedman is the co-founder of Thinkful. 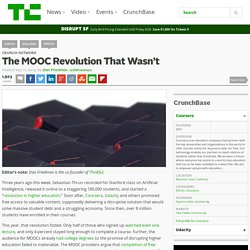 Three years ago this week, Sebastian Thrun recorded his Stanford class on Artificial Intelligence, released it online to a staggering 180,000 students, and started a “revolution in higher education.” Soon after, Coursera, Udacity and others promised free access to valuable content, supposedly delivering a disruptive solution that would solve massive student debt and a struggling economy. Browse free online courses. How MOOCs are flattening corporate training and education. 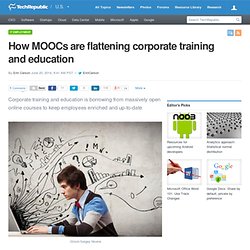 MOOC vs. OER: has evolution killed the revolution? Learn how to code. Can the Current Model of Higher Education Survive MOOCs and Online Learning? Not all U.S. colleges and universities will disappear as a result of new technologies, but clearly some will. 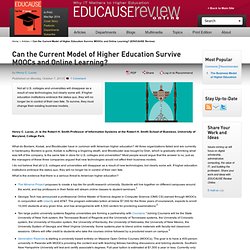 If higher education institutions embrace the status quo, they will no longer be in control of their own fate. To survive, they must change their existing business models. Henry C. Lucas, Jr. is the Robert H. Smith Professor of Information Systems at the Robert H. What do Borders, Kodak, and Blockbuster have in common with American higher education? I do not believe that all U.S. colleges and universities will disappear as a result of new technologies, but clearly some will. What is the evidence that there is a serious threat to American higher education?

Designing and Running a MOOC. MOOCs and the Gartner Hype Cycle: A very slow tsunami. By Jonathan Tapson On September 13, 2013 A lot can change in a year. 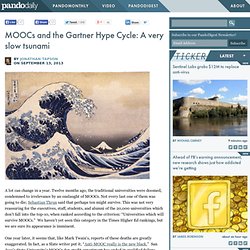 Twelve months ago, the traditional universities were doomed, condemned to irrelevance by an onslaught of MOOCs. Not every last one of them was going to die; Sebastian Thrun said that perhaps ten might survive. This was not very reassuring for the executives, staff, students, and alumni of the 20,000 universities which don’t fall into the top-10, when ranked according to the criterion: “Universities which will survive MOOCs.”

We haven’t yet seen this category in the Times Higher Ed rankings, but we are sure its appearance is imminent. What is a MOOC? Home Page. Coursera. EdTech Round-Up: 99 Google Plus Accounts to Follow. Technology amplifies knowledge, and education is one of the fields that stands to benefit the most from the rapid development of the internet and communication technology. 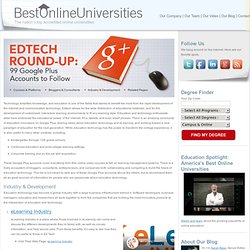 Edtech allows for the wide distribution of educational materials, and for the development of customized, interactive learning environments to fit any learning style. Educators and technology enthusiasts alike have embraced the educational power of the internet, PCs, tablets, and even smart phones. There is an amazing community of education innovators on Google Plus, sharing ideas about education technology and eLearning, and working toward a new paradigm of education for the next generation. Is Online Education Widening the Digital Divide?

Big Ideas Getty By Charla Bear Universities across the country are experimenting with MOOCs (massive open online courses) as a way to make higher education more affordable and accessible to all students. 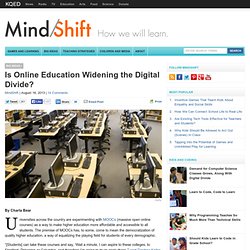 The MOOC Guide. EdX Code. MOOC Around the World - Our Global List of Distance Learning Resources, Part 2. We’re boarding now for the next leg of our journey exploring MOOCs around the world. 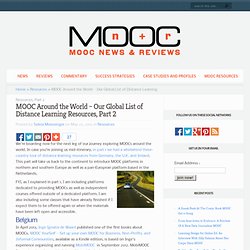 In case you’re joining us mid-itinerary, in part 1 we had a whirlwhind three-country tour of distance learning resources from Germany, the U.K. and Ireland. This part will take us back to the continent to introduce MOOC platforms in northern and southern Europe as well as a pan-European platform based in the Netherlands. FYI, as I explained in part 1, I am including platforms dedicated to providing MOOCs as well as independent courses offered outside of a dedicated platform.

I am also including some classes that have already finished if I expect them to be offered again or when the materials have been left open and accessible. The center of my personal learning network. How to oder (Test-)Plattformen. Moodle. 100 Ways to Learn a Foreign Language Online. Whether you’re getting ready to take an international trip or you’re just ready to brush up on your foreign language skills, there are lots of resources to help you learn online no matter where you study: Rhode Island, South Carolina, South Dakota, Vermont, West Virginia – anywhere! 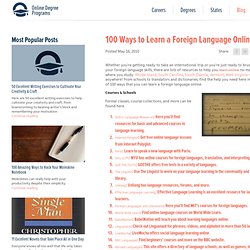 From schools to translators and dictionaries, find the help you need here in this list of 100 ways that you can learn a foreign language online. Courses & Schools Formal classes, course collections, and more can be found here. Dictionary Get quick translation resources from these dictionaries. Phrases. More on Online Language Learning.

Last week’s article on online language learning apparently hit a nerve; not only was it widely e-mailed, but a number of people told me about other language courses that I had missed in my research. 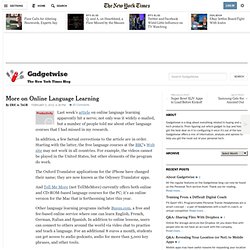 In addition, a few factual corrections to the article are in order. Starting with the latter, the free language courses at the BBC‘s Web site may not work in all countries. For example, the videos cannot be played in the United States, but other elements of the program do work. The Oxford Translator applications for the iPhone have changed their name; they are now known as the Odyssey Translator apps. Open Learning Initiative. At Harvard Extension School, free and open learning is hardly a new concept. In fact, the Extension School was founded with this mission in mind: to create an affordable way for any motivated student to take courses at Harvard. We stay true to this mission today, offering several free courses and nearly 800 for-credit courses at reasonable tuition rates. Explore our series of free or low-cost courses below.