Some iPad Management Tips, Part 2! We have FINALLY gotten cases for our iPad 2s! 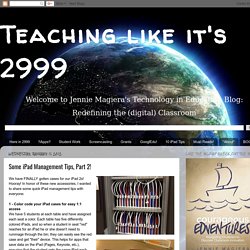 Hooray! In honor of these new accessories, I wanted to share some quick iPad management tips with everyone: 1 - Color code your iPad cases for easy 1:1 access We have 5 students at each table and have assigned each seat a color. Each table has five differently colored iPads, and so when a student in seat "red" reaches for an iPad he or she doesn't need to rummage through the bin; they can easily see the red case and get "their" device. 2- Create desktop backgrounds to show numeration The cases cover the backs - where we originally had numerated stickers showing which iPad was which.

I did it this way - rather than creating the image on the iPad - for two reasons. 3 - Create shortcuts to frequently visited sites (Study Island, Class Google Site, etc) Open your iPad's Safari app and type in the URL of the site that you'd like to visit. Subject /Age Level Apps. Web2 - 4 Languages Teachers - Bloom's & Gardner's. Aotearoa - Initial iPad Setup. How To Safely Clean Your Tablet Or Smartphone's Touchscreen. Cleaning a smartphone touchscreen is simple. 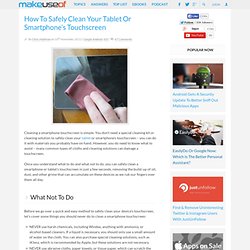 You don’t need a special cleaning kit or cleaning solution to safely clean your tablet or smartphone’s touchscreen – you can do it with materials you probably have on hand. However, you do need to know what to avoid – many common types of cloths and cleaning solutions can damage a touchscreen. Once you understand what to do and what not to do, you can safely clean a smartphone or tablet’s touchscreen in just a few seconds, removing the build-up of oil, dust, and other grime that can accumulate on these devices as we rub our fingers over them all day. What Not To Do Before we go over a quick and easy method to safely clean your device’s touchscreen, let’s cover some things you should never do to clean a smartphone touchscreen: NEVER use harsh chemicals, including Windex, anything with ammonia, or alcohol-based cleaners. This process will be different if you have a screen protector on your screen. Get a Microfiber Cloth Why a microfiber cloth?

A Comprehensive Guide for Effective Use of iPad in Teaching. iPad, this mystic gadget that has been making the news since its launch a few years ago, has now secured a strong foothold inside different educational settings. 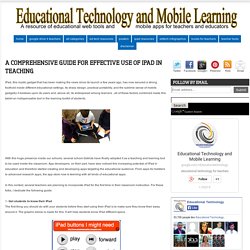 Its sharp design, practical portability, and the sublime sense of mobile gadgetry it bestows upon its users and, above all, its widespread among learners , all of these factors combined made this tablet an indispensable tool in the learning toolkit of students. With this huge presence inside our schools, several school districts have finally adopted it as a teaching and learning tool to be used inside the classroom. App developers, on their part, have also noticed this increasing potential of iPad in education and therefore started creating and developing apps targeting the educational audience. From apps for toddlers to advanced research apps, the app store now is teeming with all kinds of educational apps. In this context, several teachers are planning to incorporate iPad for the first time in their classroom instruction. 1 to 1 iPad Class. iCan iPad - The Uncommon Core. iPads in Guided Reading.

Before a class set of iPads I was differentiating my literacy centers for guided reading. 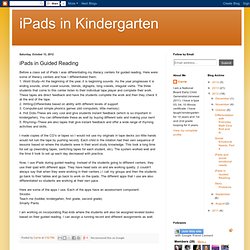 Here were some of literacy centers and how I differentiated them: 1. Word Study--At the beginning of the year, it is beginning sounds. As the year progresses it is ending sounds, short vowel sounds, blends, digraphs, long vowels, irregular verbs. The three students that come to this center listen to their individual tape player and complete their work. These tapes are direct feedback and have the students complete the work and then they check it at the end of the tape. 2. I made copies of the CD's or tapes so I would not use my originals in tape decks (so little hands would not ruin the tape by pushing record). Now, I use iPads during guided reading. Here are some of the apps I use. The Best Free iPad and iPhone Kids' Apps According to Apple. EmailShare 18EmailShare There’s a difference between popular kids’ apps and games that grab the world’s fancy momentarily, and the best kids’ apps and games that become all-time favorites, classics and “must-haves.” 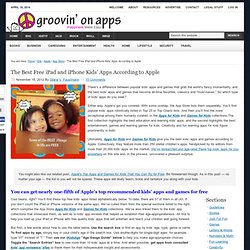 So which type of kids’ apps do you seek? Either way, Apple’s got you covered. With some overlap, the App Store lists them separately. The Best Resources For Beginning iPad Users. Though I haven’t gotten an iPad yet (NOTE: Now I have!) 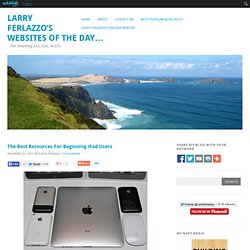 , we did get one for my mother-in-law. So, with an eye towards helping her now, and me in the future, I put out a call to readers to their suggested resources as well as hunting for them on my own. You might also be interested in The Best Sites For Beginning iPhone Users Like Me. Here are my choices, and choices suggested by readers (their recommendations are better than mine!) , as The Best Resources For Beginning iPad Users: iPad Getting Started is from TC Geeks. The 10 best iOS apps of 2011 comes from The Telegraph. The best iOS apps for children, 2011 is also from The Telegraph. The top 50 iPad apps is from The Guardian. ChemCrafter. iPod Touch & iPad Resources.

Parents wary to embrace iPads in school. The Government is considering giving more money to schools for smart devices after a Bay of Plenty school dished out iPad minis to pupils. 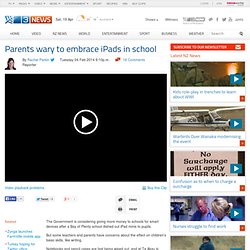 But some teachers and parents have concerns about the effect on children's basic skills, like writing. Notebooks and pencil cases are fast being wiped out, and at Te Akau ki Papamoa Primary School in the Bay of Plenty pupils are swiping and tapping their way through class, each provided with a $450 iPad mini. "It allows us greater access to the curriculum, instantaneously," says principal Bruce Jepsen.