5-10min videos to teach and for fun

If You Were the President... Watch Forces of Nature Collide in This Gorgeous Illustrative Short Film. How Failure Actually Brings Us Closer to Achieving Our Goals. My.happify.

Thomas Suarez: A 12-year-old app developer. Are You Smart Enough To Get These Brain Teasers? Is Your Red The Same as my Red? Describing Colors To Blind People. Valspar Color For The Colorblind. Flightradar24.com - Live flight tracker! In order to save data consumption Flightradar24 web page times out after 30 minutes. 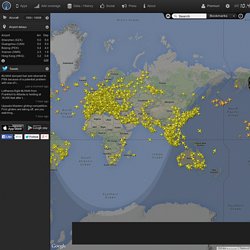 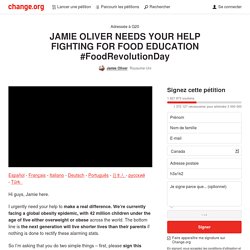 I urgently need your help to make a real difference. We’re currently facing a global obesity epidemic, with 42 million children under the age of five either overweight or obese across the world. The bottom line is the next generation will live shorter lives than their parents if nothing is done to rectify these alarming stats. So I’m asking that you do two simple things – first, please sign this petition to show your support for compulsory practical food education in schools across the world, then, most importantly, share it via your social networks. It’s essential that we arm future generations with the life skills they urgently need in order to lead healthier, happier, more productive lives. If you can help me get millions of people to sign this petition, we can create a movement powerful enough to force all G20 governments to take action.

Big love Jamie Oliver x www.foodrevolutionday.com. The science of spiders. How to Think Critically and Learn Anything. Line of Sight. Solar FREAKIN' Roadways! Short Documentary about Solar Roadways. The basic building block of what has been dubbed by its creators, electrical engineer Scott Brusaw and his wife Julie, a solar roadway. 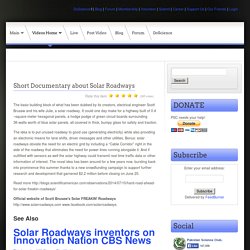 It could one day make for a highway built of 0.4 –square-meter hexagonal panels, a hodge podge of green circuit boards surrounding 36-watts worth of blue solar panels, all covered in thick, bumpy glass for safety and traction. The idea is to put unused roadway to good use (generating electricity) while also providing an electronic means for lane shifts, driver messages and other utilities. Bonus: solar roadways obviate the need for an electric grid by including a “Cable Corridor” right in the side of the roadway that eliminates the need for power lines running alongside it. And if outfitted with sensors as well the solar highway could transmit real time traffic data or other information of interest. Mae Jemison - Because of Them, We Can. Stevie Wonder - Because of Them, We Can. Cameron's interview - CANADA - #HUMAN.

Maya Angelou - Because of Them, We Can. Why Is The Sky Blue? Barrington Irving: Got 30 Dollars in My Pocket. Genetics - Genetics : What are Genes? Meet The 13-Year-Old Girl Who Might Be The World's Best Female Rock Climber - BuzzFeed News. Ode to CAN read by Toni Colette. Motivational Video For Students. CYMATICS - Science Vs. Music - Nigel Stanford.

Maori Creation Story in Sand Art. Amazing Chain Reactions! Hot Scots drum line - 2011 - Nigel - Talent Show at LHHS. Get Shocked To See How Small Our Earth Is ? History of the Earth in 5 1/2 minutes. Famous Failures. Nope, Nobody Spilled Breakfast. These Fell From The Sky, And They’re Much Tastier. If You’re A Bee. Homeless in Orlando. Brain Tricks - This Is How Your Brain Works. 6,500 Dominoes - Despicable Me Minion?!

Earth - The story of life in under three minutes. Europa: Ocean World. 10 Most Massive Sixes In Cricket History. Photoshopping Real Women Into Cover Models. Can dropping a coin from a tall building really be deadly? A Pep Talk from Kid President to You. World's Toughest Job - #worldstoughestjob. Tai Chi 4 Kidz. Pohl (2006) Thinkers Keys reading. Unreported World. Tree Change Dolls I The Feed. 2CELLOS - Thunderstruck [OFFICIAL VIDEO] How Making Robots Captivates Kids' Imaginations. Violet: I think school would be a lot more engaging if we were asked to solve complex problems. 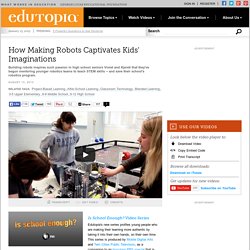 Building a robot and seeing it run and seeing it complete tasks is definitely more satisfying than any schoolwork I've ever done. Getting an A on the test, that's cool, but seeing something I have built with my own hands move is way more satisfying. So I'll try connecting a one-ten-nine. I'll put a jumper underneath. Man: Yeah, just don't overlap them, right? Woodie: I think a reasonable way to think about robotics is birthing a machine that can be over there and do something that you either taught it to do, or that you're commanding it to do now. Violet: So do you guys know how to test a motor with a battery? Girl: Not really. Violet: Okay, here. So I grew up in a really geeky family. Kjersti: You could do it like that, or you could do it to the top here, so that way the hub would be on the outside.

It was something completely new for me. We have two motors for each side, Kjersti: Yes. Kid President's Pep Talk to Teachers and Students! Bethany Hamilton - Surfs Like A Girl by Aaron Lieber. Risks and challenges High performance sports films undoubtedly carry several risks and challenges. 1. 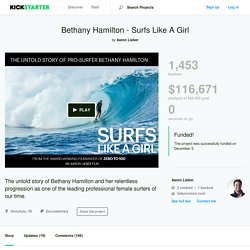 COST Most quality films in any genre are considerably expensive to shoot, and high performance sports films are certainly no exception to the rule. They rely on captivating footage that draws the audience into the screen and invites them to be part of the action. So much of our film depends on incredible footage that makes the viewer feel like they are right there with the athlete. Camera Gear: To obtain the best footage we will be shooting almost exclusively on RED cameras (with some GoPro), utilizing a range of camera techniques that will include hand held, classic tripod, dollies and finally a drone camera for our stunning aerial footage.

Engineers blow stuff up with Science. Instructions For A Bad Day - Shane Koyczan Poem - Lyrics On Screen. OneRepublic - I Lived. Andrew Huang Raps In 5 Languages. This Man Filmed The Skies For 7 Days. What He Recorded Is Breathtaking! Tamara_Film. 99 Red Balloons - played with red balloons. This Sign Language Version of Pharrell's 'Happy' Song Will Make You Smile Out Loud. Troll- Shane Koyczan. Perseverance. The story of Nick Vujicic. 10 Near Indestructible Creatures. Yoga for Kids. Inspire Her Mind. Science There’s a young 4-year old girl shuffling through a chest full of various dress-up clothes. 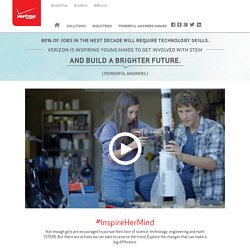 The copy asks: Does dress-up determine her future? Scroll to the left, and the girl picks up a princess dress from the chest. She walks over to a mirror and holds the dress in front of her. The girl in the mirror, representative of her imagination, is wearing the dress and holding a wand. Scroll to the right, and the girl picks an astronaut suit out of the chest. Space Shuttle Launch Audio - play LOUD (no music) HD 1080p. An Island made from plastic bottles by Richart Sowa. The "Happy" song on Sesame Street (Long version) A Mystery: Why Can't We Walk Straight? Beginner Conversational Chinese Lesson 4 - Numbers (0-10) Dance Break: Watch Taylor Swift 'Shake It Off' In Her New Video. Deep Sea Explorers Stumble Upon A Creature They Can Hardly Believe Is Real. While there’s no shortage of weird and wacky ideas in science fiction about what creatures from other planets might look like, few are quite as remarkable as those that can actually be found right here on Earth. 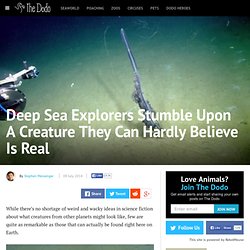 Recently, a team from the Nautilus Live expedition piloting a remotely operated vehicle (ROV) happened upon one of the most fascinating-looking lifeforms in the world -- this rare, purple siphonophore roving through the ocean’s depths. Even the experienced deep sea explorers, well-acquainted with the marine animals, had a hard time accepting that what they were seeing was really real. “Wow. Okay, that’s awesome,” says one ROV operator. “I can’t believe that’s a living thing.” Amazingly, although this appears to be a single jellyfish-like animal, it is in fact a roving colony made up of thousands of individual organisms, called zooids, each contributing to the whole. Deep Sea News writer R.R. Tai Chi 24-form. All About That Space. Polar Bears Film (Coca-Cola 2013)