Future - Will we ever… live in underground homes? In many respects, Bernadette Roberts’ three-bedroom house is like any other. 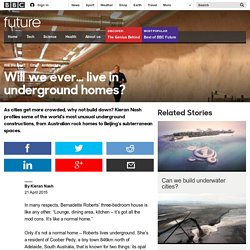 “Lounge, dining area, kitchen – it’s got all the mod cons. It’s like a normal home.” Only it’s not a normal home – Roberts lives underground. She’s a resident of Coober Pedy, a tiny town 846km north of Adelaide, South Australia, that is known for two things: its opal mines, and its “dugouts” – subterranean homes carved from the rock, which house 80% of the town’s population. Coober Pedy is an inhospitable place, where temperatures can reach 50C. Roberts says “on a good day”, when temperatures outside are in the high 30s or low 40s, the temperature in her dugout is around 23 to 25C. While extreme weather has forced Coober Pedy’s residents underground, it’s not the only place on Earth where authorities are looking beneath the surface for new urban space. With two-thirds of the world’s population expected to live in cities by 2050, urban land is expected to become an increasingly limited resource. 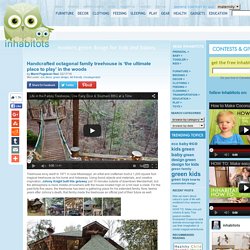 In 1971 in rural Mississippi, an artist and craftsman built a 1,200 square foot magical treehouse as his home and hideaway. Using found objects and materials, and creative inspiration, Johnny Knight built this getaway just 10 minutes outside of downtown Mendenhall, but the atmosphere is more middle-of-nowhere with the house located high on a hill near a creek. For the past forty-five years, the treehouse has been a gathering place for his extended family.

Now, twelve years after Johnny’s death, that family made the treehouse an official part of their future as well. After Johnny’s death, another artist purchased the home, yet she always welcomed Johnny’s relatives into the space where they had spent their childhoods and enjoyed their family getaways. RELATED | Dad Builds Dreamy, Airy Two-Story Treehouse with His Kids A winding staircase leads into the main area with an additional ladder staircase leading into a loft. Via Today All images courtesy of Zillow. Gallery - Welcome to Arched Cabins! You Can Own & Live In One Of These Incredible Arched Houses For Under $1000! AwesomeJelly.com. They are called ‘Arched Cabins‘ and they are incredibly awesome! 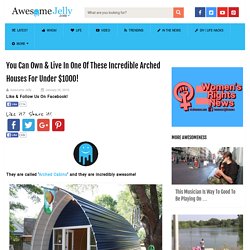 The sizing options that the company offers their customers is rather remarkable, but what is truly remarkable is the pricing. You can buy an 8′ x 8′ unit for just $960.00 and with all the upgrades it is just $1352.00. Sizes range from the smaller 8′ x 8′ unit right up through to a massive 24′ x 40′ unit! The company will also deliver the arched home straight to your door and build it for you, wherever you want it to go! For the price, these are a steal! There is even a trailer attachment option where they company will build an arched cabin directly onto a trailer so you are able to travel with your new pad! Tiny homes by Evelyne Adam. Heimplanet mavericks: a geodesic inflatable tent for extreme conditions. May 12, 2014 heimplanet mavericks: a geodesic inflatable tent for extreme conditions heimplanet mavericks: a geodesic inflatable tent for extreme conditionsall images courtesy heimplanet based on the specific molecular and crystal structure of the diamond, heimplanet has introduced ‘mavericks’, a multi-purpose tent designed for extreme conditions. following the footsteps of ‘the cave’ – a 2-3 person sleeper – it offers an internal height of two meters and more then 13 square meters of space, the mavericks tent incorporates inflatable diamond grid (IDG) technology and a multi chamber safety system. after inflation, the structure can be separated into ten individual air chambers to ensure an emergency stability in case of a defect. the special geodesic structure has been developed to withstand high wind speeds up to 180km/h, and is pre-assembled so it can easily be set up by an individual. all parts from the inflatable diamond grid – IDG can be easily repaired or replaced. 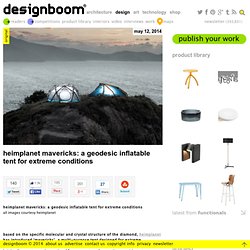 River Side House in Horinouchi by Mizuishi Architect Atelier. Located in Tokyo, Japan, this small home by Mizuishi Architect Atelier, this small home was built on a tiny triangular site along a river. With its small footprint of just 29 square meters, the home makes good use of space for its inhabitants – a couple and their daughter. [via Contemporist] A project diary about building a round, energy efficient, prefab house.