Play as a Basis for Placemaking – Lecture – UDL London.

WHAT IS PLACEMAKING? STUDIOS. Indigenous Placemaking in Central Melbourne: Representations, Practices and Creative Research. Northcote Koorie Mural, Thornbury (Photo: R Berg 2013, courtesy Megan Evans and VAAL) In 2008, representatives from the Victorian Traditional Owners Land Justice Group, Reconciliation Victoria and the City of Melbourne Arts and Culture branch formed a working group to advance a proposal for an indigenous cultural precinct in the heart of Melbourne. 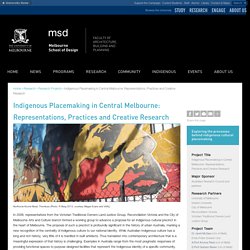 The proposal of such a precinct is profoundly significant in the history of urban Australia, marking a new recognition of the centrality of indigenous culture to our national identity. While Australian Indigenous culture has a long and rich history, very little of it is manifest in built artefacts. Thus translation into contemporary architecture that is a meaningful expression of that history is challenging. Examples in Australia range from the most pragmatic responses of providing functional spaces to purpose designed facilities that represent the Indigenous identity of a specific community.

Media. Melbourne Placemaking Series. Rethink urban - Top 5 place making trends in Australia. Place making is increasingly seen as responding to a gap in our current approach to design and one that can have major benefits to the entire community. 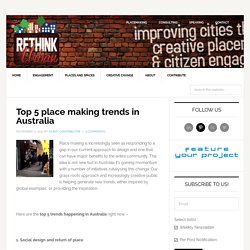 This idea is not new but in Australia it’s gaining momentum with a number of initiatives catalysing this change. Our grass roots approach and increasingly creative public is helping generate new trends, either inspired by global examples, or providing the inspiration. Here are the top 5 trends happening in Australia right now – 1. Social design and return of place Over the past decade, the public has become more engaged and aware of urban issues – sometimes creating misunderstanding and tension but, for the most part, creating more liveable communities. In Australia, we’re closely aligned with Canadian attitudes towards engagement but where to from here?

2. In 2011, a group of young, interested and creative individuals were motivated to eat healthy and grow locally. 3. If the cheap rent craze hasn’t hit a town near you, it soon will! 4. The creation of place in the experience economy. DIARY: Four weeks in Australia. This past August, two of us spent a total of four weeks in Australia, following a two week visit to Australia and New Zealand last year by Ethan Kent. 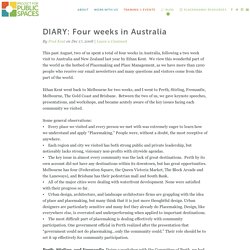 We view this wonderful part of the world as the hotbed of Placemaking and Place Management, as we have more than 1200 people who receive our email newsletters and many questions and visitors come from this part of the world. Ethan Kent went back to Melbourne for two weeks, and I went to Perth, Stirling, Fremantle, Melbourne, The Gold Coast and Brisbane. Between the two of us, we gave keynote speeches, presentations, and workshops, and became acutely aware of the key issues facing each community we visited. Some general observations: • Every place we visited and every person we met with was extremely eager to learn how we understand and apply “Placemaking.” Perth, Stirling, and Fremantle. Melbourne. Gold Coast. Brisbane. Home. The City Repair Project.

The Atrium — An Example In Placemaking - CitySpaces. Creative Placemaking. SC presentation V3 size reduced. Rochecouste. Participate Melbourne. Forgotten%20Spaces%20Revitalising%20Perths%20Laneways. Last stone left: wellbeing and Aboriginal placemaking in the city. Earlier this year, I sat amongst a crowd of planners, designers and architects at the Planning Institute of Australia, National Congress. 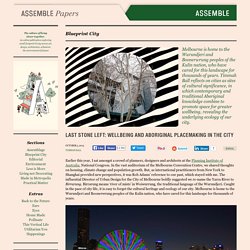 In the vast auditorium of the Melbourne Convention Centre, we shared thoughts on housing, climate change and population growth. But, as international practitioners from New York to Shanghai provided new perspectives, it was Rob Adams’ reference to our past, which stayed with me. The influential Director of Urban Design for the City of Melbourne boldly suggested we re-name the Yarra River to Birrarung. Birrarung means ‘river of mists’ in Woiwurrung, the traditional language of the Wurundjeri. Caught in the pace of city life, it is easy to forget the cultural heritage and ecology of our city. Night view across Birrarung Marr and the Melbourne city skyline. During the congress, new approaches to urban planning using digital technologies dominated discussions. 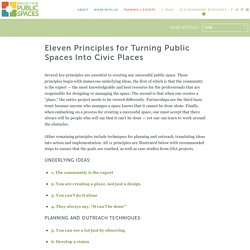 These principles begin with numerous underlying ideas, the first of which is that the community is the expert — the most knowledgeable and best resource for the professionals that are responsible for designing or managing the space. The second is that when one creates a “place,” the entire project needs to be viewed differently. Partnerships are the third basic tenet because anyone who manages a space knows that it cannot be done alone. Finally, when embarking on a process for creating a successful space, one must accept that there always will be people who will say that it can’t be done — yet one can learn to work around the obstacles. Other remaining principles include techniques for planning and outreach, translating ideas into action and implementation. Underlying Ideas: Planning And Outreach Techniques: Translating Ideas into Action: Implementation: 1. Case Study: Tapping Community Expertise Recommended Steps: