What the idea of civilisational ‘collapse’ says about history. There is no such thing as western civilisation. Like many Englishmen who suffered from tuberculosis in the 19th century, Sir Edward Burnett Tylor went abroad on medical advice, seeking the drier air of warmer regions. 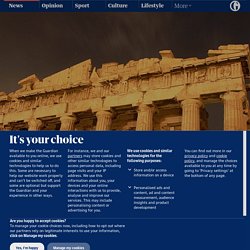 Tylor came from a prosperous Quaker business family, so he had the resources for a long trip. In 1855, in his early 20s, he left for the New World, and, after befriending a Quaker archeologist he met on his travels, he ended up riding on horseback through the Mexican countryside, visiting Aztec ruins and dusty pueblos. Tylor was impressed by what he called “the evidence of an immense ancient population”. And his Mexican sojourn fired in him an enthusiasm for the study of faraway societies, ancient and modern, that lasted for the rest of his life.

In 1871, he published his masterwork, Primitive Culture, which can lay claim to being the first work of modern anthropology. But Tylor thought that the word could mean something quite different, and in part for institutional reasons, he was able to see that it did. The Chessboard Fallacy. “In the great chess-board of human society, every single piece has a principle of motion of its own.”— Adam Smith One of our favorite dictums, much referenced here, is an idea by Joseph Tussman, about getting the world to do the work for you: “What the pupil must learn, if he learns anything at all, is that the world will do most of the work for you, provided you cooperate with it by identifying how it really works and aligning with those realities. If we do not let the world teach us, it teaches us a lesson.” By aligning with the world, as it really is and not as we wish it to be, we get it to do the work for us.

Tussman’s idea has at least one predecessor: Adam Smith. The Most Intolerant Wins: The Dictatorship of the Small Minority – Medium. How Europe will eat Halal — Why you don’t have to smoke in the smoking section — Your food choices on the fall of the Saudi king –How to prevent a friend from working too hard –Omar Sharif ‘s conversion — How to make a market collapse T he best example I know that gives insights into the functioning of a complex system is with the following situation. 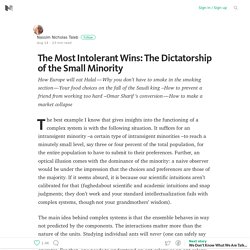 It suffices for an intransigent minority –a certain type of intransigent minorities –to reach a minutely small level, say three or four percent of the total population, for the entire population to have to submit to their preferences. Further, an optical illusion comes with the dominance of the minority: a naive observer would be under the impression that the choices and preferences are those of the majority. The main idea behind complex systems is that the ensemble behaves in way not predicted by the components. The interactions matter more than the nature of the units. Criminals With Peanut Allergies A strange idea hit me. How Self-Organization Happens — Open Participatory Organization. How Self-Organization Happens … and why you can trust it Values drive all organizational life If you pay attention throughout the day, you will see that your thoughts are constantly floating on waves of shifting values. 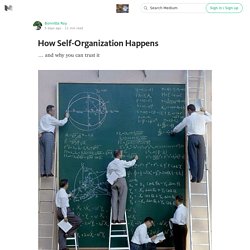 While your thoughts govern your conscious actions, the underlying values directly influence your unconscious behaviors, like shifting in your seat, checking your email, getting up for the fourth cup of coffee. The Pace Layers of Civilization. One of my favorite diagrams is from Stewart Brand’s book “The Clock of the Long Now” Derived from a diagram in Brand’s prior book “How Building Learns”, alongside an idea of Freeman Dyson’s, Stewart Brand expands on the idea of the pace layers of civilization in The Clock of the Long Now. 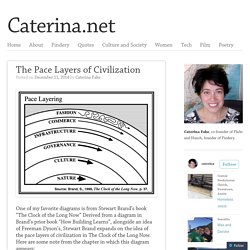 Here are some note from the chapter in which this diagram appears: “The fast parts learn, propose, and absorb shocks; the slow parts remember, integrate, and constrain. Pace Layer Thinkers: Stewart Brand and Paul Saffo’s Conversation at The Interval, Recap and Full Audio. Photo by Julie Momméja On January 27, 02015 Long Now Foundation founding Board members Stewart Brand and Paul Saffo spoke at Long Now’s San Francisco venue The Interval about Pace Layers Thinking to a sold out crowd. 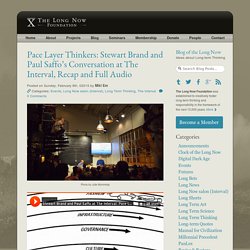 This was the 17th event in our Conversations at The Interval series since it began in May 02014. We informally call these “salon talks” due to their small size (relative to our SALT series) which allows our speakers and audience to meet and continue the discussion after the microphones are turned off. It’s only the second time we’ve posted audio from an Interval talk.

We’re proud to share this talk by two of our founding Board members. Stewart Brand and Paul Saffo — photos by Ian Kennedy Photo by Mikl Em. What to Do When an Online Community Starts to Fail - Walter Frick. By Walter Frick | 9:38 AM October 31, 2013 Success breeds success online. 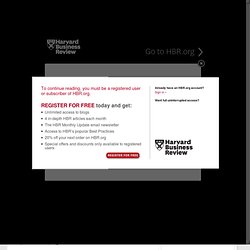 Indeed, if there is one maxim that dominates the fate of digital communities it is that of network effects — the more users participating in a community, the more valuable it will be to new users. As networks like Twitter and Facebook scale, their advantage over nascent platforms becomes seemingly insurmountable. And yet scale is no guarantee of sustainability, as two recent examples illustrate. In one case, Yelp faces a class action suit by users in California alleging that they deserve to be paid for their contributions, along with allegations by researchers that up to 20 percent of its reviews are fake; in another, MIT Technology Review reports on Wikipedia’s shrinking contributor base and the challenges it faces in attracting new and more diverse editors.

Rewarding Top Users is Important, But Not Enough If catering to existing contributors can’t stem contributor unrest and abandonment, what can? (Emphasis mine.) Dana Meadows: 12 Leverage Points to Change the World. Archimedes’ Lever“Give me a lever long enough … and I shall move the world” - Archimedes Every organization, company or “system” can be changed in only certain ways. 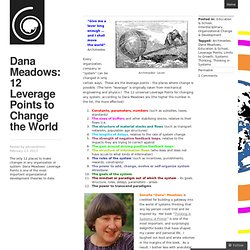 Leverage_Points.pdf (application/pdf Object) Minority rules: Scientists discover tipping point for the spread of ideas. The Emerging Science of Superspreaders (And How to Tell If You're One Of Them) Who are the most influential spreaders of information on a network? 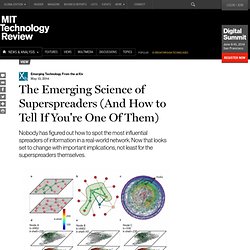 That’s a question that marketers, bloggers, news services and even governments would like answered. Not least because the answer could provide ways to promote products quickly, to boost the popularity of political parties above their rivals and to seed the rapid spread of news and opinions. So it’s not surprising that network theorists have spent some time thinking about how best to identify these people and to check how the information they receive might spread around a network. Indeed, they’ve found a number of measures that spot so-called superspreaders, people who spread information, ideas or even disease more efficiently than anybody else. But there’s a problem. Nasa-funded study: industrial civilisation headed for 'irreversible collapse'? A new study partly-sponsored by Nasa's Goddard Space Flight Center has highlighted the prospect that global industrial civilisation could collapse in coming decades due to unsustainable resource exploitation and increasingly unequal wealth distribution. 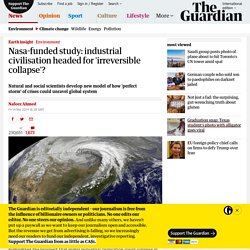