Ben Crystal. Ben Crystal (born 1977) is an English actor, author, and producer, best known for his work on performing and promoting William Shakespeare in "Original Pronunciation". 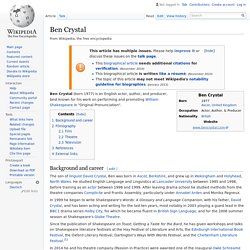 Background and career[edit] The son of linguist David Crystal, Ben was born in Ascot, Berkshire, and grew up in Wokingham and Holyhead, North Wales. He studied English Language and Linguistics at Lancaster University between 1995 and 1998, before training as an actor between 1998 and 1999. After leaving drama school he studied methods from the theatre companies Complicite and Frantic Assembly, particularly under Annabel Arden and Monika Pagneux. Ben Crystal (@bencrystal) Ben Crystal: Books, Biography, Blog, Audiobooks, Kindle. Ben Crystal, Author at Personal Liberty® Join the fun as Ben Crystal peers into the future to see how 2016 will shake out for some of the Great Eight’s favorite subjects. 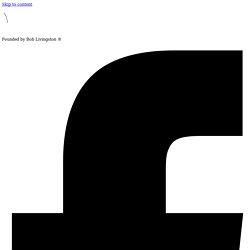 Presented in hi-def, FOR FREE! It’s The Great Eight, from the Personal Liberty Digest®! According to spokeshole John Kirby, the State Department had a terrific year, filled from Countering Violent Extremism Summits to San Bernardino, California, with “success.” It’s just that State Department officials define “success” somewhat differently than the rest of the species. In 2015, the Republicans stripped the ball from the Democrats and charged toward the wrong end zone. What do people on the naughty list want? ‘Twas the night before Christmas, and in the White House not a cretin was stirring; not even Sharpton, that louse. Who’s this Paul Ryan guy? Here at the Personal Liberty Digest®, we’re polling higher than Lindsay Graham! You had to know it was coming. The Democrats are on someone’s side; it’s just not yours. A Democratic whodunit? Obama plays to lose. David Crystal. 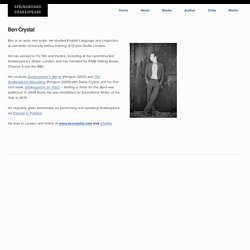 He studied English Language and Linguistics at Lancaster University before training at Drama Studio London. What's it like to speak Shakespeare around the globe? As we celebrate the 450th anniversary of Shakespeare’s birth, UK actor, author and producer Ben Crystal relates what it's like to speak the work of a playwright who has contributed so many new words and phrases to the English language. 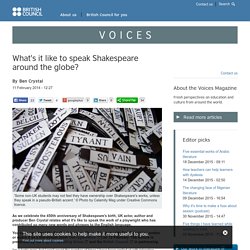 I'm a lucky man, but I can’t count the number of times I have been smiled at with toleration rather than agreement, after I’ve suggested Shakespeare's plays are manuals on how to perform, not books to be read. I’ve said it so many times surely everyone must have heard this by now, but still people look at me as if I’ve suggested we teach our younglings how to slaughter fluffy cats with wooden spoons. Shakespeare's Accent: How Did The Bard Really Sound? : Monkey See. How were William Shakespeare's words pronounced more than 400 years ago? 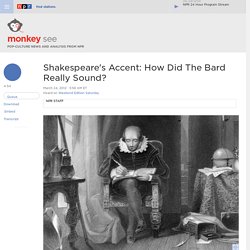 A new recording from the British Library aims to replicate the authentic accent of Shakespeare's day. Above, a depiction of the dramatist at work in his study, by A.H. Payne. Edward Gooch/Getty Images hide caption toggle caption Edward Gooch/Getty Images. Authors similar to Takuji Ichikawa. Authors similar to Felicia Ricci. William Shakespeare. Here’s How 600 People Around the World Say the Word ‘Potato’ You might think you don’t have an accent, but you do. 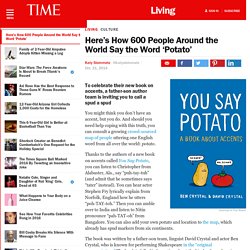 And should you need help coping with this truth, you can consult a growing crowd-sourced map of people uttering one English word from all over the world: potato. Thanks to the authors of a new book on accents called You Say Potato, you can listen to Christopher from Alabaster, Ala., say “puh-tay-tuh” (and admit that he sometimes says “tater” instead). You can hear actor Stephen Fry lyrically explain from Norfolk, England how he utters “poh-TAY-toh.” Then you can amble over to India and listen to Nitin pronounce “pah-TAT-oh” from Bangalore. You can also add your own potato and location to the map, which already has spud markers from six continents. UHD Lecture Ben Crystal Shakespeare and Language. DCblog.

English: Understanding Shakespeare. William Shakespeare is considered by many to be the greatest playwright of all time. 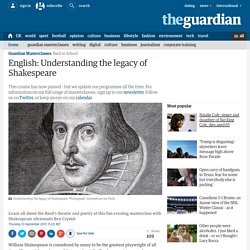 If you wish you knew a bit more about the Bard, or want to reawaken your passion for his plays and poems, don’t miss out on this fabulous masterclass with Ben Crystal. In the space of just two hours, you’ll receive fascinating insights into Shakespeare’s working processes – from how his famous sonnets were constructed to how his plays were rehearsed and performed. Plus, you’ll learn about some of the clues he left behind in his writing, including how he used cue-scripts and the ways he directed his actors. Ben is one of the world’s leading experts on Shakespeare, having founded the Passion in Practice theatre company and co-written many books on the subject. During this unique class, Ben will argue that the works of the famous “Bard of Avon” are tools to be used and stories to be performed – not books to be read.

More about your teacher… Details.