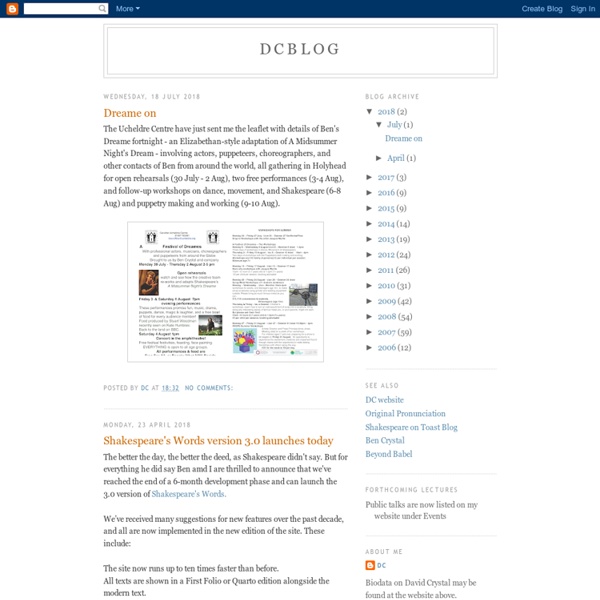 A correspondent writes to ask if I could explain the difference in the meaning between the following sentences: (1) I would like to have studied philosophy. (2) I would have liked to study philosophy. (3) I would have liked to have studied philosophy. The underlying issue is one of focus. Where is the perfective meaning inherent in the auxiliary verb have being focused? In (1) the liking is now and the studying is some time in the past. In (2) the liking is some time in the past (and thus the study). In (3) both the liking and the study are in the past.

ELT Rants, Reviews, and Reflections In my last post, I looked at some blog posts I wished I’d commented on in 2013. In this post, I’d like to share some newer blogs that have caught my attention. Please do click through to them if you don’t want me to get all stroppy. Please also let me know in the comments about other new ELT blogs which have caught your attention and I will happily list them too. This is not my first time to share new ELT blogs.

Language Log An important rallying cry and usage distinction made by allies of undocumented workers in the current cultural battle over immigration in the United States is Elie Wiesel's assertion above: "No human being is illegal." In the quote, Wiesel gives examples of the kinds of adjectives that he feels can denote properties of people (fat, skinny, beautiful, right, and wrong). On the other hand, calling a person 'illegal', he says, is a contradiction in terms. International Book Day and St. George's Day April 23rd was declared International Book Day by UNESCO in 1995, but it has been celebrated as such in Spain since 1923. The reason why this day was chosen to represent the book is that two of the greatest writers in the world, Cervantes and Shakespeare, died on 23rd April 1616, and in the case of Shakespeare, he was also born on that day in 1564. Isn't it a coincidence?

Ben Crystal Ben Crystal (born 1977) is an English actor, author, and producer, best known for his work on performing and promoting William Shakespeare in "Original Pronunciation". Background and career[edit] The son of linguist David Crystal, Ben was born in Ascot, Berkshire, and grew up in Wokingham and Holyhead, North Wales. He studied English Language and Linguistics at Lancaster University between 1995 and 1998, before training as an actor between 1998 and 1999. After leaving drama school he studied methods from the theatre companies Complicite and Frantic Assembly, particularly under Annabel Arden and Monika Pagneux.

8 Tech Tools to Get to Know Your Students for Back to School The first day of class can be daunting. Students are curious about the new faces around them, intimidated–even frightened by the prospect of so many people they know nothing about. As a teacher, you might feel the same way. You knew everything about last year’s students, got excited when their baseball team won the playoffs, cried with them when a favorite pet passed away, cheered when they got an A in math. Those details–that intimate knowledge–helped you understand what motivated them so you could differentiate instruction to reach each of them where they were.

How to make your lessons outstanding Kelly Wood is assistant head at Southdale C of E junior school in West Yorkshire and she ﻿won the Specialist Schools and Academies Trust Award for ﻿﻿﻿Outstanding New Teacher of the year ﻿﻿﻿in 2010. H﻿﻿﻿﻿﻿﻿﻿﻿﻿﻿﻿﻿ere Kelly shares some of her top tips for making your lessons outstanding. Give students ownership I believe that giving children more ownership of their learning is vital if you want them to have a deeper level of engagement with and understanding of their education. The Mantle of the Expert approach developed by West Yorkshire teacher Dorothy Heathcote is a fantastic way to do this. Here’s How 600 People Around the World Say the Word ‘Potato’ You might think you don’t have an accent, but you do. And should you need help coping with this truth, you can consult a growing crowd-sourced map of people uttering one English word from all over the world: potato. Thanks to the authors of a new book on accents called You Say Potato, you can listen to Christopher from Alabaster, Ala., say “puh-tay-tuh” (and admit that he sometimes says “tater” instead). You can hear actor Stephen Fry lyrically explain from Norfolk, England how he utters “poh-TAY-toh.” Then you can amble over to India and listen to Nitin pronounce “pah-TAT-oh” from Bangalore.

25 BEST WEBSITES FOR LEARNING ENGLISH I want the new e-book! How do you learn English in your free time? Do you meet internationals in cafés, do you self-study using books, do you get on the internet? When it comes to learning many people have realized they are not going to acquire the language just by sitting in classrooms. But not everyone has the opportunity to walk out to the street and start practising with the passers-by. Most of us, who are learning English, don’t live in an English-speaking country. YOU HAVE TO LAUGH! « Diary of a Public School Teacher! I tend to misplace my reading glasses, a lot! My students are used to this and always join in to help me locate them. Recently, I could not find my prescription glasses, and wore my $1.00 glasses to work. My students commented on the fact that I had new glasses, and I told them these were my “cheap” glasses because I couldn’t find my good glasses. Three days later, I was searching for my glasses, and one of the students said, “Are you looking for the green ones?” And another one of my students responded, “No, she’s looking for the cheap ones!”

30 Books I'm Glad I Read Before 30 In various ways, these 30 books convey some of the philosophy of how Angel and I live our lives. I honestly credit a fraction of who I am today to each title. Thus, they have indirectly influenced much of what I write about on this site. A medley of both fiction and nonfiction, these great reads challenged my internal status quo, opening my mind to new ideas and opportunities, and together they gave me a basic framework for living, loving, learning and working successfully.