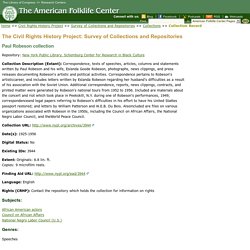 Schomburg Center for Research in Black Culture. Paul Robeson - Biography. Steve McQueen's Bio-Pic of Paul Robeson Will Help Restore the Reputation of the 20th Century's Most Talented Individual. Paul Robeson; Steve McQueen Last year, in an article about Paul Robeson for the Los Angeles Review of Books, I wrote: “Surely there is sufficient drama in Robeson’s remarkable life to merit a television miniseries or a Hollywood biopic, like recent films about Jackie Robinson and Cesar Chavez.” 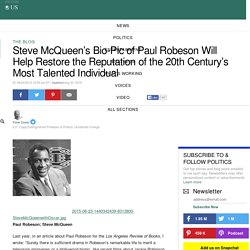 So, kudos to British director Steve McQueen, who just announced that his next film will be about Robeson. A Robeson bio-pic is long overdue and McQueen, whose last film 12 Years a Slave won an Oscar for best picture, is the right person to make it happen. Fittingly, McQueen revealed his plans last week at the Hidden Heroes event in New York, held by the Andrew Goodman Foundation, named after one of the civil rights workers killed in Mississippi in 1964. Harry Belafonte, who was Robeson’s protégé and friend, is working with McQueen on the project. Other public figures who challenged the political status quo — including Albert Einstein, W. His travels awakened his political consciousness. Paul Robeson: Here I Stand Documentary. Paul Robeson: Here I Stand — Direct Encounter with the Arts. 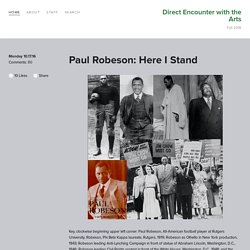 I, by Paul Robeson, Jr., published 2001. A significant portion of class filled in the context of Robeson’s life by discussing what you were asked about in the Daily: information about underlying reasons for the persecution of thousands of artists, teachers (and by the way, scientists such as Albert Einstein as well) by the US Congress during the McCarthy period; the Spanish Civil War; the Cold War; and more. Questions to consider: What do you find most compelling or surprising about Paul Robeson’s life? Any and all other comments are welcome. Paul Robeson - Athlete, Civil Rights Activist, Actor, Football Player, Singer, Lawyer. Paul Robeson was an acclaimed 20th-century performer known for productions like 'The Emperor Jones' and 'Othello.' He was also an international activist. 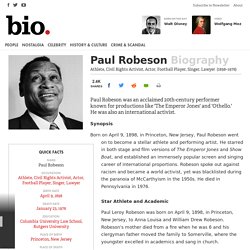 Synopsis Born on April 9, 1898, in Princeton, New Jersey, Paul Robeson went on to become a stellar athlete and performing artist. He starred in both stage and film versions of The Emperor Jones and Show Boat, and established an immensely popular screen and singing career of international proportions. Robeson spoke out against racism and became a world activist, yet was blacklisted during the paranoia of McCarthyism in the 1950s. Star Athlete and Academic. The Many Faces of Paul Robeson. Background How many people do you know who are athletes? 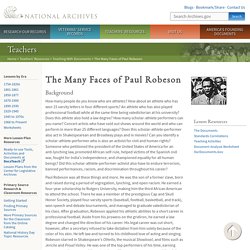 How about an athlete who has won 15 varsity letters in four different sports? An athlete who has also played professional football while at the same time being valedictorian at his university? Does this athlete also hold a law degree? How many scholar-athlete performers can you name? Paul Robeson was all these things and more. Robeson's travels opened his awareness to the universality of human suffering and oppression. While Robeson's activist role increased abroad, he met dissent and intimidation in the United States. To celebrate, Robeson gave his first New York concert in a decade at a sold-out Carnegie Hall. Resources Books. PAUL ROBESON, a brief biography.

Paul Robeson was a famous African-American athlete, singer, actor, and advocate for the civil rights of people around the world. 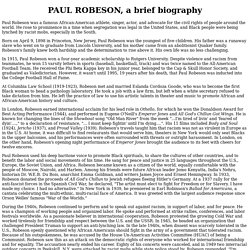 He rose to prominence in a time when segregation was legal in the United States, and Black people were being lynched by racist mobs, especially in the South. Born on April 9, 1898 in Princeton, New Jersey, Paul Robeson was the youngest of five children. His father was a runaway slave who went on to graduate from Lincoln University, and his mother came from an abolitionist Quaker family.

Robeson's family knew both hardship and the determination to rise above it. His own life was no less challenging. In 1915, Paul Robeson won a four-year academic scholarship to Rutgers University. At Columbia Law School (1919-1923), Robeson met and married Eslanda Cordoza Goode, who was to become the first Black woman to head a pathology laboratory.

What Paul Robeson Said. Paul Robeson, in 1942, leads Oakland shipyard workers in the singing of the National Anthem. 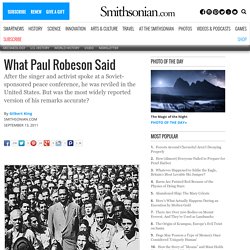 Photo: National Archives In April 1949, just as the Cold War was beginning to intensify, actor, singer and civil rights activist Paul Robeson traveled to France to attend the Soviet Union-sponsored Paris Peace Conference. After singing “Joe Hill,” the famous ballad about a Swedish-born union activist falsely accused and convicted of murder and executed in Utah in 1915, Robeson addressed the audience and began speaking extemporaneously, as he often did, about the lives of black people in the United States.

Robeson’s main point was that World War III was not inevitable, as many Americans did not want war with the Soviet Union. Before he took the stage, however, his speech had somehow already been transcribed and dispatched back to the United States by the Associated Press. Cap and Skull society members at Rutgers University, Class of 1919. Sources.