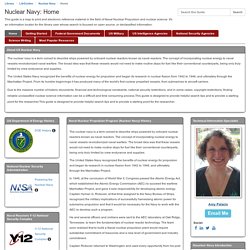 The concept of incorporating nuclear energy to naval vessels revolutionized naval warfare. The broad idea was that these vessels would not need to make routine stops for fuel like their conventional counterparts, being only truly limited by crew endurance and supplies. The United States Navy recognized the benefits of nuclear energy for propulsion and began its research in nuclear fission from 1942 to 1946, and ultimately through the Manhattan Project. In 1946, at the conclusion of World War II, Congress passed the Atomic Energy Act, which established the Atomic Energy Commission (AEC) to succeed the wartime Manhattan Project, and gave it sole responsibility for developing atomic energy. Captain Hyman G. He and several officers and civilians were sent to the AEC laboratory at Oak Ridge, Tennessee, to learn the fundamentals of nuclear reactor technology. Admiral Hyman G. Search for Lynchburg Jobs (Ashley/91)

If you've never searched for a job before then it might be a good idea to take some time to brainstorm careers or jobs you would like to pursue. 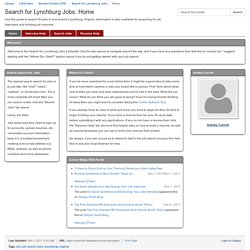 First, think about what sort of skills you have and work experiences you've had in the past. What did you enjoy? What do you think you are good at doing? If you're having trouble thinking of ideas then you might want to consider taking the Career Aptitude Test. Theatre and Performing Arts Resources (Casey/91) 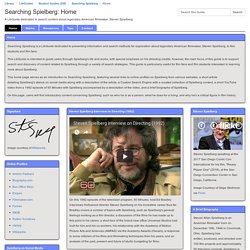 This LibGuide is intended to guide users through Spielberg's life and works, with special emphasis on his directing credits; however, the main focus of this guide is to support search and discovery of content related to Spielberg through a variety of search strategies. This guide is particularly useful for film fans and film students interested in learning more about Spielberg. On this page, users will find introductory content concerning Spielberg, such as who he is as a person, what he does for a living, and why he's a critical figure in film history. Autism (Jenna/91) The Journey From High School to College (Joanne/90) I created this Guide as a resource to help students and parents navigate the college application process. 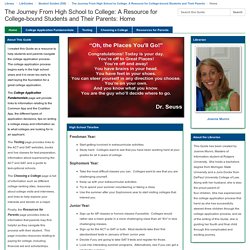 The college application process begins early in the high school years and it is never too early to start laying the foundation for a great college application. The College Application Fundamentals page will provide links to information relating to the Common App and the Coalition App, the different types of application decisions, tips on writing a college essay and information as to what colleges are looking for in an applicant. The Testing page provides links to the ACT and SAT websites, books and live classes for test preparation, information about superscoring the ACT and SAT, and a guide to test-optional schools. The Choosing a College page is full of information such as different college ranking sites, resources about college visits and interviews, and links to help explore your interests and decide on a major. 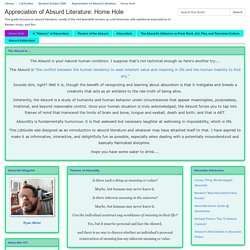 I suppose that's not technical enough so here's another try.... The Absurd is "the conflict between the human tendency to seek inherent value and meaning in life and the human inability to find any. " Sounds dire, right? Well it is, though the benefit of recognizing and learning about absurdism is that it instigates and breeds a creativity that acts as an antidote to the raw truth of being alive. Inherently, the Absurd is a study of humanity and human behavior under circumstances that appear meaningless, purposeless, irrational, and beyond reasonable control. Absurdity is fundamentally humorous: it is that awkward but necessary laughter at wallowing in impossibility, which is life. ACL Injury in Female Athletes (Samantha/91) Since the passage of Title IX in 1972, female participation in high school sports has skyrocketed. 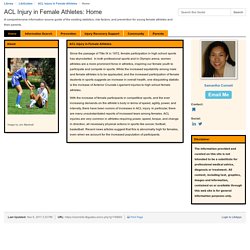 In both professional sports and in Olympic arena, women athletes are a more prominent force in athletics, inspiring our female youth to participate and compete in sports. While the increased equitability among male and female athletes is to be applauded, and the increased participation of female students in sports suggests an increase in overall health, one disquieting statistic is the increase of Anterior Cruciate Ligament injuries to high school female athletes. With the increase of female participants in competitive sports, and the ever increasing demands on the athlete’s body in terms of speed, agility, power, and intensity, there have been rumors of increases in ACL injury. In particular, there are many unsubstantiated reports of increased tears among females. Arabic Language Learning (Sara/90) While many textbooks and programs teach Modern Standard Arabic (MSA), in reality Arabic is spoken in widely varying dialects. 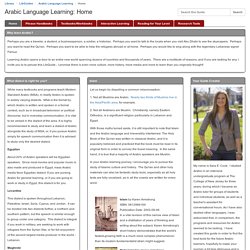 MSA is the format by which Arabic is written and spoken in a formal context, such as in broadcast television or political discourse, but in everyday communication, it is vital to be versed in the dialect of the area. It is highly recommended to study and learn a dialect of Arabic alongside the study of MSA; or, if you pursue Arabic simply for speech communication then it is advised to study only the desired dialect. Egyptian About 20% of Arabic speakers will be Egyptian speakers. Since most movies and popular music is also made and produced in Egypt, mass Arabic media favor Egyptian dialect. Levantine This dialect is spoken throughout Lebanon, Palestine, Israel, Syria, Cyprus, and Jordan. Maghrebi This dialect is spoken throughout North Africa, namely in Morocco, Algeria, Libya, and Tunisia. 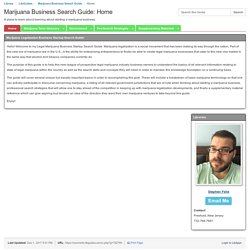 Welcome to my Legal Marijuana Business Startup Search Guide. Marijuana legalization is a social movement that has been making its way through the nation. Part of this new era of marijuana law in the U.S., is the ability for enterprising entrepreneurs to finally be able to create legal marijuana businesses that cater to this new vice market in the same way that alcohol and tobacco companies currently do. The purpose of this guide is to help this new league of prospective legal marijuana industry business owners to understand the basics of all relevant information relating to state of legal marijuana within the country as well as the search skills and concepts they will need in order to maintain this knowledge foundation on a continuing basis.

The guide will cover several unique but equally important topics in order to accomplishing this goal. Enjoy! Award Winning Books – Celebrating Diversity in YA (Susan/91) Follow the links below to find out about award winners for diverse YA literature this year and in previous years! 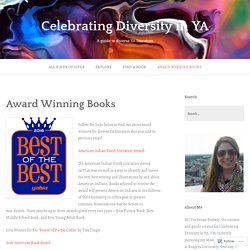 American Indian Youth Literature Award: The American Indian Youth Literature Award (AIYLA) was created as a way to identify and honor the very best writing and illustrations by and about American Indians. Books selected to receive the award will present American Indians in the fullness of their humanity in either past or present contexts. Nominations may be fiction or non-fiction. There may be up to three awards given every two years – Best Picture Book, Best Middle School Book, and Best Young Adult Book. 2016 Winner for YA: “House of Purple Cedar” by Tim Tingle Arab-American Book Award The purpose of the Awards is to inspire authors, educate readers and foster a respect and understanding of the Arab American culture. 2017 Winner for Children/YA: “The Treasure of Maria Mamoun” by Michelle Chalfoun The Coretta Scott King Book Awards.