We Have Not Yet Begun to Fight Tom Price. Just because the Senate voted to make Tom Price the nation’s top health care official doesn’t mean that the debates that flared over his nomination should end. 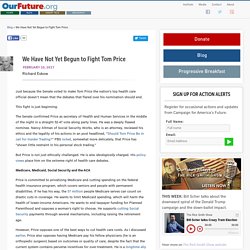 This fight is just beginning. The Senate confirmed Price as secretary of Health and Human Services in the middle of the night in a straight 52-47 vote along party lines. He was a deeply flawed nominee. Price: People using the ACA will be fine without it. President-elect Donald Trump's nominee for Secretary of Health and Human Services insisted Wednesday that the millions of Americans who currently rely on Obamacare for their health insurance would be fine if the law gets repealed without a replacement. 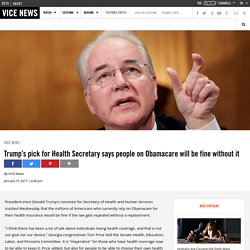 "I think there has been a lot of talk about individuals losing health coverage, and that is not our goal nor our desire," Georgia congressman Tom Price told the Senate Health, Education, Labor, and Pensions Committee. It is "imperative" for those who have health coverage now to be able to keep it, Price added, but also for people to be able to choose their own health insurance on the individual market. He did not provide details about how that arrangement would work. On Tuesday, the nonpartisan Congressional Budget Office released a report detailing how 18 million people could lose their health insurance within a year if the Affordable Care Act is repealed. Repeal and replace? Sen. Sen. Sen. Murray was not satisfied. Sen. Americans for Prosperity Applaud Tom Price: Signs No Climate Tax Pledge. Association of American Physicians and Surgeons.

Trump Hire is Hazardous to Your Health (And Not Just Your Medicare) Is Trump Trying to Distract the Nation with Tweets? Tuesday morning's dispatches from Camp Runamuck are led by the revelation that the camp's activities director found his telephone again and decided that it's never too early to start Making America Hate Again. 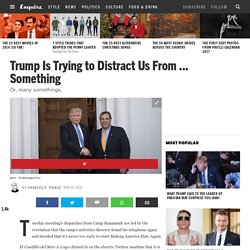 El Caudillo del Mar-A-Lago chimed in on the electric Twitter machine that it is his considered (if utterly) manic opinion that people who burn the American flag should be put in the hoosegow and/or stripped of their American citizenship. (In the Beyond, Clement Vallandigham perks up on his stool at the bar.) Unlike many of the president-elect's public episodes, this one seemed attached to no real developments in the news, unless he's been following the events at Hampshire College more closely than would seem wise for a guy who can't decide on a Secretary of State. Advertisement - Continue Reading Below Naturally, there was a loud (and largely bipartisan) outcry against this egregious attempt to put more bananas in our burgeoning banana republic. 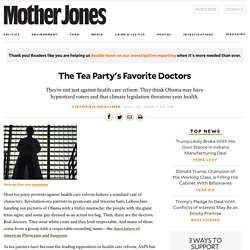 Revolution-era patriots in greatcoats and tricorne hats; LaRouchies handing out pictures of Obama with a Hitler mustache; the people with the giant fetus signs; and some guy dressed as an actual tea bag. Then, there are the doctors. Real doctors. They wear white coats and they look respectable. And many of them come from a group with a respectable-sounding name—the Association of American Physicians and Surgeons.

As tea partiers have become the leading opposition to health care reform, AAPS has lent credibility to their criticism of the emerging health care legislation. AAPS docs hopped Tea Party Express buses to protest the American Medical Association's annual meeting in Houston (the AMA endorsed the House bill), and staged a live reading of the legislation to highlight objectionable passages. This free-market fundamentalism has made the AAPS a natural ally for big corporations. Tom Price, Obamacare Critic, Is Trump’s Choice for Health Secretary.

While some Republicans have attacked the Affordable Care Act without proposing an alternative, Mr. 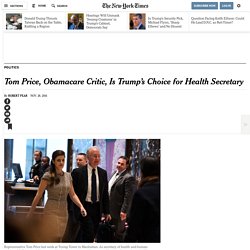 Price has introduced bills offering a detailed, comprehensive replacement plan in every Congress since 2009, when Democrats started work on the legislation. Many of his ideas are included in the “Better Way” agenda issued several months ago by House Republicans. In debate on the Affordable Care Act in 2009, Mr. Price railed against “a stifling and oppressive federal government,” a theme that pervades his politics. His most frequent objection to the law is that it interferes with the ability of patients and doctors to make medical decisions — a concern he will surely take with him if he wins Senate confirmation. Public Notes on 2007-HR618. On The Issues. House Republican Leader Price: ‘There’s Not One Woman’ Who Doesn’t Have Access To Birth Control. 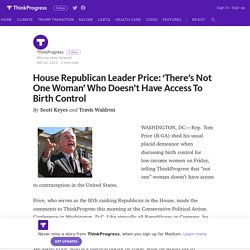 Tom Price (R-GA) shed his usual placid demeanor when discussing birth control for low-income women on Friday, telling ThinkProgress that “not one” woman doesn’t have access to contraception in the United States. Price, who serves as the fifth ranking Republican in the House, made the comments to ThinkProgress this morning at the Conservative Political Action Conference in Washington, D.C. Like virtually all Republicans in Congress, he opposes the recent Obama administration rule requiring employers and insurers to offer birth control at no cost. We asked Price, who is a medical doctor by trade, what he would say to low-income women who can’t afford birth control if it’s not covered by their insurance policies. PRICE: Bring me one woman who has been left behind. In fact, there are tens of millions of women in the United States who have struggled to afford or don’t have access to contraception. 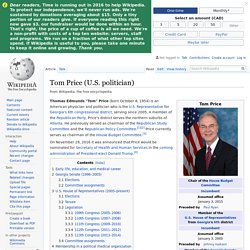 He grew up in Dearborn, where he attended Adams Jr. High and Dearborn High School. He ran an orthopedic clinic in Atlanta for 20 years before returning to Emory as assistant professor of orthopedic surgery.