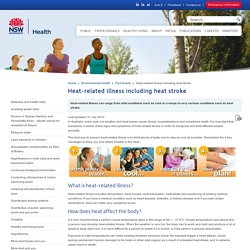 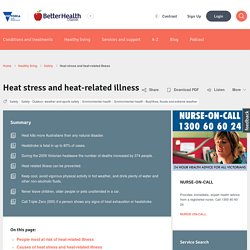 Those most at risk are older people, young children and people with a medical condition. Heat stress occurs when our body is unable to cool itself enough to maintain a healthy temperature. Normally, the body cools itself by sweating, but sometimes sweating isn’t enough and the body temperature keeps rising. Heat-related illness can range from mild conditions such as a rash or cramps to very serious conditions such as heatstroke, which can kill. Overexertion in hot weather, sun or bushfire exposure, and exercising or working in hot, poorly ventilated or confined areas can increase your risk of heat stress. What happens when you get heat stroke? - Douglas J. Casa. 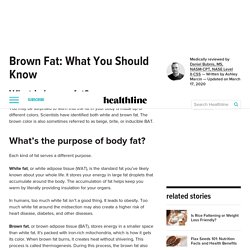 You may be surprised to learn that the fat in your body is made up of different colors. Scientists have identified both white and brown fat. The brown color is also sometimes referred to as beige, brite, or inducible BAT. What’s the purpose of body fat? Each kind of fat serves a different purpose. White fat, or white adipose tissue (WAT), is the standard fat you’ve likely known about your whole life. In humans, too much white fat isn’t a good thing. Brown fat, or brown adipose tissue (BAT), stores energy in a smaller space than white fat. Scientists used to believe that only babies had brown fat, which makes up about 5 percent of their total body mass. What researchers now know is that even adults have small reserves of brown fat. How to get brown fat In a way, brown fat is “good” fat.

All people have some “constitutive” brown fat, which is the kind you’re born with. There are certain drugs that can cause the browning of white fat. Turn the temperature down Eat more. What Is Peripheral Vasoconstriction? This physiological response has been mentioned so many times that I decided it needed its own specific post to plug into the Cold Water Swimming articles section. 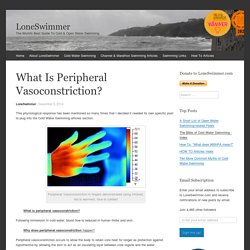 It also allows more oxygen to be delivered to important and oxygen-sensitive organs such as heart and brain. When does peripheral vasoconstriction happen? Immediately on entering cold water, it’s initiated by cold receptors (aka thermoreceptors, which are different kinds of heat or cold detecting nerves) in the skin. The head is not effected. Like this: Like Loading... Are children more prone to heat and cold stress than adults? WIND CHILL Science - Brainstorm AMHQ. Taking the plunge: does cold water swimming have health benefits? Between June and September, I swim in the sea as often as I can. 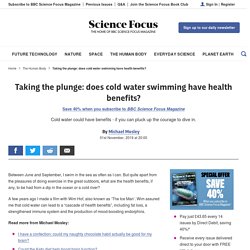 But quite apart from the pleasures of doing exercise in the great outdoors, what are the health benefits, if any, to be had from a dip in the ocean or a cold river? A few years ago I made a film with Wim Hof, also known as ‘The Ice Man’. Wim assured me that cold water can lead to a “cascade of health benefits”, including fat loss, a strengthened immune system and the production of mood-boosting endorphins. Read more from Michael Mosley: There is evidence that cold water encourages the development of brown fat (which burns calories) and clearly, if you do a lot of swimming in cold water then you are going to burn your way through a lot of calories.

As for boosting your immune system, the jury is still out. By chance, while the experiment was going on, there was an outbreak of flu and it turned out that those people having cold showers were 30 per cent less likely to take time off for sickness than those in a control group. Hypothermia , UPDATE - Everything You Need To Know - Dr. Nabil Ebraheim. Cold Weather Exercise and Safety - Warning Signs.

Winter weather means taking special precautions when you exercise outside. 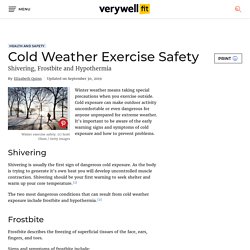 Cold exposure can make outdoor activity uncomfortable or even dangerous for anyone unprepared for extreme weather. It's important to be aware of the early warning signs and symptoms of cold exposure and how to prevent problems. Shivering Shivering is usually the first sign of dangerous cold exposure. As the body is trying to generate it's own heat you will develop uncontrolled muscle contraction. The two most dangerous conditions that can result from cold weather exposure include frostbite and hypothermia.2 Frostbite Frostbite describes the freezing of superficial tissues of the face, ears, fingers, and toes.