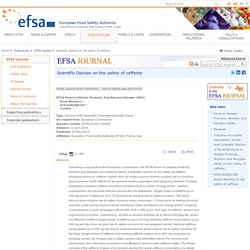 Possible interactions between caffeine and other common constituents of so-called “energy drinks”, alcohol, synephrine and physical exercise should also be addressed. News.nationalgeographic.com. A cup of coffee doesn't just provide a jolt for people in the morning. Bees may crave a buzz too. Scientists have found that some plants, like the coffee plant (Coffea), use caffeine to manipulate the memory of bees. The nectar in their flowers holds low levels of caffeine that pollinators find highly rewarding. (Read more about caffeine in National Geographic magazine) Bitter-tasting caffeine primarily arose in plants as a toxic defense against herbivores like garden slugs.

However, at low concentrations, caffeine appears to have a secondary advantage, attracting honeybees and enhancing their long-term memory, said lead author Geraldine Wright, a neuroscientist at Newcastle University in England, whose study was published online March 7 in the journal Science. "We show that caffeine—a compound whose ecological role is mainly to deter and poison herbivores—actually acts like a drug in an ecologically relevant context," Wright said. 14 Surprising Facts About Caffeine, Explained by Science.

For many of us, coffee is our best friend. 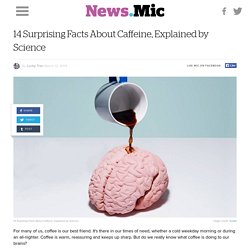 It's there in our times of need, whether a cold weekday morning or during an all-nighter. Coffee is warm, reassuring and keeps up sharp. But do we really know what coffee is doing to our brains? Fortunately science can tell us! The Scientifically Best Time to Drink Coffee. Caffeine Has Greater Effect On Men, And Starts Only Ten Minutes After Consumption. A study headed by researchers from the University of Barcelona (UB) shows that caffeine has a greater effect on men than women, and that these effects start just 10 minutes after it is drunk. 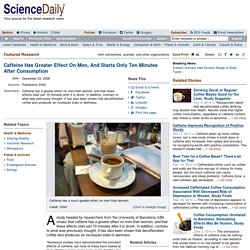 In addition, contrary to what was previously thought, it has also been shown that decaffeinated coffee also produces an increased state of alertness. “Numerous studies have demonstrated the stimulant effects of caffeine, but none of these have looked at their effects in terms of the consumer’s gender,” Ana Adan, lead author of the study and a researcher in the Psychiatry and Clinical Psychobiology Department of the UB, tells SINC.

Research into the effects of caffeine tends to be carried out using preparations in which the caffeine level is much higher than normal intake. In order to measure the effects, the scientists used a sample of 668 university students (238 male and 450 female) with an average age of 22 years. Coffee produces fast-acting effects Caffeine has an almost immediate effect. Caffeine Has Greater Effect On Men, And Starts Only Ten Minutes After Consumption. 13 Proven Health Benefits of Coffee (No. 1 is My Favorite) Coffee is actually very healthy. 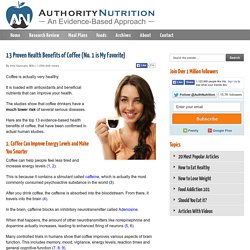 It is loaded with antioxidants and beneficial nutrients that can improve your health. The studies show that coffee drinkers have a much lower risk of several serious diseases. Here are the top 13 evidence-based health benefits of coffee, that have been confirmed in actual human studies. 1. Coffee Can Improve Energy Levels and Make You Smarter Coffee can help people feel less tired and increase energy levels (1, 2). This is because it contains a stimulant called caffeine, which is actually the most commonly consumed psychoactive substance in the world (3). After you drink coffee, the caffeine is absorbed into the bloodstream. In the brain, caffeine blocks an inhibitory neurotransmitter called Adenosine.

When that happens, the amount of other neurotransmitters like norepinephrine and dopamine actually increases, leading to enhanced firing of neurons (5, 6). Many controlled trials in humans show that coffee improves various aspects of brain function. 2. 3. 4. 5. Businessinsider. Coffee is one of the healthiest beverages on the planet. 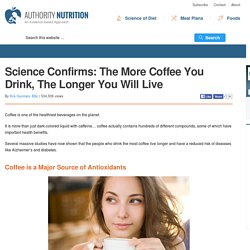 It is more than just dark-colored liquid with caffeine… coffee actually contains hundreds of different compounds, some of which have important health benefits. Several massive studies have now shown that the people who drink the most coffee live longer and have a reduced risk of diseases like Alzheimer’s and diabetes. Coffee is a Major Source of Antioxidants When hot water runs through the coffee grounds while brewing, the substances in the coffee beans mix with the water and become part of the drink. 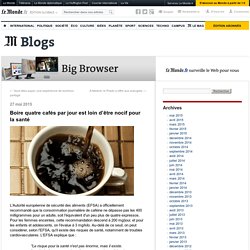