Coursera. An Intro to Interactive Programming in Python - Coursera/Rice. About this course: This two-part course is designed to help students with very little or no computing background learn the basics of building simple interactive applications. 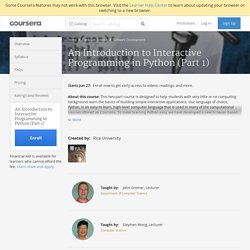 Our language of choice, Python, is an easy-to learn, high-level computer language that is used in many of the computational courses offered on Coursera. To make learning Python easy, we have developed a new browser-based programming environment that makes developing interactive applications in Python simple. These applications will involve windows whose contents are graphical and respond to buttons, the keyboard and the mouse. How an Upstart Company Might Profit From Free Courses - College 2.0. By Jeffrey R. Young Coursera has been operating for only a few months, but the company has already persuaded some of the world's best-known universities to offer free courses through its online platform.

Colleges that usually move at a glacial pace are rushing into deals with the upstart company. But what exactly have they signed up for? And if the courses are free, how will the company—and the universities involved—make money to sustain them? Some clues can be found in the contract the institutions signed. The contract reveals that even Coursera isn't yet sure how it will bring in revenue. Computer Science - Khan Academy. See also my Books pearltree under Python intro. Free 21st Century University - udacity cs101. CS101: One Year Later. A year ago Udacity launched with its first two courses: CS101: Building a Search Engine and CS373: Programming a Robotic Car. 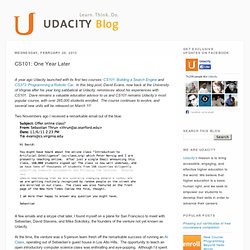 In this blog post, David Evans, now back at the University of Virginia after his year long sabbatical at Udacity, reminisces about his experiences with CS101. Dave remains a valuable education advisor to us and CS101 remains Udacity’s most popular course, with over 265,000 students enrolled. The course continues to evolve, and several new units will be released on March 11! Two Novembers ago I received a remarkable email out of the blue: A First for Udacity: Transfer Credit at a U.S. University for One of Its Courses - Technology. By Katherine Mangan. 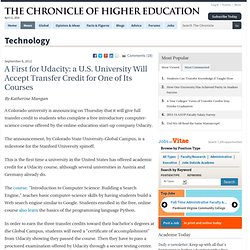 Professors without borders. Will online learning spell the end of universities? 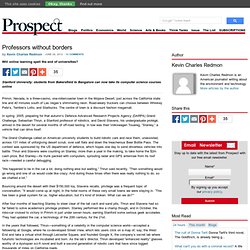 Stanford University: students from Bakersfield to Bangalore can now take its computer science courses online Primm, Nevada, is a three-casino, one-rollercoaster town in the Mojave Desert, just across the California state line and 40 minutes south of Las Vegas’s shimmering neon. Road-weary truckers can choose between Whiskey Pete’s, Terrible’s Lotto, and Starbucks. The centre of town is a discount fashion megamall. College Is Dead. Long Live College! 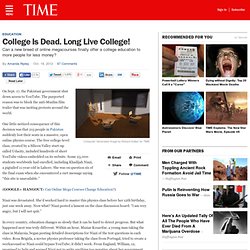 The purported reason was to block the anti-Muslim film trailer that was inciting protests around the world. One little-noticed consequence of this decision was that 215 people in Pakistan suddenly lost their seats in a massive, open online physics course. MOOCs, Large Courses Open to All, Topple Campus Walls. MOOCs: A College Education Online? Professor Leaves Teaching Post at Stanford, Hoping to Reach 500,000 at Online Start-Up - Technology. By Nick DeSantis A Stanford University professor who made headlines this past fall by teaching an online artificial-intelligence course to more than 160,000 students has left his teaching post at the university to seek an even bigger audience. 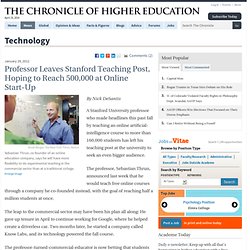 The professor, Sebastian Thrun, announced last week that he would teach free online courses through a company he co-founded instead, with the goal of reaching half a million students at once. The leap to the commercial sector may have been his plan all along: He gave up tenure in April to continue working for Google, where he helped create a driverless car. Two months later, he started a company called Know Labs, and its technology powered the fall course. The professor-turned-commercial-educator is now betting that students will try free courses that teach in-demand skills on flexible schedules—even if the courses are not affiliated with a prestigious university, and their work doesn't earn them a degree.

Mr. Mr. Starting in late February, Mr. Learn Python - Free Interactive Python Tutorial. Python & Pygame. About the publisher I have been working in IT since 1998, firstly in the industry and now as am lead teacher for Computing at an international school in Malaysia. 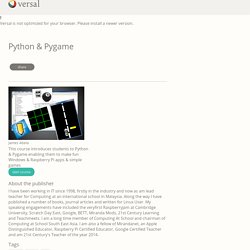 Along the way I have published a number of books, journal articles and written for Linux User. The Programming Historian 2. List of Videos for wxPython. List of Videos for Python. About M101P. So you want to be a programmer, huh? Here are 27 ways to learn online. Whether you are looking to switch careers and become a full-time programmer, want to try to build a website or app on the side, or are just looking to round out your skill set, learning to code has certainly been something a lot of people have started to do lately. 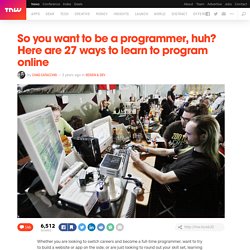 And while being a programmer might not be for everyone, there is a lot to be said about gaining a better, more educated view of how all those pixels get moved around all those screens. Before we delve into our list of learning resources sites, we wanted to share some advice from Marissa Louie, a self-taught product designer for Ness Computing. A former startup founder, Louie told TNW that the hardest part of being self-taught – whether it’s design, programming, or any other discipline is, “gathering the courage. The most important barrier is just to overcome your fears” (she also said having the ability to follow instructions helps as well). F**k it, we'll do it live! 1. 2. 3. 4. 5. 6. 7. 8. 9. 10. 11. 12. 13. Open Source Software. Open Source Software: Software Revolution Begins Tutorials On Python Programming. 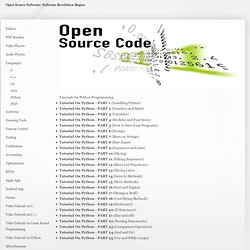 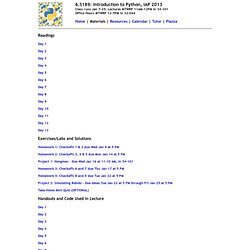 You don't need to turn it in, it is all for your benefit. You are, however, more than welcome to go over your solutions with the teaching staff, or get help if you are having trouble with any of the problems. Learn to Program: The Fundamentals. About the Course A computer program is a set of instructions for a computer to follow, just as a recipe is a set of instructions for a chef. Laptops, kitchen appliances, MP3 players, and many other electronic devices all run computer programs. Programs have been written to manipulate sound and video, write poetry, run banking systems, predict the weather, and analyze athletic performance.

This course is intended for people who have never seen a computer program. It will give you a better understanding of how computer applications work and teach you how to write your own applications. Recommended Background This course is intended for people who have never programmed before. Suggested Readings This online course is intended to be self-contained, but if you want additional reading material you will find that Practical Programming (2nd edition): An Introduction to Computer Science Using Python 3 matches the course material closely. Google Releases Open-Source Online-Education Software - Wired Campus. Google has taken what its officials call an “experimental first step” into online education, releasing open-source software called Course Builder in hopes that universities will use it to deliver free online courses.

The search giant says it is in talks with edX—a partnership among Harvard University, the Massachusetts Institute of Technology, and the University of California at Berkeley to offer free online courses—though officials declined to comment further. A post on Google’s research blog this week also cited nine universities interested in using the platform, including Stanford University.

“We’ve been in touch with a number of universities, and I think it’s a confusing time or an exciting time,” said Peter Norvig, Google’s director of research, in an interview with The Chronicle late Wednesday. “We’re close with Stanford—Coursera and Udacity both came out of Stanford. They’re working on their own open-source project, and they’re also interested in working with us.