50 Free Apps We're Most Thankful For. Essential. Essential or essentials may refer to: General usage[edit] 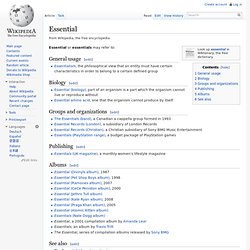 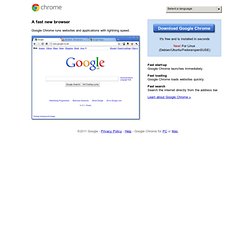 It's free and is installed in seconds For Windows XP, Vista and 7 New! For Mac OS X 10.5 or later, Intel only. Google Reader. Evernote. Dropbox. Password Manager. Online Appointment Scheduling. WorkFlowy - Organize your brain. All the software a geoscientist needs. For free! [Updated 09 July 2014: Previous (2012) version for reference here. 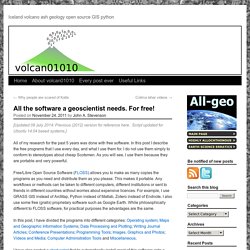 Script updated for Ubuntu 14.04 based systems.] 15 productivity tools to play with. The web is changing day in and day out at an incredibly fast pace. 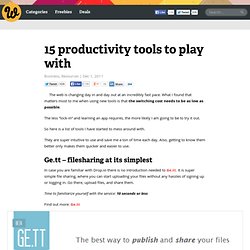 What I found that matters most to me when using new tools is that the switching cost needs to be as low as possible. The less “lock-in” and learning an app requires, the more likely I am going to be to try it out. So here is a list of tools I have started to mess around with. Clean up your social media permissions with one handy site. Time Management, Productivity, & Project Tracking Software (Mac/PC) 50 Free Apps We're Most Thankful For. Instant Web Highlighter. 5 Productivity Tools to Make Your Job Easier. Eric Siu is vice president of SEO at Evergreen Search Marketing, where he writes on topics such as minimum viable SEO. 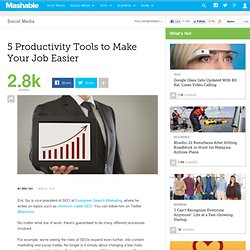 You can follow him on Twitter @ericosiu. No matter what line of work, there's guaranteed to be many different processes involved. For example, we're seeing the roles of SEOs expand even further, into content marketing and social media. No longer is it simply about changing a few meta tags and building a few links. On top of having your SEO basics down, different online marketing channels must converge and collaborate with one other.

IFTTT: If this, then that - Tasks. The 10 Best Productivity Apps of 2011. This has been a hectic year for nearly everyone I know. 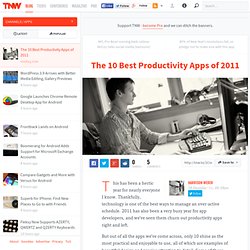 Thankfully, technology is one of the best ways to manage an over-active schedule. 2011 has also been a very busy year for app developers, and we’ve seen them churn out productivity apps right and left. But out of all the apps we’ve come across, only 10 shine as the most practical and enjoyable to use, all of which are examples of beautiful design and precise attention to detail. Some of these apps have been growing and improving since 2010, while others are completely brand new this year. Here’s TNW’s list of the 10 best productivity apps of 2011: Evernote Evernote is for anyone with a less than perfect memory who uses a computer, smartphone or tablet. Students use it to keep track of their class notes, teachers use it to store lesson plans, shoppers make shopping lists, travelers plan trips and bloggers write stories. . ➤ Evernote, Available for nearly everything Dropbox ➤ Dropbox, Available for Mac/PC/Linux and Mobile.

Insync: A Google Docs-Loving Dropbox Rival. If you’re the kind of person who uses Google Docs and Dropbox a lot, perhaps for business, as is becoming increasingly popular, then you will be interested to hear that Asian firm Insync has just announced that its cloud-based sharing platform is available for free. How it works The service provides cloud-based storage for files but it specialises in Google Docs, allows users to easily sync, update and share documents between others. Its user interface is a neat alternative to Google’s own interface which turns your virtual docs into ‘physical’ files that are housed on your PC or Mac, making them infinitely more accessible and easier to view than through the standard Web interface.

Shortly after loading, it will request access to your Google account, from which it creates a new ‘Dropbox’ folder which contains physical copies of all the files on your Google Docs account. Keep your files in sync for free. It is not uncommon to have two computers at work, four at home, and a server out on the wide open internet. 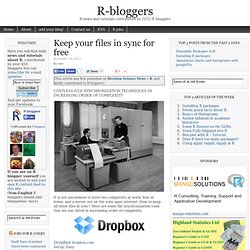 How to keep all these files in sync? Here are some file synchronization tools that we use, listed in increasing order of complexity. Dropbox dropbox.com Setup: Easy. OS: Windows, Linux, or Mac We use this at Decision Science News, but only for some of our files. New users get 2GB of storage for free (or 2.25 GB if they use this link). Unison www.cis.upenn.edu/~bcpierce/unison Setup: Moderate for USB drive use, hard for network use (requires installing server software) OS: Windows, Linux, or Mac We sync about 10GB of files with unison. Online file sharing. 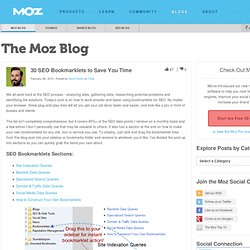 Today's post is on how to work smarter and faster using bookmarklets for SEO. No matter your browser, these plug-and-play links will let you get your job done faster and easier, and look like a pro in front of bosses and clients. 5 URL Expanders to Help You Avoid Spammy Links. When URL shorteners first came about, spammers used them to disguise malicious links. Now that social networks like Twitter have propelled shortened URLs into widespread use, people are more comfortable clicking through.

However, there are still occasions in which you confront possibly dubious links. Rather than debate the pros and cons of clicking (We’re guessing that ZOMG! Video is worth turning your PC into a spambot), we recommend bookmarking a URL checker to find out just where that enticing link points you click through. We’ve found five URL expansion services that will give you some peace-of-mind when browsing. Snagit, screen capture. Context is everything. Recording a video lets the person on the other end actually hear your voice.

So the next time a webpage, PDF, or video edit is sent to you for feedback, consider dropping the red pen and record a video instead.