A new Kinect is on the way. Build your own gaming controllers with this DIY kit. If you've ever wondered just what it would take to build your own motion controller, you're in luck. 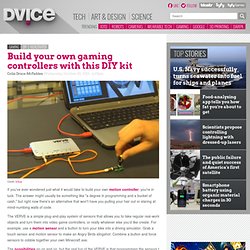 The answer might usually be something like "a degree in programming and a bucket of cash," but right now there's an alternative that won't have you pulling your hair out or staring at mind-numbing walls of code. The VERVE is a simple plug-and-play system of sensors that allows you to take regular real-world objects and turn them into video game controllers, or really whatever else you'd like create. For example, use a motion sensor and a button to turn your bike into a driving simulator. Grab a touch sensor and motion sensor to make an Angry Birds slingshot. Combine a button and force sensors to cobble together your own Minecraft axe.

The possibilities go on and on, but the real fun of the VERVE is that programming the sensors to specific actions in your games is as simple as a couple clicks of your mouse. Via Kickstarter. 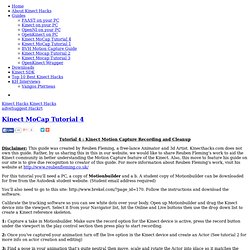 Kinecthacks.com does not own this guide. Rather, by us sharing this in this in our website, we would like to share Reuben Fleming’s work to aid the Kinect community in better understanding the Motion Capture feature of the Kinect. Also, this move to feature his guide on our site is to give due recognition to creator of this guide. Codes - GENERATIVE GESTALTUNG. 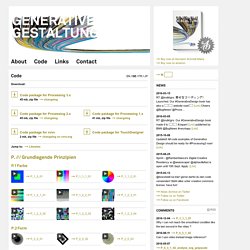 Launched: Our #GenerativeDesign book has also a 🇯🇵 website now! 👍 [Link] Cheers @BugNews! @Proce… 2016-03-05RT @bndktgrs: Our #GenerativeDesign book made it to 🇯🇵 #Japan! [Link] published by BNN @BugNews #veryhapy [Link] 2015-10-08Updated! All code examples of Generative Design should be ready for #Processing3 now! Kinect Developers. Hi, If you are visiting this page so you tried to open KinectDevs.com. 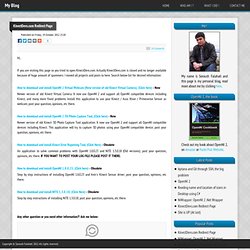 Actually KinectDevs.com is closed and no longer available because of huge amount of spammers. I moved all projects and posts to here. Coding4Fun Kinect Projects. iPi Soft. Quick Start Guide for Dual Kinect Sensor Configuration - iPiSoft Wiki. 'Fabricate Yourself' by Karl D.D. Willis (@KarlDD) allows visitors to print 3d models of themselves #openFrameworks #Kinect. Fabricate Yourself is a project by Karl D.D. 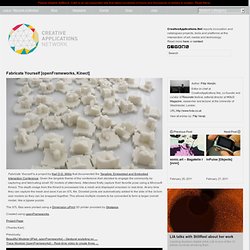 Willis that documented the Tangible, Embedded and Embodied Interaction Conference. Given the tangible theme of the conference Karl decided to engage the community by capturing and fabricating small 3D models of attendees. Search Results for “kinect”: SourceForge. Kinect Paint. Kinect. Kinect (codenamed in development as Project Natal) is a line of motion sensing input devices by Microsoft for Xbox 360 and Xbox One video game consoles and Windows PCs. 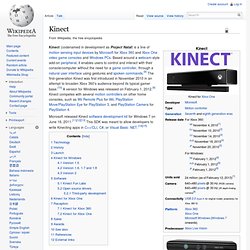 Based around a webcam-style add-on peripheral, it enables users to control and interact with their console/computer without the need for a game controller, through a natural user interface using gestures and spoken commands.[9] The first-generation Kinect was first introduced in November 2010 in an attempt to broaden Xbox 360's audience beyond its typical gamer base.[10] A version for Windows was released on February 1, 2012.[6] Kinect competes with several motion controllers on other home consoles, such as Wii Remote Plus for Wii, PlayStation Move/PlayStation Eye for PlayStation 3, and PlayStation Camera for PlayStation 4.

Technology Kinect sensor[9] is a horizontal bar connected to a small base with a motorized pivot and is designed to be positioned lengthwise above or below the video display. History Launch. Kinect. Un article de Wikipédia, l'encyclopédie libre. 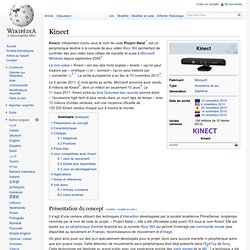 DaVinci Goes Touchless With XBox Kinect. The launch of Xbox Kinect has caused much excitement in the open source community. 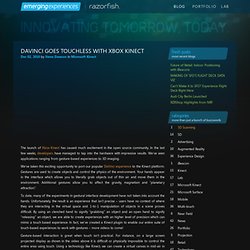 In the last few weeks, developers have managed to tap into the hardware with impressive results. We’ve seen applications ranging from gesture-based experiences to 3D imaging. We’ve taken this exciting opportunity to port our popular DaVinci experience to the Kinect platform. Gestures are used to create objects and control the physics of the environment. Your hands appear in the interface which allows you to literally grab objects out of thin air and move them in the environment. To date, many of the experiments in gestural interface development have not taken into account the hands. Gesture-based interaction is great when touch isn’t practical. Coding4Fun. Kinect for Windows Quickstart Series. 7 minutes, 55 seconds 13 minutes, 36 seconds 14 minutes, 42 seconds 19 minutes, 2 seconds 15 minutes, 49 seconds 14 minutes, 51 seconds. 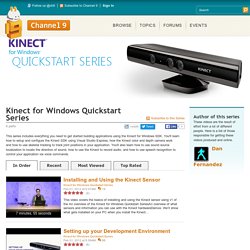 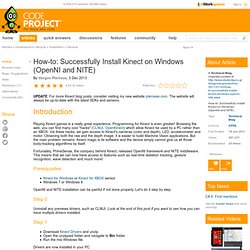 The website will always be up-to-date with the latest SDKs and sensors. Microsoft Kinect for Xbox 360 - Xbox: Project Natal Blog. Puppet Parade by Emily Gobeille and Theo Watson of @design_io #openframeworks. Puppet Parade is an interactive installation by Emily Gobeille and Theo Watson of Design I/O that allows children to use their arms to puppeteer larger than life creatures projected on the wall in front of them. This dual interactive setup allows children to perform alongside the puppets, blurring the line between the ‘audience’ and the puppeteers and creating an endlessly playful dialogue between the children in the space and the children puppeteering the creatures.

The setup consists of a stage where two puppeteers can control puppets displayed on a large interactive screen. The audience can stand in front of the screen and interact with the puppets directly, making food for them to eat which transforms their appearance or just engaging in a fun dialogue with the puppet, the performer and themselves. Blender. Kai Kostack's Home. NI Mate. NI mate Documentation (last update 22.1.2012) General Delicode NI mate is a program that uses OpenNI standard compliant devices such as the Microsoft Kinect, the ASUS Xtion and the PrimeSense Carmine to track body movement, converting this motion data into standard OSC or MIDI messages that can be received in any client program.

Installation On Windows If you have previously installed SensorKinect, OpenNI or NITE, it's strongly recommended that you either uninstall all of them or update them to the latest versions before installing Delicode NI mate. If you have any other device drivers (like the Kinect for Windows SDK) installed other than SensorKinect you must uninstall these before installing Delicode NI mate.

Thanks to the folks at PrimeSense libraries are now available for skeleton tracking and gesture recognition. UPDATE: Check here if you've gotten NITE working and want to try using the kinect as a Minority Report style mouse.UPDATE:I've added a description of how to track multiple hands under the Sample-PointViewer description. Here's how I got things working in gentoo: (15)Repeat step 14 for Sample-Scene.xml and Sample-Tracking.xml(16)Open Sample-User.xml and replace the existing MapOutputMode line with the line below. NOTE: this is case sensitive! (17)Repeat step 16 for Sample-Scene.xml and Sample-Tracking.xml(18)niLicense PrimeSense 0KOIk2JeIBYClPWVnMoRKn5cdY4=(19)cd ~/kinect/NITE/Nite-1.3.0.17/(20)sudo . Now finally you should be sitting in a directory with all the sample binaries that you can play with. Sample-TrackPad:This app will track your hand and show it's relative position on a grid.

You should also get some debug output in your console: Kinect OpenNI-NITE ofxOpenNI Skeleton with openFrameworks on Linux. At last, after some setting up we got the Nite library accesible from openFrameworks on linux thanxs to the work of the independent community. To make it work, we followed closely these instructions to install the OpenNI libs, Primesense's Sensor drivers, and the NITE library. We got some of the "InitFromXml failed: Can't create any node of the requested type!

" error reported by other, but it was solved after rebooting, deleting the three folders (OpenNI, Sensors and NITE), and repeating everithing. We used as wrapper Alohas's "ofxONI_notYetAddon" with some changes. We also had to change the name of several "Status" variables to "theStatus" on the XnStatus.h file as follows: Using Kinect + OpenNI to Embody an Avatar in Second Life. Download the software to connect the Microsoft Kinect to Second Life.

At the MxR Lab at the University of Southern California Institute for Creative Technologies we are developing methods of recognizing social gestures in order to explore the transference of emotion and gesture between a virtual world and the real world. OctoMap - 3D occupancy mapping. Openni_kinect/kinect_accuracy. This page discusses both the precision and the accuracy of the Kinect sensor. If you are not sure what the difference between precision and accuracy is, check out this Wikipedia page.

Precision of the Kinect sensor Because the Kinect is essentially a stereo camera, the expected error on its depth measurements is proportional to the distance squared. The experimental data shown in the graph below confirm the expected error model. The graph was obtained by pointing the Kinect at a planar surface, fitting a plane (using RANSAC) through the measured pointcloud, and checking the distance of the points in the pointcloud to that plane. Openni/Contests/ROS 3D/RGBD-6D-SLAM. Description: The Kinect is used to generate a colored 3D model of an object or a complete room.

Continue reading Tuukka Takala writes about his immersive interface project – it won a prize at the 2013 Symposium on 3D User Interfaces. Continue reading. Bloop: Blender Motion Capture with Kinect. The Blender Loop Station (Bloop) is a rapid performance animation tool. Processing - V // Pixelnerve. I’ve made an application as an example for this thread on how to compute/evaluate a Cubic Bézier Curve using a Geometry Shader. The formula is pretty straightforward as described by this wikipedia article (look for Cubic Bézier Curve). I will not go over the bézier math or theory. Kinect and Processing. This is all very preliminary, but here is a first pass as a Processing Kinect library: