A Right to be protected....

Protecting Human Rights Activists? There’s An App For That (Video) Well-equipped smartphones allow activists to immediately document human rights abuses in real time, but the information can be vulnerable if a device falls into the wrong hands. 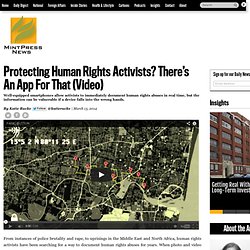 From instances of police brutality and rape, to uprisings in the Middle East and North Africa, human rights activists have been searching for a way to document human rights abuses for years. When photo and video capabilities were added to mobile phones, activists thought they had finally secured the means to document such abuse. “New technologies – such as social media and mobile Internet – have fundamentally changed how we shed light on and respond to human rights abuses,” said Tanya O’Carroll, technology and human rights project officer for Amnesty International. “Today, almost anyone with a mobile phone can be a human rights monitor and challenge the abuse of power by capturing and sharing documentation of abuses as they happen.” least temporarily. location but a live video recording of what is happening. Defending Human Rights Worldwide. 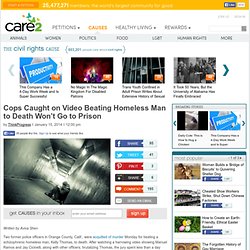 After watching a harrowing video showing Manuel Ramos and Jay Cicinelli, along with other officers, brutalizing Thomas, the jury spent less than a day deliberating to find the two men not guilty. In July 2011, the Fullerton cops came upon the 37-year-old schizophrenic taking some letters out of a trashcan and started beating him with a taser and a baton.

The entire encounter was caught on a nearby security camera. The recording shows Ramos putting on a pair of latex gloves and telling Thomas: “See these fists? The defense attorneys argued Thomas had fought back, forcing the officers’ to subdue him, and that he died not of his injuries but of a heart condition exacerbated by long-term drug use. The verdict has already sparked national outrage, but Ramos’ and Cicinelli’s fates are hardly unusual. 'Riot is the language of the unheard' What MLK would have said about the London riots. Speaking just weeks before his assassination, which catalyzed rioting across America, Martin Luther King offered his thoughts on the type of civil unrest that devolves into violence and looting, saying: It is not enough for me to stand before you tonight and condemn riots. 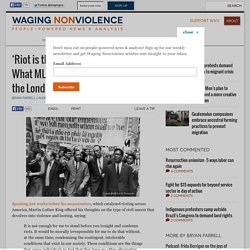 It would be morally irresponsible for me to do that without, at the same time, condemning the contingent, intolerable conditions that exist in our society. These conditions are the things that cause individuals to feel that they have no other alternative than to engage in violent rebellions to get attention. And I must say tonight that a riot is the language of the unheard. If there’s any question—in this time of deep spending cuts and high unemployment—as to whether the same can be said about the riots plaguing parts of London these past four days, one need only look at where they are occurring. Egyptian activist Mosa’ab Elshamy made that point in a tweet that gained a lot of attention: Rand Paul: Baltimore Violence Is About 'Lack Of Fathers' And Morals (AUDIO) "I came through the train on Baltimore (sic) last night, I'm glad the train didn't stop," he said, laughing, during an interview with conservative radio host Laura Ingraham. 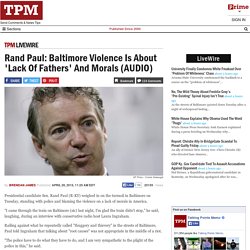 Railing against what he repeatedly called "thuggery and thievery" in the streets of Baltimore, Paul told Ingraham that talking about "root causes" was not appropriate in the middle of a riot. "The police have to do what they have to do, and I am very sympathetic to the plight of the police in this," he said. As for root causes, Paul listed some ideas of his own. "There are so many things we can talk about," the senator said, "the breakdown of the family structure, the lack of fathers, the lack of a moral code in our society.

" He added that "this isn't just a racial thing. " Paul, who has branded himself as an advocate of criminal justice reform, also said justice must come from an investigation of the case of Freddie Gray, a black man who died of a spinal injury while in the custody of Baltimore police.