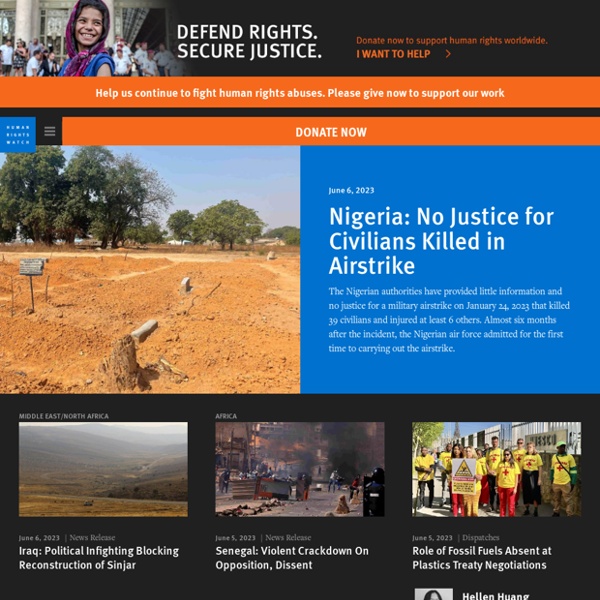 Detention Action Detention Action is working with people in detention, and those recently released, to share their experiences of detention, and to tell the story of why they were detained. Abdul is a Rohingya from Burma. He is stateless, so cannot return to Burma or Bangladesh. Despite this, when he claimed asylum he was placed on the Detained Fast Track. I was detained from August 2010 until the beginning of November 2012 and have only just been granted bail. 150 Free Textbooks: A Meta Collection Free textbooks (aka open textbooks) written by knowledgable scholars are a relatively new phenomenon. Below, find a meta list of 200 Free Textbooks, and check back often for new additions. Also see our online collection, 1,700 Free Online Courses from Top Universities. Art History A Textbook of the History of Painting by John Charles Van Dyke, Rutgers

8 Great Heroes of Human Rights In 539 B.C., the armies of Cyrus the Great conquered the city of Babylon. But rather than rape and pillage, Cyrus freed the slaves, declared freedom of religion and established racial equality. These and other decrees were recorded in cuneiform on a baked-clay cylinder now known as the Cyrus Cylinder. It is generally considered the world’s first charter of human rights. In the millennia following, there have been many who wanted to oppress, and a few like Cyrus the Great, who strove against tyranny in the name of human rights. ALEC – American Legislative Exchange Council More than 40 years ago, a small group of state legislators and conservative policy advocates met in Chicago to implement a vision: A nonpartisan membership association for conservative state lawmakers who shared a common belief in limited government, free markets, federalism, and individual liberty. Their vision and initiative resulted in the creation of a voluntary membership association for people who believed that government closest to the people was fundamentally more effective, more just, and a better guarantor of freedom than the distant, bloated federal government in Washington, D.C. At that meeting, in September 1973, state legislators, including then Illinois State Rep. Henry Hyde, conservative activist Paul Weyrich, and Lou Barnett, a veteran of then Gov. Ronald Reagan’s 1968 presidential campaign, together with a handful of others, launched the American Legislative Exchange Council.

Blue Feed, Red Feed What is this? Recent posts from sources where the majority of shared articles aligned “very liberal” (blue, on the left) and “very conservative” (red, on the right) in a large Facebook study. In 2015, the journal Science published a research paper by Facebook scientists (Bakshy, Eytan; Messing, Solomon; Adamic, Lada, 2015, “Replication Data for: Exposure to Ideologically Diverse News and Opinion on Facebook”, Harvard Dataverse, V2) which looked at how a subset of the social network’s users reacted to the news appearing in their feeds.

'Honour'-based violence Heshu Yunes ‘Honour’-based violence and ‘honour’ killings are a form of violence against women which currently occur predominantly amongst populations from the Middle East and South Asia, although they may occur in other areas, and historically have been recorded in Southern Europe. ‘Honour’ works to restrict women’s autonomy, particularly sexual autonomy within male-dominated societies which place a high value on women’s chastity. Within ‘honour’ crimes, families may collaborate to commit violence against a relative who is thought to have violated the restrictions around female behaviour.

United Nations Universal Declaration of Human Rights Summary: Youth For Human Rights Video Simplified VersionThis simplified version of the 30 Articles of the Universal Declaration of Human Rights has been created especially for young people. We Are All Born Free & Equal. We are all born free. Humanity Healing International is a humanitarian, nondenominational, nonpolitical organization promoting Spiritual Activism as a means to foster Healing for communities with little or no Hope. Once social change begins, it cannot be reversed. You cannot un-educate the person who has learned to read. You cannot humiliate the person who feels pride. You cannot oppress the people who are not afraid anymore. ~Cesar Chavez Institute for Advanced Studies In Culture: Publications - The Hedgehog Review Current Issue Summer 2017 (19.2) The accelerating urbanization of the world can be viewed as either the hope or the bane of our global future. Yet at a time when more than half of the world’s population inhabits cities and so much thought and study have been devoted to the challenges and possibilities of urban life, surprisingly little attention is paid to the crucial purpose and meaning of cities. Recovering the cultural dimension in thinking about the future of our cities may be the best way to make them the solution and not the problem.

Human Rights Human rights are simply basic rights that every human is entitled to regardless of their nationality, age, ethnic origin, gender, religion or language. The Universal Declaration of Human Rights (UDHR) was adopted by the United Nations General Assembly in Paris on 10 December 1948. The UDHR is the basis for a world built on freedom, justice and peace. Human rights It is the duty of every country to promote and protect the human rights and freedom of its people regardless of the country's political, social or economic or cultural system. Patents on Life Dolly sheep protest against patents on life at office for European patents. Patents are government guarantees that provide an inventor with exclusive rights to use, sell or manufacture an invention for a set period of time. A patent is usually granted for 20 years. Patents should be granted only to human inventions, not discoveries.