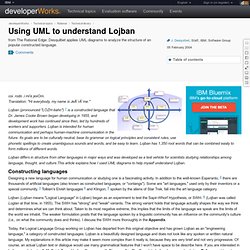 Translation: "Hi everybody, my name is JeÂ´rÃ´me. " Lojban (pronounced "LOZH-bahn") 1 is a constructed language that Dr. James Cooke Brown began developing in 1955, and development work has continued since then, led by hundreds of workers and supporters. Lojban is intended for human communication and perhaps human-machine communication in the future. Its goals are to be culturally neutral, base its grammar on logical principles and consistent rules, use phonetic spellings to create unambiguous sounds and words, and be easy to learn. Lojban differs in structure from other languages in major ways and was developed as a test vehicle for scientists studying relationships among language, thought, and culture.This article explains how I used UML diagrams to help myself understand Lojban. Constructing languages Designing a new language for human communication or studying one is a fascinating activity. Back to top. Python parrot sketch.

Lojban home. Links to Useful Lojban Resources. Learning (en) - le uitki. There are various ways of learning Lojban unique to the individual learning it, but to help you get started here are some suggestions. 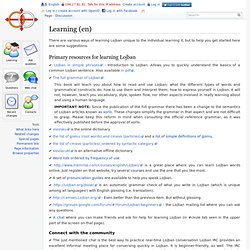 Lojban Beginners - Google Groupes. IRC Bots - le uitki. You might think all ~120 logged on users of #lojban are watching you and/or participating in the conversation. 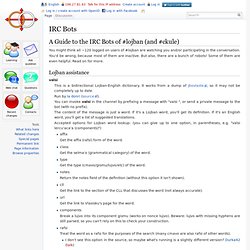 You'd be wrong, because most of them are inactive. But also, there are a bunch of robots! Some of them are even helpful. Lojbo ckule - 01-01. The Lojban Reference Grammar. Learning materials (full list) - le uitki. Books Pre-introductory is Jay's Jay's Lojban Brochure. 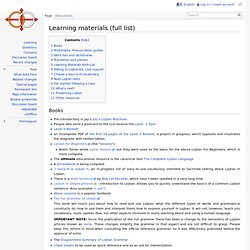 People who send a postcard to the LLG receive the Level -1 flyer. Level 0 Booklet an incomplete PDF of the first 19 pages of the Level 0 Booklet, a project in progress, which typesets and illustrates the diagrams with nested tables. Lojban For Beginners (the "lessons"). Robin Turner wrote some lessons, but they were used as the basis for the above Lojban For Beginners, which is more complete. This book will teach you about how to read and use Lojban; what the different types of words and grammatical constructs do, how to use them and interpret them; how to express yourself in Lojban.

IMPORTANT NOTE: Since the publication of the full grammar there has been a change to the semantics of Lojban articles known as xorlo. The Diagrammed Summary of Lojban Grammarcheat sheets to be used as quick reference and as an aid for memorization. Lojban/Attitudinals - Wikibooks, open books for an open world. Attitudinals are markers of attitude or emotion, modifying the word (brivla, cmavo, cmene, sumti, or tanru) directly before it. 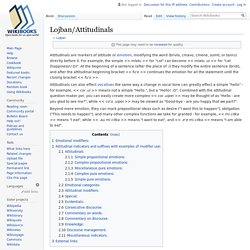 For example, the simple << mlatu >> for "cat" can become << mlatu .ui >> for "cat (happiness! /:D)". At the beginning of a sentence (after the place of .i) they modify the entire sentence (bridi), and after the attitudinal beginning bracket << fu'e >> continues the emotion for all the statement until the closing bracket << fu'o >>. Attitudinals can also effect vocatives the same way a change in vocal tone can greatly effect a simple "hello" - for example, << coi .ui >> means not a simple "Hello.

Lojban courses. Loglish. Loglish Ben Goertzel The goal of this brief document is to describe a new language, which I call Loglish. 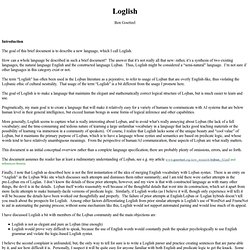 How can a whole language be described in such a brief document? The answer that it’s not really all that new: rather, it’s a synthesis of two existing languages, the natural language English and the constructed language Lojban. Thus, Loglish might be considered a “semi-natural” language. The term “Loglish” has often been used in the Lojban literature as a pejorative, to refer to usage of Lojban that are overly English-like, thus violating the Lojbanic ethic of cultural neutrality. The goal of Loglish is to make a language that maintains the elegant and mathematically correct logical structure of Lojban, but is much easier to learn and use. This document is an initial conceptual overview rather than a complete language specification; there are probably plenty of omissions, errors, and so forth.

The basic definition of Loglish is as follows: Also, negative words are not allowed (e.g. Vs.