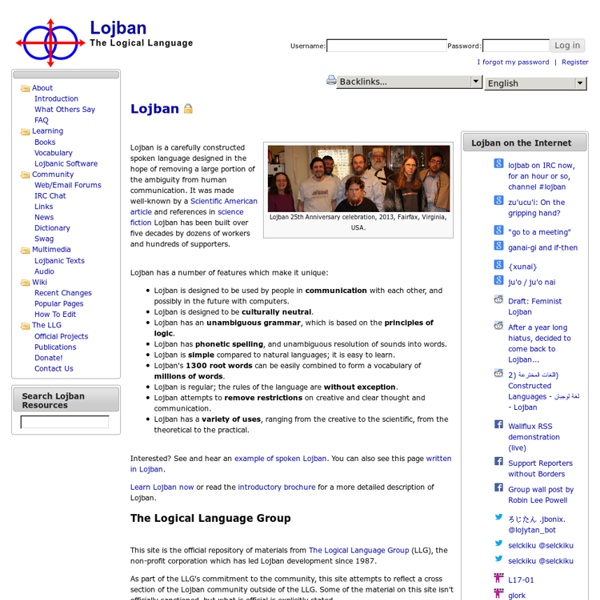 About the Klingon Language Here you can find information about the sound and look of Klingon, and even learn a few useful phrases in the Warrior's Tongue. We also maintain a list of "new" Klingon words. These are words that were created by the language's inventor, Dr Marc Okrand, but not (yet) published in easily-accessible works (such as his books). Rather, they have appeared in online messages from him, or the pages of HolQeD , the KLI's scholarly journal. The Klingon language is something truly unique. Klingon was invented by Marc Okrand, for use in some of the Star Trek movies. Back to KLI Home Page

2 new translations (vamana, via ancient ufo dot org) "97. To make a prairie it takes a clover and one bee,-- One clover, and a bee, And revery. The revery alone will do If bees are few." Emily Dickinson ('The act-of-creating a grass-field if-&-only-if there exists/ at-least-one fourfold/ flowering-plant, at-least-one bee,// & at-least-one state-of conscious-dreaming./ The latter suffices under-the-conditions-of beelessness.') "It's a curse, the writing impulse, if it gets you early, and if it doesn't get you early it isn't a writing impulse." My good friend the Rose It’s little enough to win And my good friend the Rose This morning said to me With sunrise I was born To baptize in its tears I followed into bloom Knew joy & love’s delight In the full rays of the sun Then twilight made me close At dusk my time was done Awhile I was so fair Among the rest most fair Of those the garden grew A day ago we loved And I will taste its dust Forevermore & soon

a lojban rap album released June 21, 2015 With its 16 original tracks and its unique Lojban lyrics, ZA'O, the first Lojban album of all time, ventures to explore the many possibilities of Lojban rap music -- previously largely uncharted territory. The themes on this album range from despair to hope, from depression to joy, from anxiety and fear to the one true love. One track even features a verse written in Toki Pona, a little something from me for the Toki Pona fans out there. I'm no professional - obviously. It's too early to talk about it, but with enough of your support I might make another album at some point. Lastly, I'd like to thank everyone who encouraged me to make this album. I hope you'll find a song or two on here that you like. ~~Djemynai

Learning another language for geeks and gamers Learning a second language is something I think everyone should do. Which is all nice and good to say, but I have to be honest and admit that I suck at learning languages. It isn't that I can't learn a language or that it it too hard, I just get bored with it. I barely made it through 4 semesters of Spanish in college, mostly because I didn't want to study. I sincerely want to learn a new language, but I just have a hard time staying focused on it. Being a geek I just can't help but feel drawn to the fictional languages that I encounter in movies, TV shows and books in a way that I'm not with real world languages. During my studies of Irish and German I stumbled upon a great site called Omniglot that contains information about every language I've ever heard of, as well as many more I never knew existed. Klingon , Romulan , Atlantean , Tengwar , and, my favorite, Kryptonian are just a few of the fictional languages on the site. Atlantean is another language you may find useful.

the hexadecimalist heresy A short history of blogs. A curious episode in the recent history of Lojban was the Hexadecimalist Heresy. A certain Lojbanist, observing that Lojban had single-syllable words for numbers up to fifteen, maintained that the default number base of Lojban must be Base-16 (i.e. counting ...8, 9, A=10, B=11, C=12, D=13, E=14, F=15, "10"=16 in conventional notation). This created an immense & vituperative controversy, only ending when the arch-hexidecimalist withdrew from the community.