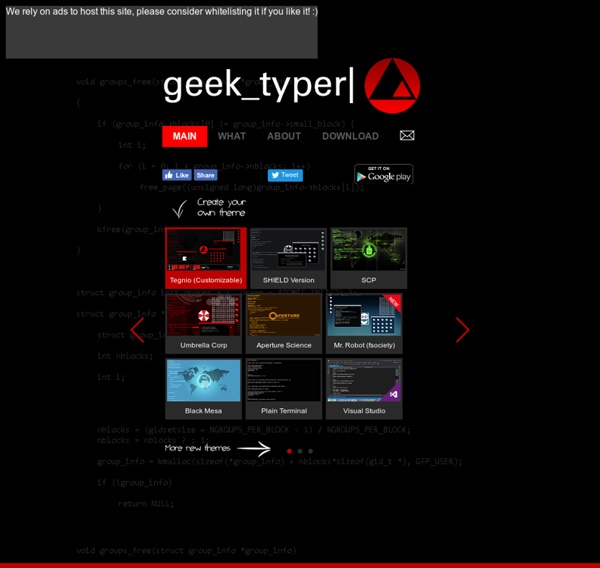 The 100 Best, Most Interesting Blogs and Websites of 2014 Editor’s note: 2015’s list of the best, most interesting websites has arrived! The video above is a sampling from that list. Welcome to the most awesome blog post you’re going to see all year. Yep, it’s the third installment in the super-popular annual series in which I document the sites I think you’ll want to spend a lot of time on in the coming year (below you’ll find a few highlights from recent years in case you missed out). I have one major rule: a site can only appear on this list once, so there are never any duplicates. Every year this list is 100% fresh. There’s more to this article!

Learn the Wget Command with 20 Practical Examples Wget lets you download Internet files or even mirror entire websites for offline viewing. Here are 20 practical examples for using the wget command. How do I download an entire website for offline viewing? How do I save all the MP3s from a website to a folder on my computer? How do I download files that are behind a login page? Wget is a free utility – available for Mac, Windows and Linux (included) – that can help you accomplish all this and more. Mirror an entire website with wget Wget is extremely powerful, but like with most other command line programs, the plethora of options it supports can be intimidating to new users. 1. 2. 3. 4. 5. 6. 7. 8. Mirror websites with Wget 9. 10. 11. 12. 13. Wget for Downloading Restricted Content Wget can be used for downloading content from sites that are behind a login screen or ones that check for the HTTP referer and the User Agent strings of the bot to prevent screen scraping. 14. 15. 16. Retrieve File Details with wget 17. 18. 19. 20.

Make your polls Free Stock Images & Videos ~ AllTheFreeStock.com Kali Linux "NetHunter" — Turn Your Android Device into Hacking Weapons The developers of one of the most advance open source operating system for penetration testing, 'KALI Linux' have announced yesterday the release of a new Kali project, known as NetHunter, that runs on a Google Nexus device. Kali Linux is an open source Debian-based operating system for penetration testing and forensics, which is maintained and funded by Offensive Security, a provider of world-class information security training and penetration testing services. It comes wrapped with a collection of penetration testing and network monitoring tools used for testing of software privacy and security. After making its influence in hacker and security circles, Kali Linux has now been published with Kali Nethunter, a version of the security suite for Android devices. The tool is a mobile distribution designed to compromise systems via USB when installed and run on an Android phone.

Gaze Chaos Computer Club 9 Hilariously Random Websites To Help You Procrastinate The Internet is a wonderful place, but sometimes it just spawns the weirdest creations.Case in point — these 9 websites. Some are genuinely hilarious for no good reason. Others are just so strange you’ll wonder why they were ever created. Regardless, you’re bound to have a laugh or two…while you procrastinate. Sanger.dk Spoiler alert: It’s a pug licking your screen, adorably. Why does it exist? And just so you know, “sanger” is Danish for “singer”. Has The Large Hadron Collider Destroyed The World Yet? Thankfully, the answer is a big “NOPE.” Back when the Large Hadron Collider was being built, there was some controversy surrounding the safety of the device. And this website is proof of that. Hacker Typer Ever want to feel like you’re an awesome secret hacker super spy? Hit random keys on your keyboard. Garfield Minus Garfield Garfield is funny. Well, that got deep. Koalas To The Max Images and videos aren’t always needed to make , but in this case, they certainly help. Why? Omfg Dogs Eel Slap

Manifestos for the Internet Age | Greyscale Press by various authors March 2015 Manifestos for the Internet Age is a reader that collects manifestos of computer culture, starting with Ted Nelson (Computer Lib), through the GNU Manifesto and the Hacker Manifesto (1986), up to current influential positions such as The Cult of Done, the Cryptoparty Manifesto, the Critical Engineering Manifesto (Oliver, Savičić, Vasiliev), the 3D Additivist Manifesto (Morehshin Allahyari & Daniel Rourke), the Xenofeminist Manifesto (Laboria Cuboniks), and many other writings from both artists and activists. Some of the included writings: Work in progress This book is currently in beta status. The initial release was created over a week-end, during a Greyscale Press “BookLab” workshop held at the Fahrenheit39 Art Book Fair in Ravenna (read more about it here). Release History Version 0.0 edited March 6-7 2015 at Fahrenheit39 Version 0.1 released March 11 2015 Version 0.2 released March 24 2015 Version 0.3 (current) released April 2015 Gallery

10 Websites Guaranteed To Press Your Buttons [Weird & Wonderful Web] We humans are naturally curious creatures. We see something, almost anything, and we want to reach out and grab it, touch it, feel it, and interact with it. Which is all good as long as the thing we’re reaching for isn’t going to bite us or trigger a nuclear holocaust. Contrary to popular belief, the latter isn’t as easy as pressing a big red button. NB: If you hate Adobe Flash then you should probably stop scrolling right now. Make Everything OK Life sometimes sucks. It turns out such a button does exist, and it’s sitting unloved on the Web, just waiting to be pressed. Nooooooooooooooo Star Wars is never going to go away, especially now that the fun factory that is Disney owns the franchise. Also not going away are the stupid decisions George Lucas has made over the years. Enter The Hatch The TV series Lost ended a while ago, but thanks to people binge-watching shows on media streaming services it will never truly die. Will You Press The Button? Will You Press The Button? Bored Button

literally words — Graphing when your Facebook friends are awake