Get supported by your Community. Les projets. Crowd resourcing de projets. Tour LATAM 2013. The collaborative economy is being recognized as a real opportunity for the economic development of cities and regions on the 21st century. 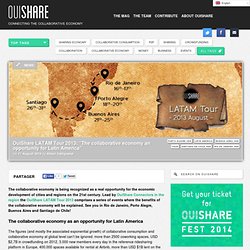 Lead by OuiShare Connectors in the region the OuiShare LATAM Tour 2013 comprises a series of events where the benefits of the collaborative economy will be explained. See you in Rio de Janeiro, Porto Alegre, Buenos Aires and Santiago de Chile! The collaborative economy as an opportunity for Latin America The figures (and mostly the associated exponential growth) of collaborative consumption and collaborative economy at global level can’t be ignored: more than 2500 coworking spaces, USD $2,7B in crowdfunding on 2012, 3.000 new members every day in the reference ridesharing platform in Europe, 400.000 spaces available for rental at Airbnb, more than USD $1B lent on the last 6 months on the main p2p lending platforms, … The same dynamics are arriving to Latin America. OuiShare from global to local And more Tours in Europe this fall. Ulule - 1er site de financement participatif européen.

Where people come together to borrow and lend... - Finance, Lending, Money And Social Apps. With the banks reputations nose-diving daily and both borrowers and investors suffering as a consequence, Peer to Peer lending is a great way to cut them out of the equation altogether. 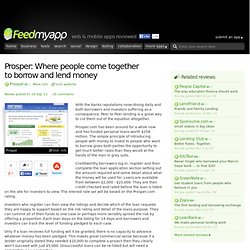 Prosper.com has been around for a while now and has funded personal loans worth $256 million. The simple principle of introducing people with money to invest to people who want to borrow gives both parties the opportunity to get much better rates than they would at the hands of the men in grey suits. Creditworthy borrowers log-in, register and then complete the loan application section setting out the amount required and some detail about what the money will be used for.

Loans are available from between $2,000 - $25,000. They are then credit checked and rated before the loan is listed on the site for investors to view. Crowdfunding Will Make 2013 The Year Of The Gold Rush. J'ai lancé le prêt étudiant équitable. Patronhood. Spacehive. Citizinvestor. Babyloan - Micro crédit Solidaire. Www.dreamshake.com. Kickstarter. Discover Projects. Plate-formes d'échanges Dons ventes ... Le revenu de base - le Film. How To Crowdsource Grading. I loved returning to teaching last year after several years in administration . . . except for the grading. 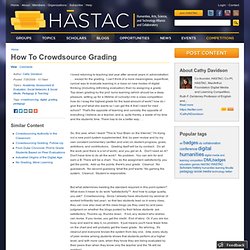 I can't think of a more meaningless, superficial, cynical way to evaluate learning in a class on new modes of digital thinking (including rethinking evaluation) than by assigning a grade. Top-down grading by the prof turns learning (which should be a deep pleasure, setting up for a lifetime of curiosity) into a crass competition: how do I snag the highest grade for the least amount of work?

How do I give the prof what she wants so I can get the A that I need for med school? That's the opposite of learning and curiosity, the opposite of everything I believe as a teacher, and is, quite frankly, a waste of my time and the students' time. There has to be a better way . . . But what determines meeting the standard required in this point system? Here's the syllabus for the course. There will be no exams and no formal, final research papers required in this class.

Économies Collectives. What is Plantly? Carbon Zero: A Short Tour of Your City's Future by Alex Steffen. The climate crisis demands that we start rebuilding our cities to become carbon neutral. 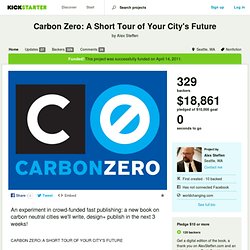 But what does carbon neutrality mean? What does it look like? How do we measure it? My goal here is to explain carbon neutrality in a short, amusing book that can be read in an afternoon It's time to demystify bold climate action, fast. With captivating design from Open (the creative geniuses behind Good magazine's design, Planet Green's logo, and the new Google for Nonprofits campaign) and text drawn from my popular "climate neutral cities" talks, Carbon Zero: A Short Tour of Your City's Future will take the reader on an adventure into his or her city's future. I'll then move step by step through the various greenhouse gas sources, exploring solutions which can slash those emissions while providing more prosperity, better quality of life, or both.

Bucky Fuller once said that people never leave a sinking ship until they see the lights of another ship approaching.