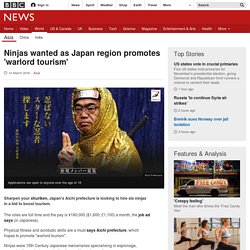 The roles are full time and the pay is ¥180,000 ($1,600; £1,100) a month, the job ad says (in Japanese). Physical fitness and acrobatic skills are a must says Aichi prefecture, which hopes to promote "warlord tourism". Ninjas were 15th Century Japanese mercenaries specialising in espionage, assassination, sabotage and other forms of irregular warfare. Such trickery was considered beneath the samurai, or military nobility, who had to observe strict rules on fighting honourably. Image copyright Getty Images The job specification has been somewhat changed for the advertised roles. It involves stage performances and "PR work" for radio and television. Ideal candidates should "enjoy being under the spotlight even though he or she is a secretive ninja," Satoshi Adachi of the prefecture's tourism promotion unit, told AFP. Image copyright Reuters. Three excellent cover letter examples. The first thing a potential employer sees in your job application is the cover letter. 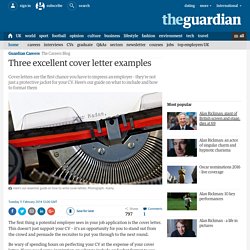 This doesn't just support your CV – it's an opportunity for you to stand out from the crowd and persuade the recruiter to put you through to the next round. Be wary of spending hours on perfecting your CV at the expense of your cover letter. If you need some inspiration on what to include and what format to use, here are our helpful guides – just remember not to copy them as exact templates. 1. Standard, conservative style This is ideal for sectors such as business, law, accountancy and retail. Dear Mr Black,Please find enclosed my CV in application for the post advertised in the Guardian on 30 November.The nature of my degree course has prepared me for this position. 2.

This may vary according to the nature of the organisation and the industry you're applying to. Dear Mr Brown,I am writing to enquire if you have any vacancies in your company. 3. Dear Ms Green,· Confused by commas? School children prepare for work with nine-to-five days. Stories of Afghan girls whose lives have been turned around by education revealed. In the western world, we take education for granted and often disgruntled children bemoan the fact they they have to attend class and complete homework. 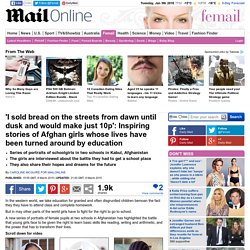 But in may other parts of the world girls have to fight for the right to go to school. A new series of portraits of female pupils at two schools in Afghanistan has highlighted the battle that young girls face to be given the right to learn basic skills like reading, writing and arithmetic, and the power that has to transform their lives. Scroll down for video A series of portraits of Afghan school girls show the growing desire in the country for young women to be educated (Left: Zeinab, 12, Centre: Nadira, 10, and right: Gulmakai, 14) Photographer Simon Urwin interviewed young girls and their mothers at a school in Kabul, which teaches equality, tolerance, and human rights, including women's issues, alongside traditional academic subjects like maths and science.

Career Test High School College Students Free Job Quiz Best Tests. Ninety-year-old student: 'Education will be your wealth' Joy: A Subject Schools Lack. When Jonathan Swift proposed, in 1729, that the people of Ireland eat their children, he insisted it would solve three problems at once: feed the hungry masses, reduce the population during a severe depression, and stimulate restaurant business. 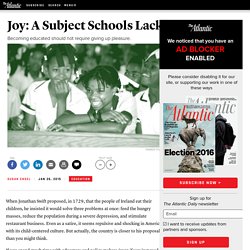 Even as a satire, it seems repulsive and shocking in America with its child-centered culture. But actually, the country is closer to his proposal than you might think. If you spend much time with educators and policy makers (even if you just read editorials about education), you’ll hear a lot of the following words: "standards," "results," "skills," "self-control," "accountability," and so on. I have visited some of the newer supposedly "effective" schools, where children chant slogans in order to learn self-control, are given a jelly bean when they do their worksheet, or must stand behind their desk when they can’t sit still. I’m a mother of three, a teacher, and a developmental psychologist.

A friend told me the following story. A first hand perspective on Finnish schools vs North American schools. My twitter feed is varied with every type of account from family, to Moms and Dads, to local breweries, to bird & carrot & bear parody accounts (not kidding), and a smattering of educational tweeters. 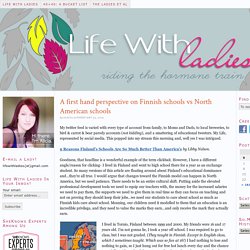 My Life, represented by social media. This popped into my stream this morning and, well yes I was intrigued. 9 Reasons Finland’s Schools Are So Much Better Than America’s by Libby Nelson. Goodness, that headline is a wonderful example of the term clickbait. However, I have a different angle/reason for clicking- I lived in Finland and went to high school there for a year as an exchange student.