AI and Bitcoin Are Driving the Next Big Hedge Fund Wave. Jeffrey Tarrant is a Wall Street guy. 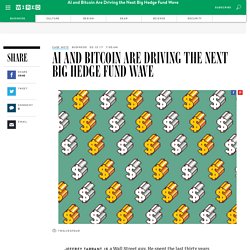 He spent the last thirty years investing in new hedge funds. As the founder and CEO of a firm called Protege Partners, he compares himself to Sam Altman, the president of Y Combinator. What Altman does for Silicon Valley tech startups, Tarrant does for hedge funds. “I help seed them and incubate them,” he says. The analogy has never been more true than right now. Hedge funds are moving beyond the quants. The 1970s saw the rise of discretionary funds, where iconic investors like George Soros used their very human judgments to find new opportunities in the market. As a prime example, he cites Numerai, a San Francisco hedge fund that makes trades using machine learning models built by thousands of anonymous data scientists paid in bitcoin. Such funds aren’t always easy to wrap your head around. Bitcoin Will Never Be a Currency—It's Something Way Weirder.

The value of bitcoin surged past $1,000 this week, the first time it has reached such heights since late 2013. 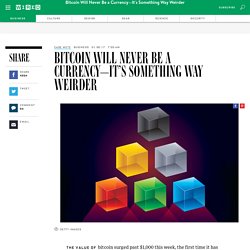 But don’t let that big number fool you: this strange and controversial technology is no closer to becoming a mainstream currency. Even Olaf Carlson-Wee, the first employee at Coinbase, the country’s most important bitcoin company, will tell you that bitcoin will never be a substitute for the dollar. “It was a big mistake that any of this was ever compared to currency,” Carlson-Wee says. This seemingly pessimistic sentiment is what you hear more and more often, not only from people on the fringes on the bitcoin community but those at the heart of it.

Bitcoin is not something the average person will ever use to buy and sell stuff, they say, particularly in the US and other Western countries. Bitcoin is also a useful way of moving money across international borders, and that will likely be its main application over the next several years. On Their Own. Businessinsider. BI Intelligence This story was delivered to BI Intelligence IoT Briefing subscribers. 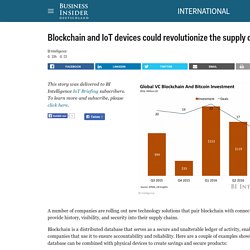 To learn more and subscribe, please click here. A number of companies are rolling out new technology solutions that pair blockchain with connected sensors to provide history, visibility, and security into their supply chains. Blockchain is a distributed database that serves as a secure and unalterable ledger of activity, enabling companies that use it to ensure accountability and reliability. Here are a couple of examples showing how this database can be combined with physical devices to create savings and secure products: Walmart is using blockchain to monitor produce in its stores, according to Bloomberg.

As more and more devices create mass quantities of data and companies aim to leverage the IoT to create and employ those data, security and accountability will be major hurdles. Here are some key takeaways from the report: In full, the report: The choice is yours. 10 amazing ways Blockchain could be used in education. Blockchain. 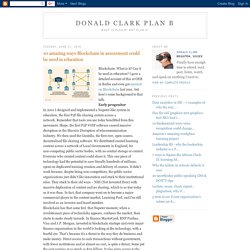 What is it? Can it be used in education? In 2001 I designed and implemented a Napster-like system that distributed learning content across a network, for non-competing public sector bodies, with no central storage or control. Everyone who created content could share it. How AI will change the modern workplace. Technology is changing the way we live. 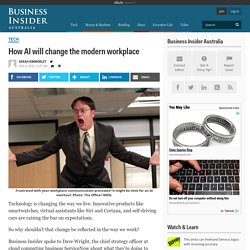 Innovative products like smartwatches, virtual assistants like Siri and Cortana, and self-driving cars are raising the bar on expectations. So why shouldn’t that change be reflected in the way we work? Business Insider spoke to Dave Wright, the chief strategy officer at cloud computing business ServiceNow about what they’re doing to improve processes and productivity and the workplace, as well as trends we’re likely to see in the future.

But first if you’re not sure what ServiceNow does, here’s how Wright explains it. “The example I always use is Uber,” he says. Forbes Welcome. PwC Expert: $1.4 Billion Invested in Blockchain in 2016. In the last nine months of 2016, $1.4 billion has been invested globally in blockchain startups, according to a PricewaterhouseCoopers (PwC) expert, reports Silicon Republic. 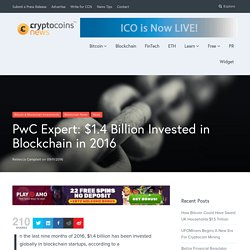 Discussing the growth of blockchain at a recent PwC’s Business Forum in Dublin, leading PwC executive Seamus Cushley, who oversees a 25-strong blockchain research lab in Belfast, explained that blockchain’s growth was expanding with many startups in finance, healthcare, and supply chain monitoring utilizing blockchain technology. However, while banks such as private Indian lender ICICI are looking at blockchain or that 90 percent of major north American and European banks are exploring blockchain, banks have yet to fully deploy the technology on a massive scale. That, though, hasn’t stopped other sectors from embracing the technology hence the massive investment in blockchain over the past nine months. He stated: Banks and the Blockchain Revolution Moving Away from the Fear of Blockchain He told the publication: Seven Reasons Why Investment in Blockchain Has Slipped. There has been a lot written in the press recently that investment in Blockchain has declined and Blockchain is losing its lustre. 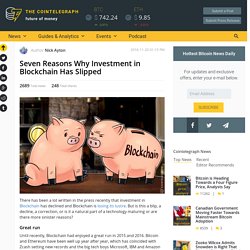 But is this a blip, a decline, a correction, or is it a natural part of a technology maturing or are there more sinister reasons? Great run Until recently, Blockchain had enjoyed a great run in 2015 and 2016. The superhero of artificial intelligence: can this genius keep it in check? The Humans Who Dream Of Companies That Won't Need Us. Like other serious crypto-anarchist visionaries, the 21-year-old Russian Canadian entrepreneur Vitalik Buterin sees the blockchain—the public ledger underlying bitcoin—as a way to liberate us all from inefficiency, cut out the middleman, and make big government and business bow at the free market's feet. 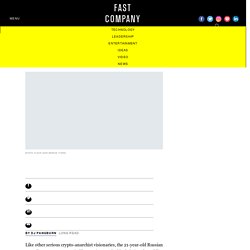 What makes his vision different is its scope. Where bitcoin aims to disrupt banks, Buterin's Switzerland-based company, Ethereum, aims to become what he calls "the foundational platform for everything. " At the heart of this open-source software platform is a currency, Ether, named after the pre-relativity hypothesis to explain the propagation of light waves. Though it has yet to make a public release, Ethereum has already recruited a strong roster of programmers and last year raised $18.4 million, in the third most well-funded crowdfunding effort in history.