20 ways to use a tablet in the classroom. Whatever model of Android or iOS tablet you have available, it’s a hugely versatile tool when it comes to educating and entertaining children. 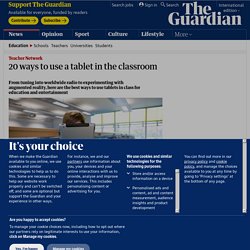 Here are some of the best apps and features you can make use of in the classroom – some of which you have to pay for and others that are free. 1 Dive into 360-degree videos This is the most basic form of virtual reality, a full sphere of video centred on the spectator who can view an environment in any direction. The content works with VR headsets but is also available through browsers and mobile devices. Launch a 360-degree video in the Facebook or YouTube apps and children can tilt it around to change the view as the clip plays (a simple search should turn up some 360-degree content that will be clearly labelled). 3 apps para gestionar sentimientos. Five iPad Apps That Help Students Start Creative Stories. In the year that I taught language arts before moving into the social studies department one of the challenges that my students faced in writing short stories was coming up with ideas to get started. 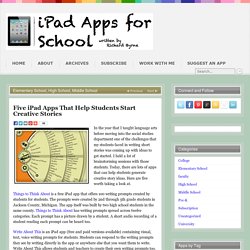 I held a lot of brainstorming sessions with those students. Today, there are lots of apps that can help students generate creative story ideas. Here are five worth taking a look at. Things to Think About is a free iPad app that offers 100 writing prompts created by students for students. The prompts were created by 2nd through 5th grade students in Jackson County, Michigan. Write About This is an iPad app (free and paid versions available) containing visual, text, voice writing prompts for students. Shake-a-Phrase is a fun iPad app (currently priced at $1.99) for elementary school and middle school students to use to start stories and practice recognizing parts of speech. 5 Fantastic Apps for Digital Storytelling on iPads. This is a guest post from Samantha Morra of EdTechTeacher.org Computers, and the digital tools on those computers, brought video editing to the classroom years ago. 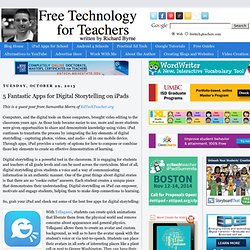 As those tools became easier to use, more and more students were given opportunities to share and demonstrate knowledge using video. iPad continues to transform the process by integrating the key elements of digital storytelling - capturing photos, videos, and audio - all in one mobile device. Through apps, iPad provides a variety of options for how to compose or combine those key elements to create an effective demonstration of learning.

Digital storytelling is a powerful tool in the classroom. It is engaging for students and teachers of all grade levels and can be used across the curriculum. So, grab your iPad and check out some of the best free apps for digital storytelling: Videolicious allows students to shoot, do short quick edits in a matter of minutes, and easily share their videos. 50 Of The Best Resources For iPads In Education. 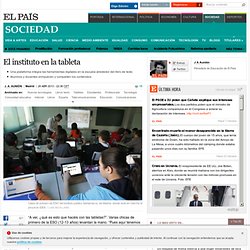 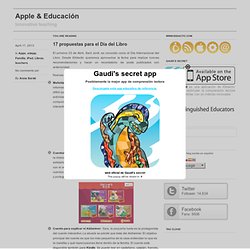 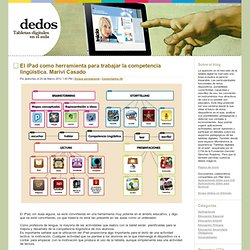 We’ve already talked about the key trends in the report and some challenges we face in implementing education technology , so we’re ready to take a look at the six technologies highlighted in the report as being game-changers for education. Ideas para un proyecto con tabletas. iPads in Education- Examples from the Classroom. De la Tableta al Tablet. Top 3 problems with tablets in the classroom. By Beth Bacon Educators—and students—are enthusiastic about tablets, but the new technology can be problematic. 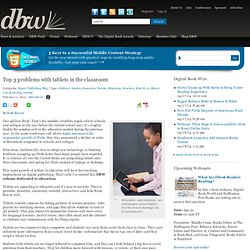 One million iPads. That’s the number of tablets Apple sold to schools and colleges in the year before the current school year. It’s roughly double the number sold in the education market during the previous year. In the same conference call where Apple announced the exponential growth of iPads, they also announced a decline in sales of Macintosh computers to schools and colleges. Education, traditionally slow to adopt new technology, is bucking tradition snapping up iPads faster than many people have expected. El iPad en manos de alumnos de parvulario. Using iPads In Scientific Fieldwork. In Earth Science, fieldwork represents a significant learning opportunity – it contextualises much of the theory taught in class, and engages students in the scientific processes of collecting and organising observational data. 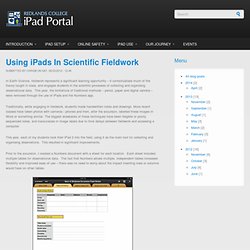 This year, the limitations of traditional methods – pencil, paper and digital camera – were removed through the use of iPads and the Numbers app. Traditionally, while engaging in fieldwork, students made handwritten notes and drawings. More recent classes have taken photos with cameras / phones and then, after the excursion, labelled these images in Word or something similar. The biggest drawbacks of these techniques have been illegible or poorly sequenced notes, and inaccuracies in image labels due to time delays between fieldwork and accessing a computer. This year, each of my students took their iPad 2 into the field, using it as the main tool for collecting and organising observations.

How A Classroom Of iPads Changed My Approach To Learning. Recently, my wife and I had the opportunity to take our kids on an overseas family holiday. About a third of the way through our trip as I tiredly walked to yet another airport terminal, I found myself thinking, “I know how check-in works. Someone at a counter will tell me what to do, so I can turn off and just go with it.” On entering the terminal, we found self check-in kiosks and one distinctly disinterested attendant hiding behind a counter at the far end of the hall. We struggled through the process – our first encounter with such a system – telling each other what to do, making a simple process much harder than it really needed to be.

It occurred to me later that my prior experience and expectations had made it harder to adjust my thinking. 25 Ways To Use Tablets In The Classroom. When I was a kid, I dreamt about our school desks as computer screens. How cool would it have been to be able to draw, write, and learn directly onto my own computer? As the years went on, people theorized that laptops would take over the classroom, but the price of these devices was too high for a 1 to 1 ratio.

It never quite caught on in lower grade schools. See Also: 25 Ways To Use iPads In The Classroom by Degree of Difficulty Now, it is the age of the tablet. Yet, some educators are still skeptical. 1. Tablets y Game-Based Learning: nuevas formas de aprender jugando. 21 Reasons To Use Tablets In The 21st Century Classroom. 21 Reasons To Use Tablets In The 21st Century Classroom by Julie DeNeen, opencolleges.edu.au When I was a kid, I dreamt about our school desks as computer screens. How cool would it have been to be able to draw, write, and learn directly onto my own computer? As the years went on, people theorized that laptops would take over the classroom, but the price of these devices was too high for a 1 to 1 ratio.

Apple & Educación. 9 Outstanding Apps to Teach Creative Writing. 10 i pad projects students will love. Pair Activities With the iPad. 6 Apps That Teach Math Concepts. For young learners, there are a plethora of apps out there to help learn how to count, and for older learners, often times a graphing calculator or scientific calculator app will do the trick. 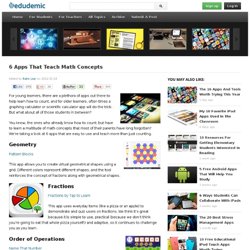 But what about all of those students in between? You know, the ones who already know how to count, but have to learn a multitude of math concepts that most of their parents have long forgotten? We’re taking a look at 6 apps that are easy to use and teach more than just counting. Elementary Technology from Southfield Christian School. iPads in the classroom reinvigorate teachers. We often hear about the iPad's impact on students and their academic achievement, but a new article in Edudemic also discusses the effect iPads are having on teachers. 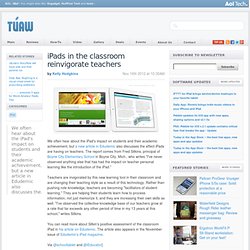 The report comes from Fred Sitkins, principal of Boyne City Elementary School in Boyne City, Mich., who writes "I've never observed anything else that has had the impact on teacher personal learning like the introduction of the iPad. " Teachers are invigorated by this new learning tool in their classroom and are changing their teaching style as a result of this technology. iPad in schools 102. iPad Published on November 17th, 2012 | by Mark Anderson I’m being asked over and over again at the moment about iPads and how they can be used in education. Here are some of the questions I’ve been asked lately. “My Head has given me 30 iPads and an Apple TV, what do I do?” “I’m looking at iPads. Apps iPad Proyectos Multimedia Infantil y Primaria. 10 apps per a fer una radio a l'escola. iPads for Learning - Getting Started. 10 apps para producir una radio escolar. 12 Crucial Questions to Ask before Using iPad with your Students.

iPad is making huge inroads into education and it is believed to have revolutionized the whole concept of mobile learning. More and more schools are, if not already adopting 1:1 environments or BYOD projects , then they are at least debating a future inclusion of this mobile device in the classroom. But as a teacher and practitioner who is going to be using iPad with his/her students, you need to think about the instructional use of this tool. There are several questions you need to foment in your mind and hopefully find answers to before using iPad in your teaching. You basically need to ask yourself the following questions : 40 iPad Apps For Homeschooled Students. El iPad llega a la escuela. La mayoría de los institutos catalanes debate estos días si sigue con el portátil en las aulas. Otros centros, mientras, han decidido dar un salto e ir más allá en la aplicación de las nuevas tecnologías en la educación. 8 ideas para usar el cómic en el aula y apps para crearlos en iPad y Android.

iPads in Schools. How To Capture Ideas Visually With The iPad. By its very design, the iPad promotes consumption. Essentially an interactive mobile screen, the combination of physical form and supporting software-based user interface on Apple’s wunder-tablet suggests watching and listening, enabling you to tear the “monitor” off the desk and take it with you. By lacking a keyboard, input and production aren’t quite as natural. That isn’t necessarily because the iPad can’t accommodate such input, but rather that the software–and our habits as users–haven’t completely caught up with the not-insignificant shift in interface. But it doesn’t have to be that way. One microcosm of the potential of the iPad in learning is the concept of visual recording.