Ten ways teacher librarians improve literacy in schools. Australian schools constantly strive to improve the literacy outcomes of their students. Supporting literacy achievement for struggling readers is particularly important because these readers have their disadvantage compounded: capable students develop “richer” skills through continued exposure to reading, and the gap between them and struggling readers widens. The number of Australian students deemed “low performers” in reading literacy proficiency has been rising over time. Our percentage of high performers is shrinking – nearly one in five adolescents are in the low performer category. Read more: Six things you should do when reading with your kids With school about to start for the year, we should consider how we can optimise support for struggling readers. Research suggests the presence of qualified library staff in school libraries is associated with better student performance in literacy.

What do they do? 1. 2. 3. 4. 5. 6. Visualizing Publicly Available US Government Data Online. Brightpoint Consulting recently released a small collection of interactive visualizations based on open, publicly available data from the US government. 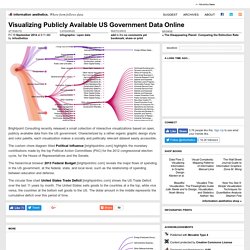 Characterized by a rather organic graphic design style and color palette, each visualization makes a socially and politically relevant dataset easily accessible. The custom chore diagram titled Political Influence [brightpointinc.com] highlights the monetary contributions made by the top Political Action Committees (PAC) for the 2012 congressional election cycle, for the House of Representatives and the Senate. The hierarchical browser 2013 Federal Budget [brightpointinc.com] reveals the major flows of spending in the US government, at the federal, state, and local level, such as the relationship of spending between education and defense.

The circular flow chart United States Trade Deficit [brightpointinc.com] shows the US Trade Deficit over the last 11 years by month.

Queer Books for Teens. Thank you so much for all the feedback you’ve sent in. 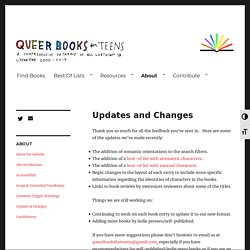 IASL. Do not be silenced. How opinion formers gives the library debate diversity and more voices. The Danish Union of Librarians has made a bold and important move, which I want to share with you. 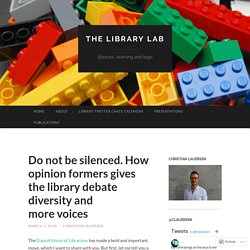 But first, let me tell you a story some of you might already know: President John F. Kennedy was visiting NASA headquarters for the first time, in 1961. While touring the facility, he introduced himself to a janitor who was mopping the floor and asked him what he did at NASA. The janitor replied, “I’m helping put a man on the moon!” I like this little story because it reminds me that we are all ambassadors for telling the purpose and value of our institutions, from top management to the janitor who mops the floor. The Danish Union of Librarians has taken responsibility for trying to bridge their members with methods and skills to influence the public debate by establishing an “Education for Opinion Formers” (sorry, no English version of the program available at this time that I can link to). Why did you join the opinion formers? The education so far has contained three parts. Cheers Christian. Library Leadership & Management Association (LLAMA) Foundational Competencies for Library Leaders and Managers Introduction LLAMA's 14 Foundational Competencies Background Selection of the Competencies Competencies Committee Introduction As the professional organization for library leadership and management development, the Library Leadership and Management Association (LLAMA) has identified 14 definitive competencies that can be applied across roles, career stages and library types. 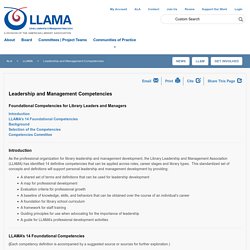 This standardized set of concepts and definitions will support personal leadership and management development by providing: LLAMA’s 14 Foundational Competencies (Each competency definition is accompanied by a suggested source or sources for further exploration.) Communication skills Leaders effectively employ a wide range of well-developed verbal, non-verbal and written communication methods to interact with employees and stakeholders, conveying information clearly and efficiently and using active listening for consistent, mutual understanding. Barrett, D. Ethics. How to use the Teams feature on TweetDeck. TweetDeck’s teams feature allows multiple people to share a Twitter account without having to share the password. 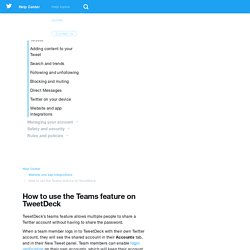