James Bullough – WeTransfer This Works. When it comes to James Bullough’s magnificent murals, the idea of massive models being reconfigured and fragmented might be a little unsettling. 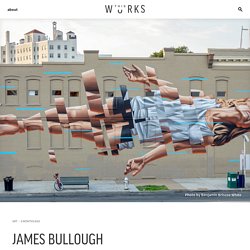 But this only paves makes the effect even more surprising when you come face-to-face with these gigantic masterpieces. James manages to display amazingly-detailed hyper-realistic images of people swirling across the canvas, playing with the notion of realism versus abstraction by moving bits and pieces of the models around. At first James only painted realistically, but once he started to collaborate with others, his style changed step by step.

“We would start with the idea of a portrait and then break it into sections where I do the realistic part and the other artist would do the other parts in their style,” James explains. “Eventually I started experimenting with that a bit more, and rather than having missing pieces and taking them out, I started just moving them around on the canvas.” Photo by Nika Kramer. Touching the stars with Nicholas Roemmelt Blog. Nicholas Roemmelt captures tremendous beauty of the nature and proves that your prime occupations doesn’t matter here. 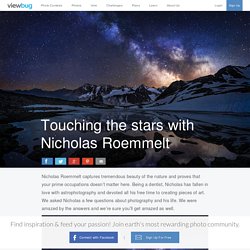 Being a dentist, Nicholas has fallen in love with astrophotography and devoted all his free time to creating pieces of art. We asked Nicholas a few questions about photography and his life. We were amazed by the answers and we’re sure you’ll get amazed as well. 1. Shop — Flat Vernacular. Behance. Oliver Curtis photographs the world’s most famous monuments, the wrong way round. Photographer Oliver Curtis has travelled the globe capturing the most famous landmarks the world over: the Colosseum, the Pyramids, the Eiffel Tower, Stonehenge….the list is endless. 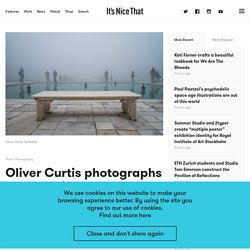 Photographer Ina Niehoff's beautiful analogue Istanbul travelogue. Taken during a weekend stay in Istanbul, Ina Niehoff’s latest collection of photographs is a beautiful travelogue journaling her own personal observations and experience of the ancient, transcontinental city. 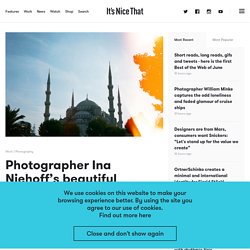 For Ina, photography and travel go hand-in-hand, each a means of gaining a deeper understanding of the other. AKIF HAKAN CELEBI - Fashion/Contemporary Art/Commercial/Portrait Photographer. Timeline of History. Fragments of Extinction. Aware that intensive field work was essential, we traveled to the world’s largest remaining areas of primary forest along the equator (where, given the equal length between days and nights, life cycles – and thus sonic behaviors – are evolutionarily tuned to extremely regular patterns) and recorded 24-hour sound portraits of various habitats within what are considered to be the oldest and most diverse ecosystems on Earth. 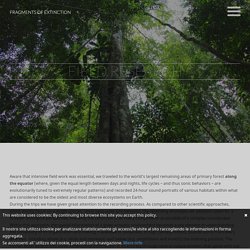 During the trips we have given great attention to the recording process. As compared to other scientific approaches, which mostly focus on a single species’ sonic languages and behavior, the recording strategies we adopted called for a broader ecological perspective, involving the collection of as many components as possible of a complex soundscape. Within this approach, the spatial information of a given acoustic environment becomes a key element in understanding the complexity of its organization and making it available to audiences. Nobumichiasai.com. HI*Sessions. Recent work by Adrien M / Claire B + 'eMotion' - Tool for interactive visual performance. Developed by Adrien Mondot (am-cb.net), eMotion is a tool for creating interactive motions of objects for live visual performances. 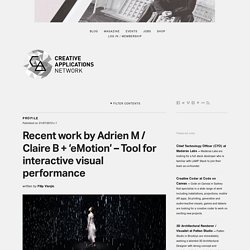 Developed as a research tool for the work of Adrien M and Claire B, eMotion is based on objects (like particles, text, drawing strokes, quartz compositions). The creation of motion in the program is laid on a physical model, ie physical forces are applied to objects. The application includes a number of various basic tools including things like simple particle tool, text particle tool, pen tool, the QC tool to load a Quartz Composition and video particle. Tools to modify objects include edit tool, movement brush tool, rendering options tool, camera tool and a connection tool : to edit the relationship between objects, forces and external controller like wiimote, sudden motion sensor, OSC captors, midi inputs. Other features include the script window, the layer window, the inspector panel, the records panel and the forces inspector. Selected Works: WITCHORIA. Projection Mapping Machine vs. Nature. 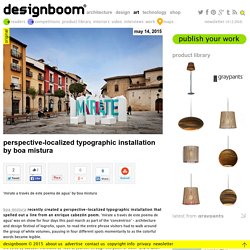 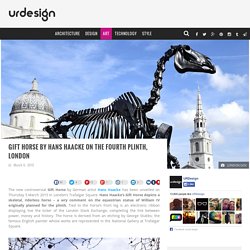 Hans Haacke’s Gift Horse depicts a skeletal, riderless horse – a wry comment on the equestrian statue of William IV originally planned for the plinth. Tied to the horse’s front leg is an electronic ribbon displaying live the ticker of the London Stock Exchange, completing the link between power, money and history. The horse is derived from an etching by George Stubbs; the famous English painter whose works are represented in the National Gallery at Trafalgar Square. images via london gov + yahoo Comments comments.

Urs Fischer @ Gagosian New York. Urs Fischers current show at Gagosian Gallery in New York surprised me on first viewing because the Fischer I had in my mind produced either giant merged portraits slapped with even bigger images of cigarettes, or of rudimentary clay sculptures mimicking renaissance references, or of extremely heavy-handed expressionist marks layered overtop of large-scale postcard imagery. 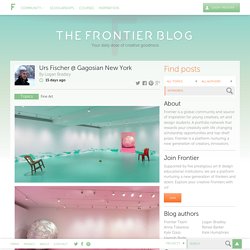 The stills from his current show seemed at odds because they didn't appear to fit into his anti-art aesthetic as overtly as his previous work. There seemed to be a certain amount of restraint evident, and an almost prettiness that I wasn't expecting. Urs Fischer's large scale installations, sculptures and paintings reference and mimic subject matter traditionally evoked in painting. 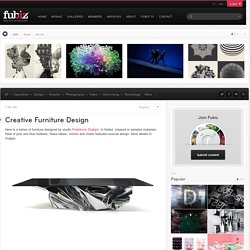 Chaos and Color: Poster Inspiration Board. Once again we present another beautiful poster selection - visit our Pinterest board for an extensive library of awe-inspiring designs. Today, as you'll notice, they don't follow any particular theme or style. You will see a lot visual experiments with disconnected styles taking us far away from rationalism.