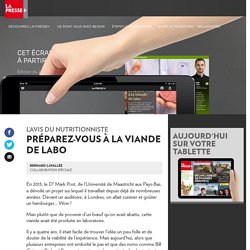 Un remplacement plus éthique. À notre sujet. Antennae vol23 no1. Dussault Medhavi MEnv 2017. Food - 4ento. #3 - Shellac (shughlack) GlazeIf you were given two apples, one was shiny and red and the other, was still red, but not shiny at all, which one would you choose? 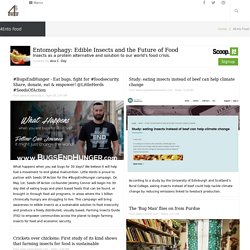 If you chose the shiny red apple, chances are you are eating shellac. Shellac, gross enough, is a sectreation made from the rear end of a lac bug, and the food industry dips just about anything in it. Although you may think of wood varnishes or sealants when you think of shellac, you should really be thinking about that coating on your medication, on your candy, coffee beans, and yes, even the produce you buy in the store. If it has a shiny coating, chances are it’s covered in shellac. This picture shows you the tiny lac bug. Suppléments à l'entraînement: muscles en poudre. 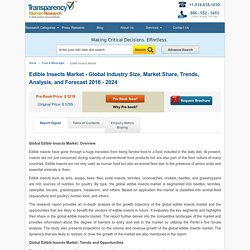 At present, insects are not just consumed during scarcity of conventional food products but are also part of the food culture of many countries. Edible insects are not only used as human food but also as animal feed due to the presence of amino acids and essential minerals in them. I ate crickets because they're the future of food. Launched in late 2013 by three brothers — Jarrod, Darren, and Ryan Goldin — NMF is a major supplier of cricket flour, which Jarred describes as "floured meat. 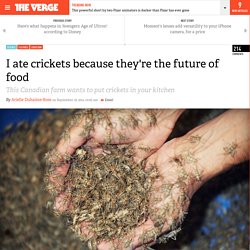 " "It’s chock-full of protein, has more iron than spinach, as much calcium as milk, all the amino acids, tons of omega 3, and tons of B12," he says. "So not only does it taste good, it’s also unbelievably healthy. " The company expects to ship 3,000 pounds of flour in September alone; by year’s end, they predict that figure will rise to 10,000 pounds a month. "We’re having fun and this [growth] is all awesome," Jarrod says, "but the amazing thing is that it’s not compromising nature — or taste. " I’m standing with Jarrod and Darren in front of Reptile Feeders, the Goldins’ original pet-food business and the first stop in my daylong tour of NMF.

The two brothers founded Reptile Feeders six years ago, but it wasn’t until 2013 that Jarrod quit his job as a chiropractor to join them in a new venture to push insects as food for people. How food entrepreneurs hope to persuade us to eat bugs. (Photo by Erik Putz) There’s something disconcerting about watching a nine-year-old kid scarf bugs from a bowl in quick, greedy handfuls. 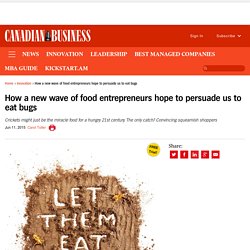 But for Kaya Goldin, a fat roasted insect holds the same tantalizing appeal that Gobstoppers and M&M’s do for other children. Spooning pile after pile of meaty wrigglers into her palm, Kaya tosses a few into her mouth, then lets out a happy sigh. “Mmm, waxworms!” She says. Is this kid for real? Links - Edible insects - WUR. Edible-insects-report by MFloru. How Westerners can save the world by extending their diet with a healthy and delicious ingredient Access the report by downloading the zip file at the top of the page You can also watch the report online here. 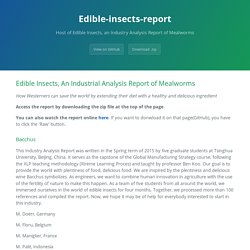 If you want to donwload it on that page(GitHub), you have to click the 'Raw' button. Bacchus This Industry Analysis Report was written in the Spring term of 2015 by five graduate students at Tsinghua University, Beijing, China. M. M. M. M. I. Why insects? Given the trend of population increase, the Earth is expected to be inhabited by more than 9 billion people by 2050.

Check out our brochure References A full list of all references we used to compile the report can be accessed here. Insect Food Products Currently Available For Sale. In this post I am going to show you what insect food products are currently available online and sometimes even in the supermarkets! 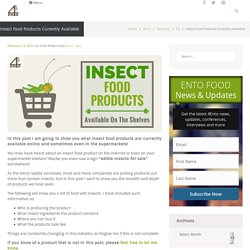 You may have heard about an insect food product on the internet or even on your supermarket shelves? Maybe you even saw a sign “edible insects for sale” somewhere! As the trend rapidly increases, more and more companies are putting products out there that contain insects. And in this post I want to show you the breadth and depth of products we have seen. Consumer Corner: Insect Protein, a Fad or Future Need? Insect Protein Has a History….. 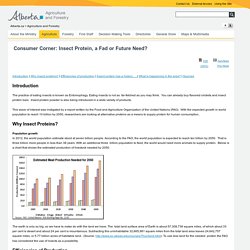 The eggs, larvae, pupae and adults of certain insect species have been eaten by man since prehistoric times and continue to be an item of human nutrition today. Human insect-eating is common to cultures in most parts of the world. According to the FAO over 1,900 species of insects are known to be eaten and form the traditional diet of at least two billion people. The total number of ethnic groups recorded to practice entomophagy is around 3,000. Entomophagy. Entomophagy (/ˌɛntəˈmɒfədʒi/, from Greek ἔντομον éntomon, "insect", and φᾰγεῖν phagein, "to eat") is the human use of insects as food. 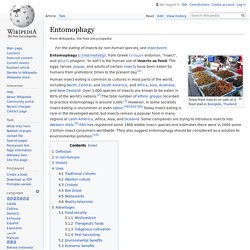 The eggs, larvae, pupae, and adults of certain insects have been eaten by humans from prehistoric times to the present day.[1] Human insect-eating is common to cultures in most parts of the world, including North, Central, and South America; and Africa, Asia, Australia, and New Zealand. Over 1,000 species of insects are known to be eaten in 80% of the world's nations.[2] The total number of ethnic groups recorded to practice entomophagy is around 3,000.[3] However, in some societies insect-eating is uncommon or even taboo.[4][5][6][7][8] Today insect eating is rare in the developed world, but insects remain a popular food in many regions of Latin America, Africa, Asia, and Oceania. Definition[edit] Mealworms presented in a bowl for human consumption In non-humans[edit] History[edit] Uses[edit] Traditional cultures[edit] Western culture[edit]