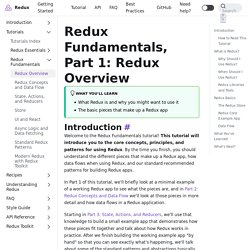 This tutorial will introduce you to the core concepts, principles, and patterns for using Redux. By the time you finish, you should understand the different pieces that make up a Redux app, how data flows when using Redux, and our standard recommended patterns for building Redux apps. In Part 1 of this tutorial, we'll briefly look at a minimal example of a working Redux app to see what the pieces are, and in Part 2: Redux Concepts and Data Flow we'll look at those pieces in more detail and how data flows in a Redux application. Starting in Part 3: State, Actions, and Reducers, we'll use that knowledge to build a small example app that demonstrates how these pieces fit together and talk about how Redux works in practice.

Algebraic Effects for React Developers - Reese Williams. It’s in words that the magic is—Abracadabra, Open Sesame, and the rest—but the magic words in one story aren’t magical in the next. 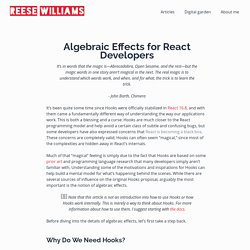 The real magic is to understand which words work, and when, and for what; the trick is to learn the trick.- John Barth, Chimera It’s been quite some time since Hooks were officially stabilized in React 16.8, and with them came a fundamentally different way of understanding the way our applications work. This is both a blessing and a curse: Hooks are much closer to the React programming model and help avoid a certain class of subtle and confusing bugs, but some developers have also expressed concerns that React is becoming a black box. These concerns are completely valid; Hooks can often seem “magical,” since most of the complexities are hidden away in React’s internals. 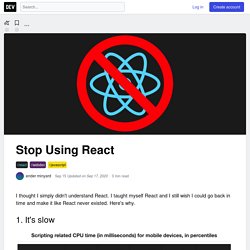 I taught myself React and I still wish I could go back in time and make it like React never existed. Here's why. 1. The Missing Introduction to React. Epic React by Kent C. Dodds. Learnreact.design. 5 React Projects You Need In Your Portfolio. The Next.js Handbook. I wrote this tutorial to help you quickly learn Next.js and get familiar with how it works. 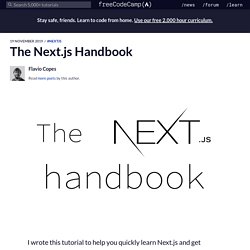 It's ideal for you if you have zero to little knowledge of Next.js, you have used React in the past, and you are looking forward diving more into the React ecosystem, in particular server-side rendering. I find Next.js an awesome tool to create Web Applications, and at the end of this post I hope you'll be as excited about it as I am. And I hope it will help you learn Next.js! Note: you can download a PDF / ePub / Mobi version of this tutorial so you can read it offline! Index. 5 React Projects You Need In Your Portfolio. You've put in the work and now you have a solid understanding of the React library. 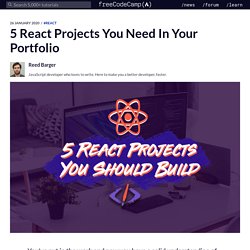 On top of that, you have a good grasp of JavaScript and are putting its most helpful features to use within your React code. The React Cheatsheet for 2020 □ (+ real-world examples) I've put together for you an entire visual cheatsheet of all of the concepts and skills you need to master React in 2020. 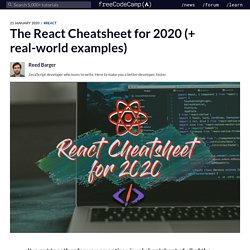 But don't let the label 'cheatsheet' fool you. This is more than a mere summary of React's features. My aim here was to clearly and concisely put forth the knowledge and patterns I've gained through working with React as a professional developer. Each part is designed to be immensely helpful by showing you real-world, practical examples with meaningful comments to guide you along the way. Want Your Own Copy? Grab the PDF cheatsheet right here (it takes 5 seconds).

Here are some quick wins from grabbing the downloadable version: Want To Learn React in 2020? Here's The Blueprint to Follow. At this point, there’s nothing stopping React. 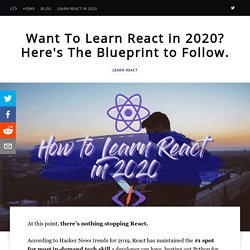 According to Hacker News trends for 2019, React has maintained the #1 spot for most in-demand tech skill a developer can have, beating out Python for the third year in a row. But React’s popularity isn’t limited to just employers—developers themselves are downloading and building projects with React nearly 3 million times per week. Navi – Frontend Armory. Curi Documentation. How Redux Works: A Counter-Example. After learning a bit about React and getting into Redux, it’s really confusing how it all works. 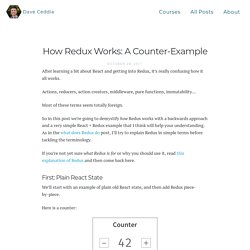 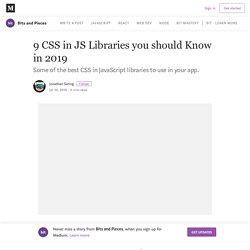 You can read this recommended discussion to help you make a good decision, and here’s a very cool comparison of projects. Good luck! 1. Testing Library · Simple and complete testing utilities that encourage good testing practices. Reactiflux. React.js Examples. React lifecycle methods diagram. Gosha Arinich. 11 React UI Component Libraries you Should Know in 2019. 5 Tools for Faster Development in React. React Redux Tutorial for Beginners [2019] December 13, 2018 - Edit this Post on GitHub Even though I have written a book about Redux in React, it may be too heavy on the subject for someone who wants only to try out a React Redux tutorial. 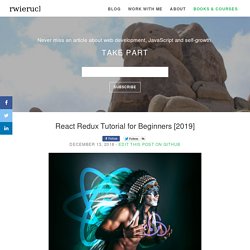 That’s why I extracted this chapter from my book to be read as a tutorial for beginners on my website for free to learn the basics about Redux and Redux in React. And who knows, if you want to dig deeper into the topic, you can still try out my book about Redux in React called Taming the State in React to learn more advanced techniques, best practices and enhancing libraries for Redux. Not all topics are explained greatest detail here, so I encourage you to give the book a shot afterward. React - Latest posts. Big collection of React hooks. The difference between Virtual DOM and DOM - React Kung Fu.

React attacks us with the virtual DOM right away, on the main page. This feature seems to be very important! But what does “virtual DOM” mean exactly? Just to get things straight - DOM stands for Document Object Model and is an abstraction of a structured text. 22 Amazing open source React projects. Material-UI. Essential React Libraries in 2018. January 11, 2018 - Edit this Post on GitHub React.js is only a view-layer library. Thus React only enables you to build component driven user interfaces. It comes with a couple of built-in solutions though, for instance local state management and syntactic events to make interactions happen, but after all you are only dealing with a view-layer library.

Learn React from the creators of React Router. Introduction. How Is React Different from Vue? Recently I published an article about the usage of top front end JavaScript frameworks. The two things that stood out were the dominance of React and the explosive growth of Vue. If current trends continue, it seems likely that by this time next year, Vue will have overtaken Angular as the second most used library or framework. Why Is React More Popular Than Angular?

It's fascinating to think about why one thing becomes more popular than another. Sometimes the reasons are clear, other times not so much. This is a particularly interesting question in the case of Angular and React. Angular, if we can refer to it as a single thing, used to be the most popular front end JavaScript framework by a wide margin. Fullstack React: 30 Days of React. GitHub - codebusking/react-pwa-guide-kit: React.js for Progressive Web Apps that say Hello! World. Vulgaire Developpeur. Why separating the signal from the noise is key for modern web developers. 19 Open Source React Component Libraries to use in your next project. The Hitchhiker's Guide to Modern JavaScript Tooling - React Kung Fu. A lot of developers coming to JavaScript world attracted by React.js are confused with the tooling used to produce modern JavaScript code. Webpack, Babel, ESLint, Mocha, Karma, Grunt… what should I use and which tool is doing what? JavaScript newcomers are often people coming from communities like Ruby and Java where opinionated, full-stack solutions exist.