Warm-Season Crops. Vegetables are classed as either warm- or cool-season, depending on the weather they need for best growth. 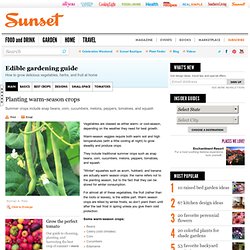 Warm-season veggies require both warm soil and high temperatures (with a little cooling at night) to grow steadily and produce crops. They include traditional summer crops such as snap beans, corn, cucumbers, melons, peppers, tomatoes, and squash. “Winter” squashes such as acorn, hubbard, and banana are actually warm season crops: the name refers not to the planting season, but to the fact that they can be stored for winter consumption. For almost all of these vegetables, the fruit (rather than the roots or leaves), is the edible part. 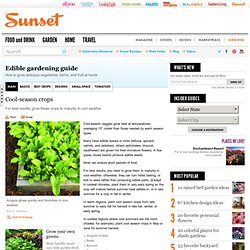 Rob D. Brodman Click to Enlarge Grow your own greens Make healthy meals easy with garden-fresh arugula, chard, lettuce, and more. Get our quick-start guidemore. How To Extend Your Growing Season. By using season extending techniques, you can harvest vegetables earlier and later in the season than would normally be possible. 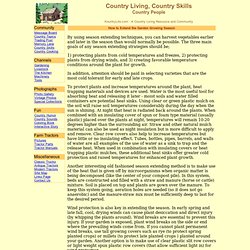 The three main goals of any season extending strategies should be; 1) protecting plants from cold temperatures and freezes, 2) protecting plants from drying winds, and 3) creating favorable temperature conditions around the plant for growth. In addition, attention should be paid in selecting varieties that are the most cold tolerant for early and late crops. To protect plants and increase temperatures around the plant, heat trapping materials and devices are used. Water is the most useful tool for absorbing heat and releasing it later - moist soils and water filled containers are potential heat sinks.

Another interesting old fashioned season extending method is to make use of the heat that is given off by microorganisms when organic matter is being decomposed (like the center of your compost pile). Wind protection is also key in extending the season. Eating Your Own Vegetables Year-Round. You can have your own fresh vegetables year round without a greenhouse by planting an early spring garden, planting a fall garden, overwintering hardy vegetables, using you garden for in-ground storage, and growing vegetables that can be stored for long periods. 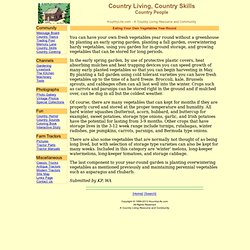 In the early spring garden, by use of protective plastic covers, heat absorbing mulches and heat trapping devices you can speed growth of many early planted vegetables so that you can begin harvesting in May. By planting a fall garden using cold tolerant varieties you can have fresh vegetables up to the time of a hard freeze. Winter Gardening: Best Winter Crops & Cold-Hardy Varieties. When we think of eating homegrown food during the cold season, we often think of staples such as potatoes squirreled away in the root cellar, or of vegetables such as winter squash stashed in a cool, dry place. 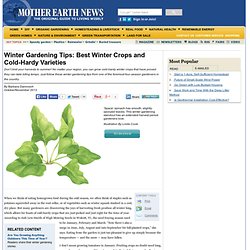 But many gardeners are discovering the joys of harvesting fresh produce all winter long, which allows for feasts of cold-hardy crops that are just-picked and just right for the time of year. According to Jodi Lew-Smith of High Mowing Seeds in Wolcott, Vt., the seed-buying season used to be January, February and March. “Now there’s also a surge in June, July, August and into September for fall-planted crops,” she says. Eating from the garden is just too pleasant to give up simply because the temperature — and the snow — may have fallen. Why Winter Is A Smart Time To Garden. Before you settle down to your long winter's nap, there's something you should do before dozing off. 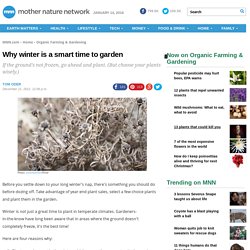 Take advantage of year-end plant sales, select a few choice plants and plant them in the garden. Winter is not just a great time to plant in temperate climates. The Best Frost-Tolerant Vegetables for Your Garden. How To Turn Your Backyard into a Four-Season Farm. According to Jack Algiere, the Vegetable Farm Manager at Stone Barns Center for Food and Agriculture, turning your garden into a four-season farm is easier than you think. 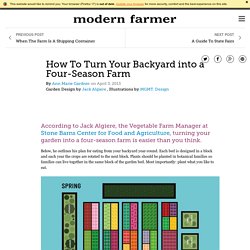 Below, he outlines his plan for eating from your backyard year-round. Each bed is designed in a block and each year the crops are rotated to the next block. Plants should be planted in botanical families so families can live together in the same block of the garden bed. Most importantly: plant what you like to eat. Spring, Year One. Building A Cold Frame.

The month of October was swallowed whole by family matters. 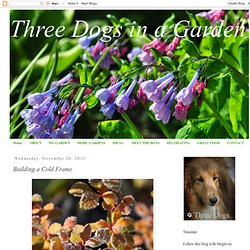 First my father-in-law passed away and then seventeen days later my mother-in-law slipped quietly away in her sleep. They were always good to me... to us all and I find myself tearing up just typing these words. For me, one of the ways grief expressed itself was a terrible tiredness that made me want to avoid anything routine; including the computer, the internet and blogging. It has been weeks since I posted anything. Slowly, slowly I am slipping back into the comfort of old familiar habits. Wow! The big Maple at the back of the garden always seems to be fall's swan song. Then there is frost and the Maple leaves fall like rain. Last week hubby took some time off and we busied ourselves with completing a number of ongoing projects including this cold frame.

I first became interested in cold frames a couple of years ago. Niki Jabbour, The Year Round Veggie Gardener Here you can sort-of see the four raised beds last spring. Winter-Sowing 101.