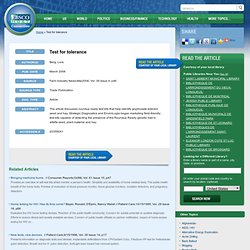 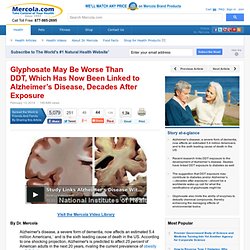 Mercola Alzheimer's disease, a severe form of dementia, now affects an estimated 5.4 million Americans,1 and is the sixth leading cause of death in the US. According to one shocking projection, Alzheimer's is predicted to affect 25 percent of American adults in the next 20 years, rivaling the current prevalence of obesity and diabetes.Such predictions are particularly distressing in light of the fact that Alzheimer's is a disease predicated on lifestyle, especially your diet.

Hidden factors such as toxic exposures can also play a distinct role.According to the featured article in the Los Angeles Times,2 researchers have linked DDT exposure to the development of Alzheimer's disease later on in life. The study, published in the journal JAMA Neurology,3 found that patients diagnosed with Alzheimer's had dramatically higher levels of the DDT metabolite DDE in their blood—four times higher, in fact—compared to people of similar age who do not have the disease.

According to Dr. I asked to be tested for glyphosate and... - Moms Across America. Glyphosate Testing Kits. Microbe Inotech Laboratories, Inc. 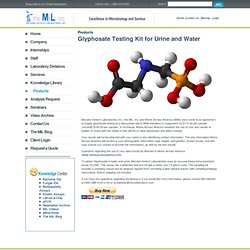 (the MiL, inc) and Moms Across America (MAA) have come to an agreement to supply glyphosate testing at a discounted rate to MAA members or supporters for $110.00 per sample (normally $145.00 per sample). Home Testing and Chemical poisoning. Top Ways to Flip Monsanto the Bird Daily. (ALTHeadlines) Everyday, more and more people are waking up and discovering that Monsanto and their many products are being found to be a hazard to human health. 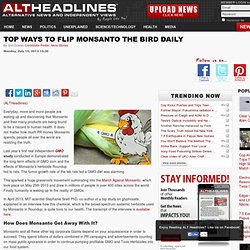 It does not matter how much PR money Monsanto spends, people all over the world are realizing the truth. Last year’s first real independent GMO study conducted in Europe demonstrated the long-term effects of GMO corn and the effects of Monsanto’s herbicide Roundup fed to rats. The tumor growth rate of the lab rats fed a GMO diet was alarming. Monsanto's Darkest Secret: Roundup's Effect On The Fetus. Dr. 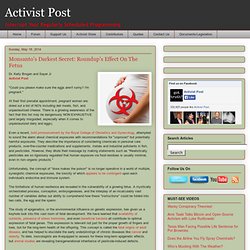 Understand what GMOs do to your body! RoundUp and Monsanto are killing us! ‘Monsanto’ guilty of Chemical Poisoning in France. Gluten Intolerant? You May Just Be Intolerant of Monsanto Weed Killer. Published on February 19th, 2014 | by Jason Louv Scientists suggest that Monsanto’s Roundup herbicide is what’s making people have such a nasty reaction to gluten Gluten has been a major news item for the last few years—not just for sufferers of acute gluten intolerance and celiac disease, but for increasing numbers of people who are seeking to eliminate gluten from their diet for general health issues, weight control, skin health and even mood. 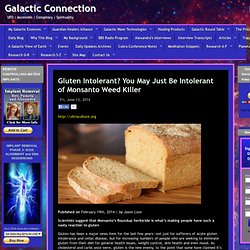 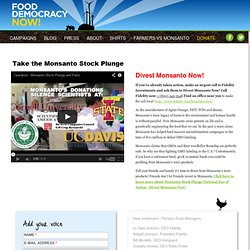 In its 100-year history, Monsanto has proven itself to be one of the most destructive companies on the planet, regularly creating toxic chemical products that cause severe harm to human health and the environment. Monsanto Controls both the White House and the US Congress. This incisive article by Josh Sager published one month before the November 2012 US presidential elections carefully documents how Monsanto has cornered the US political system. 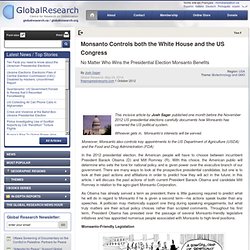 Whoever gets in, Monsanto’s interests will be served. Moreover, Monsanto also controls key appointments to the US Department of Agriculture (USDA) and the Food and Drug Administration (FDA) In the 2012 presidential election, the American people will have to choose between incumbent President Barack Obama (D) and Mitt Romney (R). With this choice, the American public will determine who sets the tone for national policy and is given power over the executive branch of our government. As Obama has already served a term as president, there is little guessing required to predict what he will do in regard to Monsanto if he is given a second term—his actions speak louder than any speeches. Monsanto-Friendly Legislation Government Appointment of Monsanto Associates. Monsanto Protection Act Signed By Obama, GMO Bill “Written By Monsanto” Signed Into Law. The bill states that even if future research shows that GMOs or GE seeds cause significant health problems, cancer, etc, anything, that the federal courts no longer have any power to stop their spread, use, or sales. 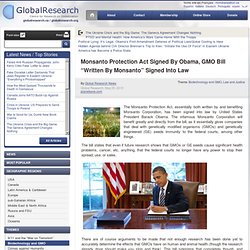 There are of course arguments to be made that not enough research has been done yet to accurately determine the effects that GMOs have on human and animal health (though the research already done should make you stop and think). This bill sidesteps that completely though, and simply states that even if there are problems, that the federal courts can no longer do anything about it. And this bill is now law, thanks to President Obama and the U.S. Congress. Some other interesting things to keep in mind: - The bill was apparently written by freshman Sen.