Teachers iPad Apps. Untitled. It’s the end of an era. 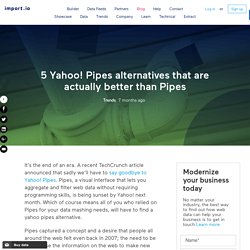 A recent TechCrunch article announced that sadly we’ll have to say goodbye to Yahoo! Pipes. Pipes, a visual interface that lets you aggregate and filter web data without requiring programming skills, is being sunset by Yahoo! Next month. Which of course means all of you who relied on Pipes for your data mashing needs, will have to find a yahoo pipes alternative. Pipes captured a concept and a desire that people all around the web felt even back in 2007; the need to be able to use the information on the web to make new things, find patterns and publish projects. As sad as we are to see a revolutionary technology like Yahoo Pipes bite the dust, we have to be honest that Pipes was getting pretty out of date. So, without further ado, here are 5 Yahoo! IF This Then That (IFTTT) is often cited as a direct Pipes descendent.

Zapier Zapier is basically the enterprise version of IFTTT, with a few added features. Import.io Magic Yahoo! Powerful data extraction platform Huginn. Twitter Literacy (I refuse to ... Post-Oprah and apres-Ashton, Twittermania is definitely sliding down the backlash slope of the hype cycle. 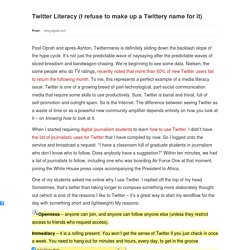 It’s not just the predictable wave of naysaying after the predictable waves of sliced-breadism and bandwagon-chasing. We’re beginning to see some data. Nielsen, the same people who do TV ratings, recently noted that more than 60% of new Twitter users fail to return the following month. To me, this represents a perfect example of a media literacy issue: Twitter is one of a growing breed of part-technological, part-social communication media that require some skills to use productively. Sure, Twitter is banal and trivial, full of self-promotion and outright spam. When I started requiring digital journalism students to learn how to use Twitter, I didn’t have the list of journalistic uses for Twitter that I have compiled by now.

One of my students asked me online why I use Twitter. Immediacy – it is a rolling present. A way to meet new people – it happens every day. Amazon. Wiki:Main Page. (Mouse over the webbrain below, click on nodes) February-March 2016. 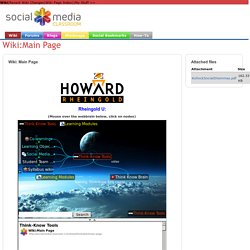 If interested, email howard@rheingold.com A six week course using asynchronous forums, blogs, wikis, mindmaps, social bookmarks, concept maps, Personal Brain, and synchronous audio, video, chat, and Twitter Cost for individuals is 300 dollars US or 500 dollars if employer reimburses -- via Paypal. 250 for graduates of Rheingold U courses ($200 if you've taken two courses, etc.) Class cohort limited to 30 learners. About this Course Think-know Tools dives into both the theoretical-historical background of intellect augmentation and the practical skills of personal knowledge management.

As with other Rheingold U. courses, Think-Know Tools involves 6 weeks of Graduates of Introduction to Mind-Amplifiers can treat Think-Know Tools as an extension of what we covered before. Learning objectives About this course: Expect participative and collaborative learning Schedule Missions Lexicon Texts Session Wiki Pages. Wiki:Schedule. Missions Texts Main Syllabus Page Before the course starts: Get started on the texts a week or more in advance and try to stay at least a week ahead. 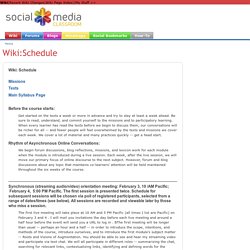 Be sure to read, understand, and commit yourself to the missions and to participatory learning. Rhythm of Asynchronous Online Conversations: We begin forum discussions, blog reflections, missions, and lexicon work for each module when the module is introduced during a live session. Synchronous (streaming audio/video) orientation meeting: February 3, 10 /AM Pacific; February 4, 5:00 PM Pacific. The first live meeting will take place at 10 AM and 5 PM Pacific (all times I list are Pacific) on February 3 and 4 .