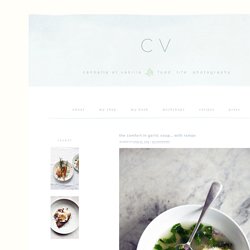 He had an exquisite palate – fowl, baby eels, barnacles, lobster… A true pastry chef who had been cooking since the age of 14. He was also a man who appreciated simplicity and the art of doing things orderly and well. There was such discipline to his work yet he appreciated certain chaos outside of it, which I find very inspiring in my life right now. But I digress. My grandfather also had a very sensitive digestive system and suffered from ulcers on and off all his adult life. So if you ever need a little soup that takes less than 30 minutes to make, give this one a try. And then came the ramps, also known as wild garlic or wild leek. I have been adding them to so many things. A tart similar to this, Tortilla with lots of ramps, Roasted with sea salt, Scrambled into eggs, In this soup in lieu of peas. serves 4. Vegan Creamy Curried Cauliflower Soup. Curried Coconut Carrot Soup. Braised Coconut Spinach &amp; Chickpeas with Lemon. Slow-Simmered Pinto Beans with Crema and Queso Oaxaca.

Unlike many of my food-loving peers, I don't belong to a CSA. 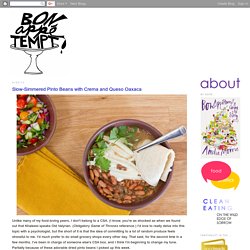 (I know, you're as shocked as when we found out that Khaleesi speaks Old Valyrian. (Obligatory Game of Thrones reference.) I'd love to really delve into this topic with a psychologist, but the short of it is that the idea of committing to a lot of random produce feels stressful to me. I'd much prefer to do small grocery shops every other day. That said, for the second time in a few months, I've been in charge of someone else's CSA box, and I think I'm beginning to change my tune.

About three years ago, I made some slow-simmered pinto beans that were just OK. Uhm, bingo! (Apparently queso Oaxaca is Spanish for giant string cheese.) Passover Recipe: Chicken Soup with Shallot-Shiitake Matzo Balls. I am all for getting creative in the kitchen, but sometimes, you just don't want to mess around with a classic. 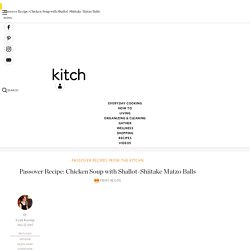 Take chicken soup. Whether you call it "goldene yoich" (golden broth in Yiddish), "Jewish Penicillin," or just plain old soup, not much can top the basic, soul-satisfying combination of tender chicken, carrots, celery, and onions swimming in soothing broth. But you can bring a touch (just a touch!) Of something new to the classics, like with these savory, intensely delicious shallot-shiitake matzo balls. People tend to get a little particular about what foods they expect to see on the Passover table. Creamy Watercress Soup with Lemon-Goat Cheese Dumplings Recipes from The Kitchn. When Cambria asked Faith and myself for some help coming up with a main course for her Spring Vegetarian Dinner Party for Six, at first we couldn't decide. 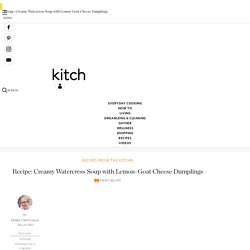 Faith thought it should be creamy and green. Cambria wanted a vegetarian dish that wasn't just another platter of pasta. I advocated for something satisfying and hearty, but still light enough for a spring meal. The final vote was unanimous: a pureed soup of peppery spring watercress served with warm goat cheese dumplings. Done and done. Spring Turnip Soup with Garlic Chickpea Croutons Recipes from The Kitchn. Ahh, springtime. 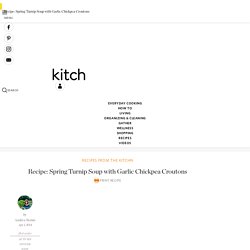 You know it's springtime in the Pacific Northwest when you need to change your clothes multiple times a day. Winter hat and gloves in the morning — yep. T-shirts and plenty of sunscreen to get through the afternoon — for sure. Rain boots and a rain coat around 4 pm — definitely. Springtime on our farm is an exciting time of the year even if the weather is all over the place. Quick Coconut Chicken Soup. At the tail-end of winter, I'm often tempted to buy out-of-season produce flown in from far-flung regions. 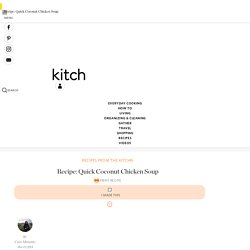 This week I'm taking a big breath, putting the asparagus down, and giving rutabagas and potatoes a last hurrah. They're the perfect additions to this Thai-inspired chicken soup, adding a hearty note that feels just right for the equinox. Simmered in a silky coconut broth, diced root vegetables take on heady aromas of ginger and lemongrass. Chicken breast is my protein of choice, making this a meal in a bowl. Scallops with Lime & Cilantro. All you need to do is stop at the grocery store on the way home from work tonight and pick up five things: a pound of scallops, a bottle of white wine, organic chicken stock, a lime and a bunch of cilantro. 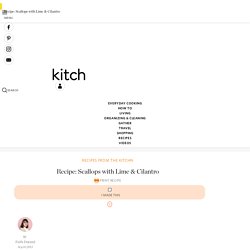 In about half an hour you can put a bowl of pasta or rice on the table with sweet golden scallops in a tangy, garlicky broth. Aren't scallops wonderful? Scallops are one of my favorite weeknight meals, and here's why: They cook in literally three minutes. Bon Appétempt: Mexican Corn-and-Poblano Soup. My decision to make this recipe was based solely upon the above gorgeous photo. 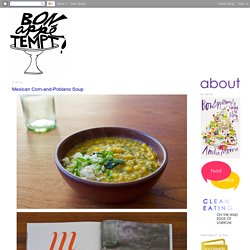 I then mindlessly wrote down the ingredients and grocery shopped. So it wasn't until I was halfway through making it and tasted it that I began to worry about how flavorful it was going to be. Vegan Creamy Curried Cauliflower Soup. A simple puréed soup is something I turn to often, usually relying on a creamy tomato, but lately I've been relying instead on a lightly spiced cauliflower soup. 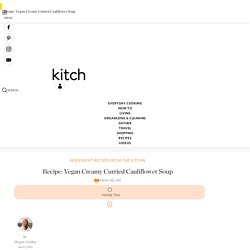 Cauliflower is easy to come by and quite inexpensive at the markets (in Seattle, anyway), so as you sit and wait for true spring produce (peas, favas, asparagus!) , this is a good recipe to tide you over. The nice thing about this recipe is that it takes very little time to pull together. You simply cook down the onions and garlic with cauliflower, broth, and warm spices and ready your favorite toppings (I like crisp parsley, toasty cashews, and spicy red pepper flakes — all with a dash of olive oil).

A few notes about this soup: You will likely buy a can of coconut milk (13.5 ounces), but this recipe only calls for one cup. Last, this recipe asks that you go easy on the salt during the preparation, but do feel free to season with additional salt and pepper once it's done cooking. Easy Green Minestrone. Sometimes you just want to sit cross-legged on the couch and eat a big bowl of soup. 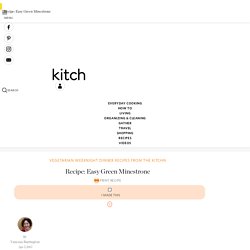 Something simple and comforting. Something good. You need a homemade bowl of soup and you don’t want to go to much fuss to get it. Well, here's an easy minestrone that can be made almost any time of year, as long as you have a few vegetables in the fridge and some broth to cook them in. Rosemary & Lemon Chicken Minestrone Soup. There are recipes that happen because one has a grand vision, and then there are those that happen because one is hungry, but lazy. This is one of those. What I really wanted was meatball soup, but meatballs required, well, making meatballs. I was hoping for something a little more one-pot, one-bowl.

Lucky for me, this soup gave me the chicken meatball goodness I desired. But, you know, without the meatballs. Immunity Soup Recipe. This soup is built on a monster white pepper broth. White pepper with jolts of ginger, and stabs of garlic. I like it just shy of scalding, racing down my throat, sweeping through my sinuses in one boisterous, fragrant swoop. This is a soup I make often, particularly when I need a boost. And, while I float other ingredients in the broth, mostly to make a meal of things, that part of the equation is usually an after thought. Korean Pumpkin Porridge with Rice Dumplings (Hobakjuk) Across Asia, dumplings symbolize good luck for the Lunar New Year. In preparation for this year's celebration, I decided to learn how to make one of my favorite dumpling dishes, the Korean hobakjuk or pumpkin porridge with sweet rice dumplings. If you aren't familiar with the Asian tradition of sweet soups and porridges, it might help to think of this as a pudding.

In addition to the velvety pumpkin, it has delightful mochi-like rice balls and makes a delicious winter breakfast or subtly sweet dessert. You can make this with kabocha, butternut squash, or most any winter gourd as long as it's naturally sweet. Sunchoke and Garlic Soup. It's hard to write about sunchokes without mentioning two things: the name is confusing, and they can cause embarrassing gas. So let's get those two topics out of the way. First of all, sunchokes are also known as Jerusalem artichokes. They are neither from Jerusalem (they are native to the Northeastern United States), nor are they artichokes. They are actually tubers of a sunflower-like plant. "Sunflower" is girasole in Italian (look toward the sun) and, well, girasole sounds a bit like Jerusalem. Scallops with Lime & Cilantro. Creamy-Yet-Light Fish Chowder. Cooking for my family during a holiday visit to Seattle, I came up with this chowder as a light yet comforting weeknight dinner to give us a break from the rich holiday meals we had been eating.

The broth skips the usual milk or cream and is instead thickened by pureeing cooked potatoes and aromatics into a creamy, flavorful base studded with chunks of mild white fish and soft vegetables. Warm, satisfying and not too heavy, this dairy-free soup is the perfect meal for a chilly January evening. I have a confession: this soup was originally going to include a little dairy. My husband is a Massachusetts native and is very particular about his seafood chowders, so I felt that a completely dairy-free version wouldn't fly. But as I was cooking, I realized the half-and-half I had grabbed at the store was actually flavored with vanilla and there was no milk in the house. Creamy-Yet-Light Fish Chowder. Italian Wedding Soup. When it comes to soups, I can easily say I have a hands-down favorite: Italian Wedding Soup.

My experience of it is neither particularly Italian, nor is it matrimonial, rather it was one of the first real meals my mother fed me when I was a baby. The legend is that I'd slurp it loudly, humming, and the broth would dribble down my neck, soaking the neck of my shirt. Sweet Potato & Lima Bean Soup. In this harried, indulgent time of year what I actually crave most is food that's simple and nourishing, something that doesn't take a lot of time or fuss to eat but provides warmth and balance.

Wholesome Recipe: Roasted Vegetable Soup with Herb Dumplings Recipes from The Kitchn. The dish I'm about to share is really two recipes in one – heavenly together but also good building blocks for many other meals this fall and winter. First up is a creamy, yet dairy-free, soup with roasted fall vegetables like butternut squash, sweet potatoes, carrots, and parsnips. Then come the dumplings. Roasting the vegetables amplifies and deepens their flavors. Vegetarian Pho (Vietnamese Noodle Soup)

There are few better comfort foods than Vietnamese phở. Easy Green Minestrone. How To Make French Onion Soup. French onion soup is a bistro classic, the most homey and delicious example of good cafe cooking. But only a handful of frugal ingredients make up this restaurant favorite. Hot &amp; Sour Soup with Mushroom, Cabbage, and Rice. Have the spring blues seized you? Minnesota Wild Rice &amp; Mushroom Soup. Maybe it's just residual from the holidays, but I've been feeling rather homesick lately. No surprise that this manifests as food!